After the surgery, my hand was completely calm. It was just a happy feeling 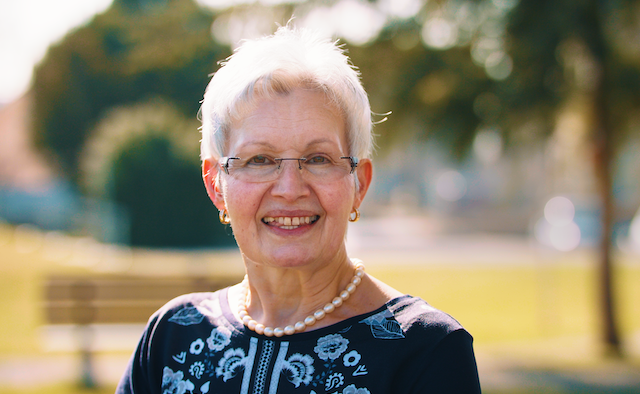 We hear from Monika Rudow about her experience of deep brain stimulation – from how she initially felt “ashamed” by her Parkinson’s disease diagnosis, to how the therapy has impacted her symptoms

“The first time it started was in 2006. I was sitting in church – my parents had a golden wedding anniversary – and my leg started shaking.”

“It just started shaking – I couldn’t keep it still,” she says. “I was very stiff. My legs felt heavy every time I went out.”

What Monika didn’t know at the time is that the symptom is a hallmark of Parkinson’s disease and around 70% of people with the condition are thought to experience it.

Getting the right diagnosis

Monika sought the help of experts to find out what was wrong with her leg – but none of the doctors she saw gave her a Parkinson’s diagnosis.

Situations like these are “very typical”, says Professor Sergiu Groppa, head of movement disorders and neurostimulation at the Johannes Gutenberg University of Mainz, Germany: “A lot of patients need time and consult different specialists before an admission to a movement disorder centre is done.”

When Monika found out she had Parkinson’s disease in 2007, she decided to keep her diagnosis private. “I felt ashamed that I have Parkinson’s,” she says. “I didn’t tell anyone, except my husband, my son and my mother. And I asked them not to talk about it.

In 2009, Monika’s mother handed her a newspaper with an article about deep brain stimulation (DBS) – a type of surgery in which electrodes are placed in specific areas of the brain to help manage and treat symptoms of Parkinson’s disease. 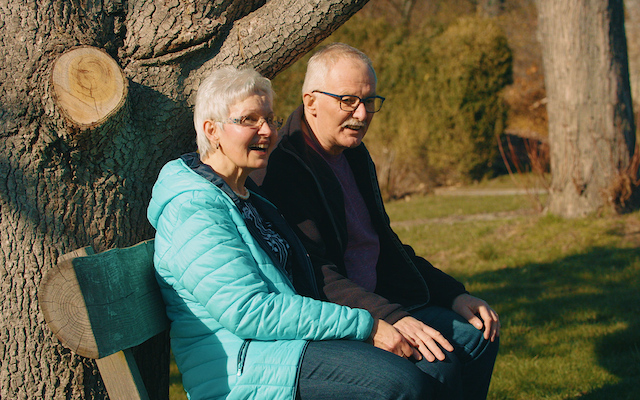 Monika and her husband, Heinz.

Monika decided that the surgery could be a treatment option for her in the future, when her symptoms worsened. She told her husband and son: “Let this DBS system be implanted, because it’s just good and it will help me. I don’t want to always take medications like levodopa or through pumps and tubes.”

When is the right time to consider DBS?

“Deep brain stimulation is a medical technology that was developed in the last 25 years to efficiently modulate and improve movement disorders, like Parkinson’s disease, tremor, dystonia,” explains Professor Groppa.

Often in Parkinson’s disease, medication can only “partially improve” motor symptoms, says Professor Groppa. “If there is no improvement in daily living with medication, the option of deep brain stimulation should be considered.”

Before recommending DBS treatment, Professor Groppa says it’s important for healthcare professionals to “intensively inform the patients about the hardware, about the available systems”.

Patients at his clinic are able to see the device and leads identical to the ones that are used during the procedure. This, he says, gives people with Parkinson’s “a better feeling about what happens during the surgery”. 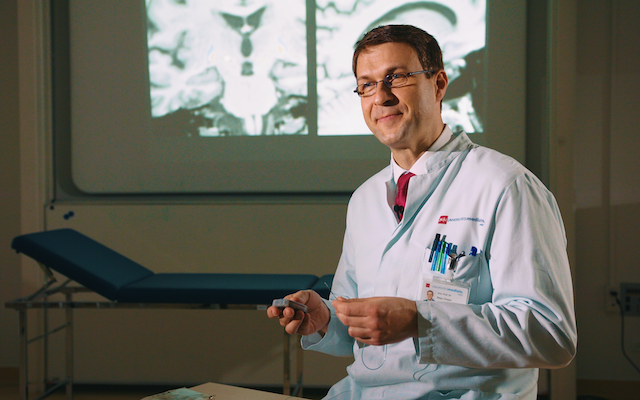 For Monika, who underwent her surgery in 2018 because of fluctuating motor symptoms, DBS hugely improved her tremor.

“After the surgery, the professor came and said: ‘So, now we turn on the device,’” Monika says. “He activated it and [there was] no shaking at all. My hand was completely calm. It was just a happy feeling.”

Her husband, Heinz, adds that “the difference between before and after is actually indescribable. What she could do before, or what she only could do with tremors and other restrictions, versus everything she could do after the operation – anyone who wasn’t there to witness it wouldn’t understand it,” he says.

Now, four years after the procedure, Monika explains that her quality of life is “much better”.

“I feel really good,” she says. “I can do everything again.”

What you need to know about DBS

There are patients who have different expectations from the results of their procedure, and we have to address this. We have to have a workaround to decide why the effects and results are not comparable to the expectations of the patient.

What are some of the risks of DBS?
If we speak about surgery associated side effects, they are very rare – about one in every 200 patients. But they are something that patients have to know about.

There are also stimulation-associated side effects. These are also rare, and we now have the technology to improve side effects or to eliminate them completely and increase the efficacy of the stimulation.

What happens before the procedure?
The preparation for the surgery is very important. Patients come to our clinic for a couple of days for in-depth assessment, with MRI scans, neuro-psychological assessments with motor testing, to eliminate or reduce the risk of deep brain stimulation.

What happens after?
In most cases, several adjustments are needed after the implantation. Most of these are done during the first six months after implantation.

After several years, a replacement is needed. Generally, this is not a huge issue for patients. They come into the clinic and the procedure is done in 30 to 45 minutes and they are very soon at home again and can continue their daily lives. If a new generation of a device or further technological developments are available, then they can be offered to the patient at this point.

This article is sponsored by Abbott. The information in this article is given for information purposes only and does not represent an endorsement by Parkinson’s Europe of any particular treatments, products or companies. This article is not a substitute for advice from your doctor, pharmacist or other healthcare professional. Parkinson’s Life makes no representations or warranties of any kind, express or implied, about the completeness or accuracy of information provided.

After the surgery, my hand was completely calm. It was just a happy feeling