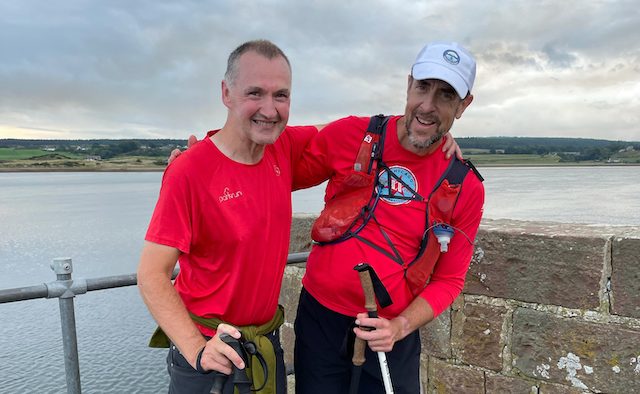 When Bill Bucklew and John MacPhee took on an arduous walk from a Scottish village to London, they forged a “life-long friendship” – while raising thousands for Parkinson’s research. They share why they think their trip can serve as a metaphor for “anything that anybody wants to do with Parkinson’s”

Bill Bucklew, a campaigner based in Chicago, first spoke to John MacPhee in 2017 when he reached out for advice on a walk he’d been planning across the US. John was based thousands of miles away in Scotland, but one piece of emailed wisdom that he offered – to find a way to ‘say goodbye’ to his walk after completing it – stuck with Bill over the years.

“John telling me to ‘let go’ of this first walk was kind of like a challenge to me,” explains Bill. A few years later, as he started planning a trip to London, UK, to take part in the city’s marathon, he decided to get back in touch with John to “do something big, raise some awareness and raise funds”.

The resulting project was a 670-mile walk from John O’Groats, a village in the north of Scotland, to London – which saw the duo raise around US $100,000 for the Michael J Fox Foundation, Cure Parkinson’s and Parkinson’s UK.

After completing the walk, Bill and John talked to us about their experience taking on this challenge, how they stay inspired – and what they wish people knew about Parkinson’s disease.

Tell us about your Parkinson’s diagnoses.

Bill Bucklew: It was horrible. One spring morning in 2005, I was running and I had this tightness in my leg. And from that day forward, I continued to have it, but it got worse and worse. I didn’t have a tremor or anything like that – all the experts thought I had sciatica (pain caused by an irritated nerve). I thought I had a psychological problem because I went through all sorts of physiotherapy, and no one could figure it out.

Eventually I went to a neurologist and was diagnosed, but it was a seven-year process. In some ways, I was just happy to have an answer at that point, but when I found out it was Parkinson’s, I really didn’t even know what it was. I knew it was something that ‘affected older people’. It was like a punch in the stomach.

John MacPhee: I was diagnosed a lot quicker. I blamed forks and spoons for a few months. We’d gotten new cutlery, and I just couldn’t grip it properly. That became more progressive, in that I was shaking when I wasn’t holding the forks or knives.

I took diagnosis badly, initially. My first thought was, “Here’s my future being robbed of me.” I want to be playing golf until I’m 80. I just want to be involved in life. And when I got my Parkinson’s diagnosis, I felt like somebody was stealing that from me. You need to learn very quickly to put that to one side. You just decide, “Right, I’m going to have to make the most of it.”

Your fundraising walk for Parkinson’s is certainly an example of ‘making the most of it’. What was the experience like?

Bill: We started at John O’Groats and looked down at Great Britain – and you can’t process that trip in that moment. That’s a metaphor for anything that anybody wants to do with Parkinson’s. If you want to walk around the block and you have balance issues, you’ve got to just take one step at a time – and that’s what we did. You run into problems, you solve the problems, and you keep going. I think that’s the real message is: ‘Keep at it’.

Bill: The people were the biggest surprise – how amazing they were along the way. It just reinvigorates your belief in humanity. On the second or third day, I was having some physical problems, so I was lying in the back of the RV and I heard these bagpipes kick in as we were stopping. We got out, and realised there was a reception for us. Everyone in this massive vacation park had collected money, the local grocery store had put together food for us… That kind of set the tone for continuous examples of people helping us along the way. It was just incredible. 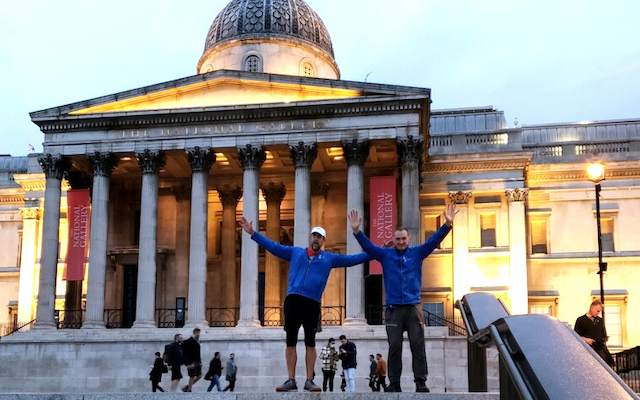 How has meeting others in Parkinson’s community inspired you?

I remember walking with Parkinson’s campaigner and former darts commentator Dave Clark on his UK coast-to-coast walk five years ago. He was waiting for his medication to kick in and it was painful for him to take a step. I still reflect on that when I’m struggling, and think, “Can I take one more step? Yeah, bloody Dave Clark can do it – I’ll do it.” You end up with this extra quiver full of arrows that you can use against Parkinson’s, of different experiences and the way people tackle them. Maybe I’ve been lucky with the people I’ve met. But I do think there’s a common theme with folks that have Parkinson’s: they are very resilient.

What advice would you give to people who want to start fundraising for Parkinson’s charities?

John: My advice would be don’t do something tremendously difficult. Do something that’s pre-organised because it’s so much easier, it’s so much less stressful, and you’ll get a lot out of it. Dip your toe in gently.

You also have to ask yourself, “Why am I doing this?” Is to raise money? If you’re raising money, what is that money going to be used for? The more specific you can be, the better chance you’ve got to be passionate about it.

Bill: My advice would be to worry a little less about fundraising, and focus more on finding something that you’re passionate about and that’s going to help you improve yourself. I think the donations will follow, because people will be inspired by what you end up doing. 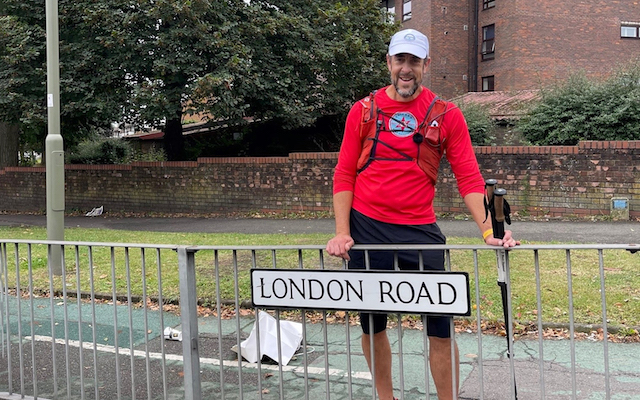 Bill says the experience has encouraged him to continue making “meaningful” connections.

What hopes do you have for the future of Parkinson’s awareness?

Bill: I still find myself hiding my symptoms, not only from other people, but from myself. I do all these big events, I run marathons – but I can’t button the sleeve on my shirt with my right hand. I could sit here for 20 minutes trying to do it. How do you get that across to people? Getting out of bed in the morning, it can take a half hour, right? Nobody sees that. Nobody sees the struggles that we go through.

I guess if I don’t feel comfortable around people with my own condition, then I think that must be a feeling that most people share. I would love a day when we could all feel comfortable being completely ourselves around others.

John: When we were on the walk, my aim was to try bumping into people I could speak to, because I wanted us to branch out beyond Parkinson’s community.

Now and again, we have Parkinson’s day or Parkinson’s week or Parkinson’s month – but we don’t really get the story out beyond Parkinson’s community. If folks know anything about Parkinson’s, they think it’s a shake – but not that everything you do has changed because you’ve got this worsening condition.

Bill: One of my biggest goals, coming out of this experience, is to really figure out ways to share things more meaningfully – because the connections we made with people during our walk were real. How can we get better at making those connections? That’s what I’m really challenged to do.

Bill Bucklew lives in Chicago, US, with his wife, Heidi, and two children. Having completed an impressive range of fundraising events since he was diagnosed with Parkinson’s, he is currently finishing a series of world marathons, and planning to undertake the Marathon de Sables – a 150-mile race across the Sahara Desert.

John MacPhee lives near Perth, Scotland, with his wife Yvonne. They have four grown-up children. John has taken part in fundraising events across the globe, including walking the length of the UK and participating in the WOW Cyclothon – a 1,400km ride in Iceland.