We cycled past glaciers, icebergs and lakes of the deepest shades of blue, green and white. 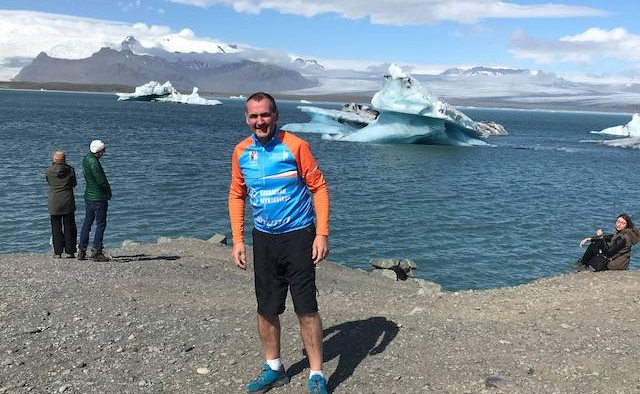 Parkinson’s campaigner John MacPhee talks us through the WOW Cyclothon – a gruelling 1,400km ride around the perimeter of Iceland that must be completed within three days. Together with his team, Parkinson’s Power, they pushed past their symptoms and completed the event in an impressive 57 hours – raising nearly UK £20,000 in the process

Hi John, thanks for chatting with us. Can you introduce yourself to our readers?

Of course, I’m retired now but used to work for the Scottish Tourist Board, and I was diagnosed with Parkinson’s seven years ago, when I was 46. I currently live in Perthshire, Scotland.

How did it feel when you were first diagnosed?

I had known something was wrong, but had hoped it was going to be a trapped nerve or something else less serious. The diagnosis came as a shock and initially I felt very angry and bitter. I thought my future had been taken away from me. I soon readjusted however, and learnt to let go of those negative feelings.

I told my family and my workplace straight away. My managers supported me as much as they could but by 2014 I couldn’t carry on at work anymore, so I had to retire.

What inspired you to take on the WOW Cyclothon, a 1,400km race around the perimeter of Iceland?

I googled ‘great cycle routes around the world’ and the one in Iceland caught my imagination, mainly because it was one single route around the perimeter of the country.

Initially I thought I would do it alone over the course of two weeks – but that soon proved too expensive. That’s when I got in touch with Snorri, a campaigner with Parkinson’s living in Iceland, and discovered the WOW Cyclothon. It was the same route but in 72 hours and therefore a much cheaper alternative.

I asked Snorri if we could get a team together, and he actually responded with a thumbs down emoji – but 10 minutes later he emailed me saying: ‘Sorry, Parkinson’s fingers! It’s a yes from me!’.

We recruited 10 team members (five of whom have Parkinson’s) from Canada, Ireland, Iceland and Scotland and decided on our team name, ‘Parkinson’s Power’. 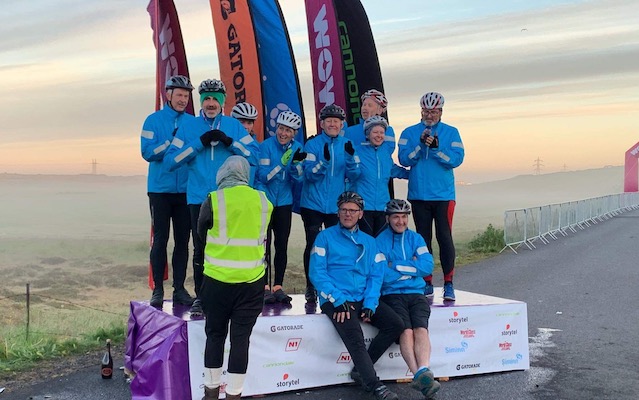 I started training in November 2018, so that was seven months before the event. It was the first time I had been on a road bike since doing a paper round when I was 13 – so that was interesting.

Over time I noticed myself improving. Generally, I was getting up hills without nearly killing myself and so started to feel more confident about the challenge. As all my teammates live far and wide across the globe, we didn’t get to train together at all. In fact, we met for the first time the day before the race, but we all gelled immediately.

Our plan was to set off from Icelandic capital Reykjavik on 26 June, and loop around the whole island in under 72 hours. In the end, we actually completed it in an astounding 57 hours.

The hardest part was keeping our focus. We completed the loop as a relay and changing riders constantly meant I only got about two hours sleep.

The weather was also erratic to say the least. I like to say in Iceland they have weather samples, not weather, and we must have sampled every single type – from gale force winds to torrential rain and pleasant sunshine.

But it was all worthwhile for the incredible views that we enjoyed. We cycled past glaciers, icebergs and lakes of the deepest shades of blue, green and white. It was stunning.

Did your Parkinson’s symptoms become more obvious to you during the cycle?

Overall, I found the exercise actually helped – but the drop off from ON and OFF periods was significant.

I noticed it more in other people than myself. For example, Snorri was a brilliant cyclist, but during his OFF periods he couldn’t stand, he teetered and had to be held up. When he was on his bike though, it was a totally different story.

What were your highlights from the trip?

Crossing the line together was fantastic, and a hugely emotional moment. We celebrated by having a group hug and passing round a bottle of prosecco.

Another highlight would be the Icelandic people themselves, they were incredibly hospitable and generous. Snorri, who is involved with a Parkinson’s association in Iceland, asked if members could help by providing riders with food and drink along the way. One Icelandic family invited us in and gave the whole team the most delicious bowl of fresh soup and bread. It was clear they weren’t the most advantaged family in the world, but there they were sharing what they had with us.

How much have you raised in total and what are your future fundraising plans?

We’ve raised approximately UK £20,000 in total and will be sharing it between The Cure Parkinson’s Trust and the Michael J Fox Foundation. I haven’t got any other fundraising plans right now but it will probably be another bike ride – just don’t tell my wife!

We cycled past glaciers, icebergs and lakes of the deepest shades of blue, green and white.