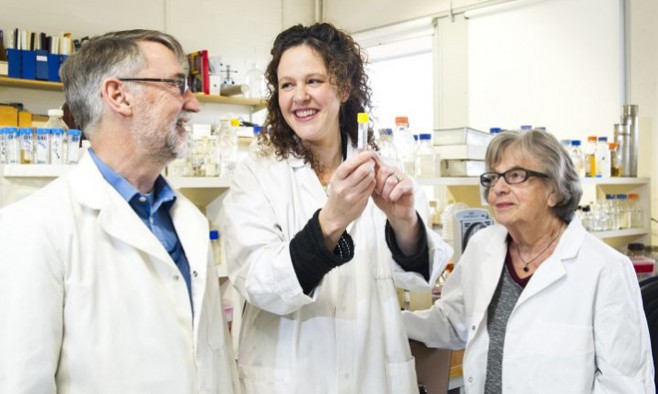 Researchers in Australia have developed a world-first diagnostic blood test that could give doctors a simple, accurate way of diagnosing Parkinson’s disease

Imagine being able to run a simple blood test that could tell you if someone has Parkinson’s disease or not.

This could be a reality in as little as five years, according researchers at La Trobe University in Australia who have developed the world’s first blood test for Parkinson’s.

The group of researchers believe the laboratory test will enable doctors to detect with unprecedented reliability the abnormal metabolism of blood cells in people with Parkinson’s.

This means that a diagnosis could be determined earlier and without the need for a brain scan. In turn, doctors will be able to provide treatment options much earlier to the benefit of patients.

Currently no clinical biomarker test exists for Parkinson’s and the only means of diagnosis is by neurological examination. By the time patients develop symptoms and undergo the exam, large numbers of vital brain cells have already been destroyed.

“This is a really exciting discovery. Early diagnosis and treatment could enable a greater quality of life for people with the condition”

Paul Fisher, La Trobe Professor of Microbiology, said: “This is a really exciting discovery. Parkinson’s is a debilitating disorder and currently there is no cure. However, early diagnosis and treatment could enable better outcomes and a greater quality of life for people with the condition, which will be of great benefit to sufferers and their families.”

The US-based Michael J Fox Foundation for Parkinson’s Research (MJFF) and its local funding partner, the Shake It Up Australia Foundation, have granted La Trobe more than AU$640,000 to further develop the diagnostic blood test. The test could be available to the public in as little as five years if sufficient additional funds can be raised for its rapid development.

“The MJFF grant will allow us to extend our study so we can discover new ways to help diagnose and monitor progression of the disease. It is even possible that the blood test could be developed to detect all types of neuro-degenerative disorders, including Alzheimer’s,” Fisher said.

Susanna Lindvall, vice-president of Parkinson’s Europe, said: “This discovery appears to be very promising and we look forward to further information about this exciting work, which could provide us with far greater knowledge about the underlying mechanisms of Parkinson’s disease.”

Diseases such as Parkinson’s and Alzheimer’s have long been believed to involve malfunction of cell mitochondria – which are the cells’ energy factories.

About a decade ago, Professor Fisher’s lab discovered that a permanently switched on ‘alarm’ at the cellular level could be responsible for symptoms in many incurable conditions involving defective mitochondria.

This led to an important new understanding of how mitochondrial defects damage cells – namely that it is a signalling disorder, rather than a fundamental energy insufficiency as previously thought.

“We realised this had important implications for understanding many different forms of mitochondrial disease, as well as most major neurodegenerative disorders,” he said.

Professor Fisher said he and his team demonstrated for the first time (using a laboratory organism called Dictyostelium, or Dicty) that an energy- and stress-sensing protein, known as AMPK, was permanently activated in mitochondrially diseased cells.

When energy production was compromised, this protein began signalling and interfering with other signalling pathways, causing cell functions to shut down.

Professor Fisher’s team then joined forces with Dr Danuta Loesch-Mdzewska, Dr Sarah Annesley and other collaborators to extend their studies in Dicty to cells from Parkinson’s disease patients.

The results were both dramatic and surprising.

Professor Fisher said in people with Parkinson’s, something causes their cells to become ‘hyperactive’, which in turn increases the production of toxic oxygen by-products and over time damages vital cells in the brain.

Apart from developing a definitive blood test, Professor Fisher said further work on differences in blood cells from Parkinson’s patients and healthy control groups might also open a window to the underlying mechanisms of the disease.

We hear from the woman taking on the Atlantic Ocean