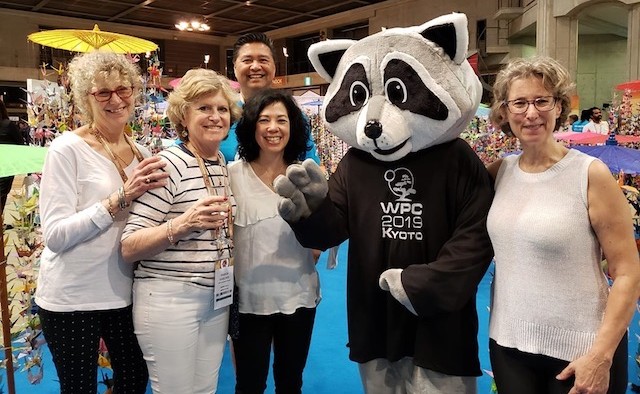 In the second in our series on this year’s World Parkinson Congress, US blogger Sharon Krischer shares her diary from the event in Kyoto, Japan. From ‘wonderful’ performances to in-depth discussions, Sharon reflects on a productive week meeting campaigners from all over the world

After an 11-day cruise and two exhausting days seeing all of the wonderful sights the city has to offer, I spent today relaxing with my husband and friends before we parted ways at Kyoto Station.

The rest of the group headed off to a baseball game in Osaka and I went to the Kyoto International Conference Center for the opening of the World Parkinson Congress. I put up a poster I made in the exhibit hall and then met up with friends who were also attending the congress.

The opening session was wonderful to watch – from a flying crane to taiko drummers. More than 3000 people from 55 countries were in attendance, and much of the evening centered on the topic of hope. We watched the winning video in the World Parkinson Congress Video Competition. It was titled ‘Keep Hope Alive’ and featured the late Tom Isaacs being interviewed by filmmaker Anders Leines.

I finally met Parky friends who I had met online, and it reinforced the fact that our common bond of Parkinson’s brings us together – and that we provide unconditional support for each other.

We started today at a plenary session called ‘What is Alpha Synuclein?’. I felt that the presenters were really speaking to the researchers in the room, not the people with Parkinson’s, so my husband and I left to find something more interesting. I later found out that we missed a talk about participating in clinical trials.

Next I gave a talk about my poster called ‘What are the most important factors for living well with Parkinson’s Disease? An informal survey from a women’s Parkinson’s Facebook group’. I enjoyed talking to the people about the poster I made, some were readers of my blog ‘Twitchy Woman’ and had made the effort to come meet me.

Meeting people who follow my blog and meeting friends from around the world is the best part of being here.

I’d say the highlight of my day was being interviewed by Parkinson’s vlogger Barrie Cleveland. 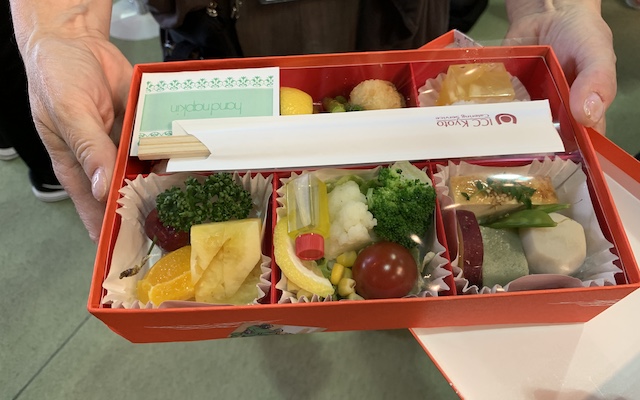 Sharon Krischer shares a photo of her lunch at the World Parkinson Congress 2019.

Today started early. Ronnie Todaro from Parkinson’s Foundation was presenting at eight in the morning. Her presentation, ‘A closer look at the unmet needs, research and care priorities for women with Parkinson’s’, was about the Women and PD study that I have been a co-chair of for the last two years. Ronnie gave me a shout-out at her presentation and it was the highlight of my day!

We spent time with friends until noon and then attended ‘Living well with Parkinson’s disease: what’s your secret?’. Some of the speakers were very good but some were difficult to understand, and I didn’t feel like they addressed the question. What was interesting is that there were two screens set up, with one showing the slides in English and the other in Japanese.

I spent some time in the exhibition hall meeting different people and ended the day at a Rock Steady Boxing session which included taiko drumming! It was so much fun.

Friday morning began with a talk from blogger Heather Kennedy discussing creative ways to overcome our challenges. She did not disappoint, and her presentation was very creative. I then went to a Parkinson’s Disease Movement Lab which was terrific.

Later, my husband and I went to a showing of the film ‘Kinetics’ by Sue Wylie. Then we went to eat our bento box lunches for the day, but unfortunately there was a catering glitch and the kitchen ran out of food!

After scrambling to find something to eat, I missed most of the talk by Nobel Prize winner Shinya Yamanaka on ‘Current status of iPS cells and efforts for medical application’. I will have to watch the video later.

The final session of the conference was a roundtable discussion on ‘Staying positive and engaged after a Parkinson’s diagnosis, advice from PwP and care partner’. I attended it because one of my Parky friends was leading the discussion. Most of the participants were Japanese and there was an interpreter at the session translating. I think everyone got something out of the session. I had to leave a few minutes early to catch a train to Tokyo.

I missed some very good sessions throughout the three days for various reasons so I will be sure to catch up on what’s available on YouTube. 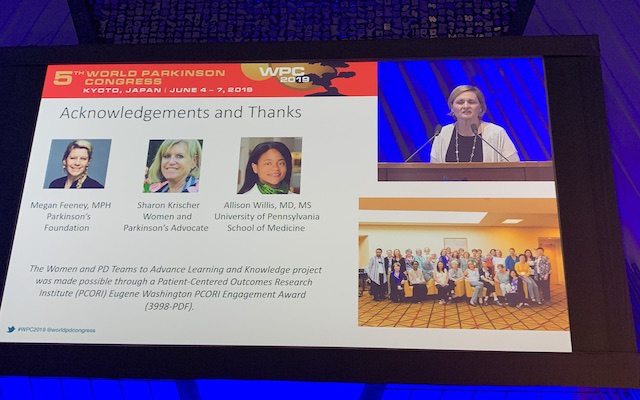 Sharon got a shout-out from Parkinson’s Foundation’s Ronnie Todaro for her work with a study on women and Parkinson’s.

How one girl has coped with Parkinson's since she was 10