Some people in the audience got very emotional and passionate about the fact that Parkinson’s still does not get as much funding, and attention, as conditions such as cancer and Alzheimer’s. 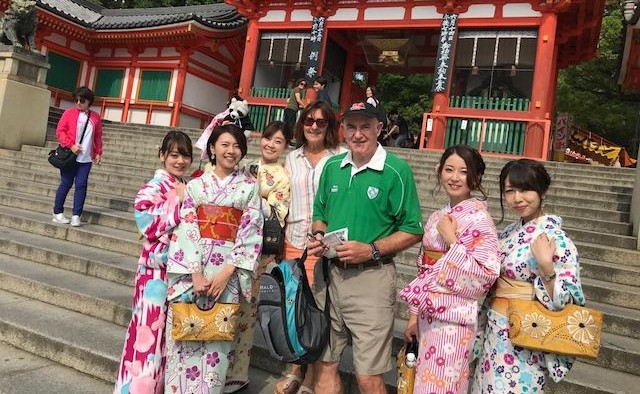 In the first in our new World Parkinson Congress series, we share the diary of Parkinson’s blogger Joe Lacy who attended the event in Kyoto, Japan.

Joe reflects on an action-packed week which saw him try out exciting wearable technology products, rub shoulders with fellow campaigners and enjoy a performance from geishas

As a World Parkinson Congress blogger, this evening I was invited to attend a reception at the historic Heian-Jingu Shrine in Sakyō-ku.

It was a beautiful venue and we were lucky enough to watch a performance by the Geisha, taste Japanese culinary delights and experience authentic culture.

It was also a great chance for patients and caregivers to rub shoulders with doctors, researchers and charities. I think in any other industry there is a clear divide between customer and supplier –but it doesn’t necessarily feel like that in the Parkinson’s community. What these people work on and where they put their money will decide how soon a cure is found. I’m wondering how I can help their process this week.

I have also received an email asking for volunteers to wear a new monitoring device for three days during the conference. I’ve jumped at the chance, it will track my symptoms and let me know when my medication needs to be adjusted. If it works it could be incredibly useful when having a consultation with a doctor.

I can’t wait for the conference to start on Tuesday.

I decided to go to a lecture on research activism today, which provided a lot of information on what’s being worked on in the Parkinson’s community. This led to a rather heated discussion around the disease. Some people in the audience got very emotional and passionate about the fact that Parkinson’s still does not get as much funding, and attention, as conditions such as cancer and Alzheimer’s. They emphasised that though we may say we are ‘fine’, in reality we are dying, and suggest we ‘change the message’ around Parkinson’s for the good of the community.

Today I tried out a session on alpha-synuclein – the sticky protein which plays a major role in the brains of people with Parkinson’s – before attending a lecture on diet and Parkinson’s. I had to try to not get too wrapped up in thinking about what caused my Parkinson’s or how I could have avoided it. Instead, I tried to focus on learning how to slow the progression.

A presentation slide on the best food and diet regime for people with Parkinson’s was particularly helpful and it was encouraging to hear that I’m taking the right supplements: fish oil, coenzyme Q10 and turmeric. I am still working on cutting back on the ice cream however! 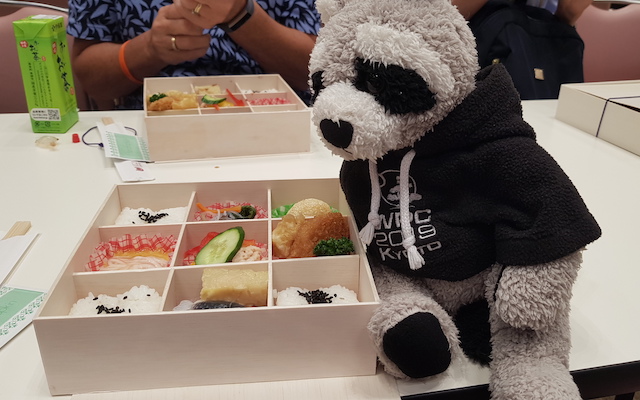 Joe Lacy snaps a picture of his healthy lunch at the World Parkinson Congress.

One thing that is wonderful about the World Parkinson Congress is that you see individuals recognised for their contributions to the Parkinson’s community. Campaigner Sara Lew was presented with an award for her dedication to supporting the Malaysian Parkinson’s Disease Association. I’ve seen Sara in action and I can’t think of a more worthy recipient.

Today’s lectures got a bit technical for me, so I used it as a chance to mingle and browse all the posters and information leaflets. I found it truly encouraging to see just how much research is being carried out all over the world. I overheard a fellow Irish accent, followed it and met and got to know a young onset Parkinson’s group from Ireland. I was so impressed with how they are managing to juggle work, kids and this terrible disease all at the same time.

In the afternoon I went to a lecture about falls. I learnt that I need to do more core training to help my balance, and that I need to get back into my tai chi if I want to prevent future falls!

I then attended one further lecture on how my drugs affect blood pressure. By the end of that, I was completely drained so headed back to my Airbnb, grabbed some food from the supermarket washed it down with some wine. I should add we’re being given a healthy packed lunch every morning, which all the ‘Parkies’ are loving!

My wife Pauline and I went into Kyoto early to do a bit of sightseeing before making it to a session on peripheral problems of Parkinson’s. Subjects that are often overlooked, like constipation, urinary dysfunction and sexual dysfunction were addressed. It was brilliant to be presented with some solid solutions and to talk about these topics. It is fair to say that jet lag had really start to kick in by this point.

At the next talk, the hall was packed to hear 2012 Nobel Prize winner Shinya Yamanaka discuss about the current status of induced pluripotent stem cells (iPS). It’s always great to hear an expert talk, as they make the most complicated subjects understandable.

I then had to rush to make the talk about the device I was wearing and see my results from the last three days. It seemed I wasn’t wearing it long enough for it to pick up any major results! I have noticed a lot of discussion around wearable devices during my time at the WPC.

Finally, I went to a lecture with neurology professor Bas Bloem from the Netherlands. He was very charismatic and passionate about treating Parkinson’s. He explained what ‘ParkinsonNet’ is, and all I can say is, if you have to get Parkinson’s, then the Netherlands seems like a good place to get it! It sounds like they have loads of support in place.

I had a real wish to go out exploring and celebrating on the final evening, but the intensity of the last few days took its toll and we decided to have an early night.

Pauline and I decided not to rush off after the conference, meaning I’ve woken up and had time to reflect on what we’ve been taught, and where we can go from here.

I am sad to have missed so many topics, and to not have asked some burning questions like why my tremor increases when I yawn. Or if dairy is okay for Parkinson’s. Despite there being two of us attending all of the talks, we struggled to get all of the answers we needed in the short time.

One thing I have taken away from the conference is that I need to educate myself on the current status of clinical trials, and find out if there is one that I can participate in. I’m generally going to try and pay better attention to the studies around Parkinson’s. 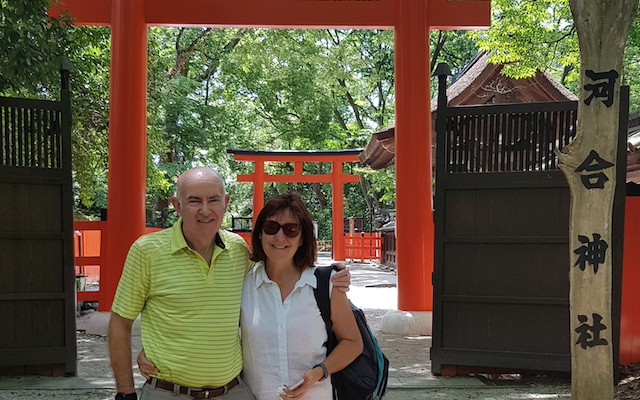 Joe Lacy (left) with his with Pauline (right) in Kyoto, Japan.

World Parkinson Congress: all about the sushi

Some people in the audience got very emotional and passionate about the fact that Parkinson’s still does not get as much funding, and attention, as conditions such as cancer and Alzheimer’s.