When you see me, I’m going to have a gold chain and be with some fly ladies, making beats and rapping – and you’re not even going to think about Parkinson’s. People are going to be like: “Man, that dude is dope" 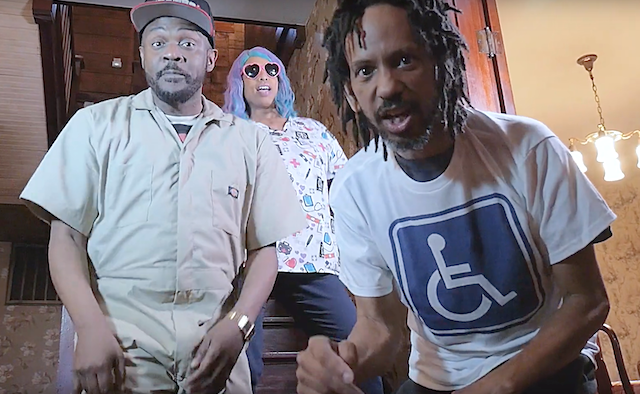 We hear from Walter J Archey III (right), the US filmmaker and rapper with Parkinson’s who’s on a mission to be known as “the liveliest dude with Parkinson’s in the world”. Walter, who raps under the name Tahiti, tells us about his latest single ‘Light Blue Room’, why he takes inspiration from Stephen Hawking – and the difficulties associated with being an African American with Parkinson’s

Hi Walter, thanks for taking the time to chat to us here at Parkinson’s Life. Can you tell us a little bit about yourself and your music?

I’m a 51-year-old Aquarius who lives in Oklahoma, US. My dad was in the military air force, so I moved around a lot and have lived in a lot of different states.

I’ve been rapping since 1980. My dad was stationed in Rapid City, South Dakota, US, at the time and the school I went to was predominantly white. This white kid at the table started rapping lyrics and I’d never heard it before. It was ‘Rapper’s Delight’ by The Sugarhill Gang. A friend’s sister put it on a cassette for me and I just played it over and over again, until finally I was motivated to write my own raps.

How did you feel when you were diagnosed with Parkinson’s?

I was officially diagnosed in 2015 but there were signs of it before that. Friends and family would ask me: “Dude, why are you moving so slow?”. Anybody who knows me knows that I’m very active – so they knew something was wrong.

I didn’t know anything about Parkinson’s other than the effects it had had on Muhammad Ali and Michael J Fox. At first, I was in denial about it, I didn’t even want to talk about it. When I told my kids – who are aged 22 and 16 – the first thing they did was Google it to find out more about the condition.

I’ve got a lot on at the moment.  My girlfriend has unfortunately had two strokes, so I have double duties: I have to deal with my own issue and deal with hers too.

On World Parkinson Day, you released a music video for your single ‘Light Blue Room’. What’s the song about?

In the US, the disabled sign is a blue square with a person sitting in a wheelchair – and I felt like that was me. When I first moved to Oklahoma two years ago, it was kind of a shock because I was living in a metropolitan area before that. It felt like going back in time to 1991 and I really couldn’t do a lot or get out the house much because of my girlfriend’s condition. I felt trapped inside a light blue room, but thankfully I don’t feel like that now.

You have to be light-hearted about Parkinson’s. You can’t let it get you down, because if you do, you’ll be trapped in that light blue room.

My favourite line in the song is “I’m dope nah mean but, I got no dopamine.”

What changed your perspective about Parkinson’s?

I didn’t want to feel sorry for myself. I just wanted to be the liveliest dude with Parkinson’s in the world.

When you look at Stephen Hawking, he was in a chair and couldn’t move but he had appearances on shows and movies like Star Trek. Nobody focused on his illness, they just thought he was a smart dude. He never let it hold him back. I’m trying to be the Stephen Hawking of Parkinson’s.

When you see me, I’m going to have a gold chain and be with some fly ladies, making beats and rapping – and you’re not even going to think about Parkinson’s. People are going to be like: “Man, that dude is dope”.

What did you enjoy most about creating the music video for ‘Light Blue Room’?

I got to hang out with my friends and do something creative and we all had a really good time. My friend Robi Nickoli plays the nurse in the video and Marcellus Suber co-directed the video with me.

My buddy Pikahsso sings the hook on the song, he and I were in a rap group together called PPT which lasted around four years. Our claim to fame was winning the Dallas Mavericks contest (organised by the US basketball team) to come up with an official play-off song and we were signed to Idol Records. We never made it to a national level, but I think we were on our way.

You’ve previously written, produced and directed films and TV shows. How did you get into filmmaking?

When I was in high school, my dad rented the movie ‘She’s Gotta Have It’ by Spike Lee and I watched it and it blew my mind. It was such a cool, cutting-edge movie shot in black and white and I knew it was what I wanted to do.

I studied video and film production at university, but my career never really took off the way I wanted it to. I’m currently co-writing two screenplays. One is about working in a call centre and the other is a science fiction script about a drug dealer who gets his drugs from an alien. 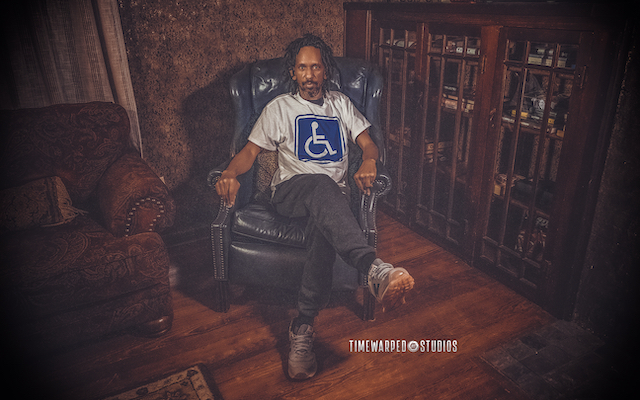 How difficult is rapping with Parkinson’s?

Rapping out loud can really help your vocal chords when you have Parkinson’s, but I can’t rap the way I used to because I run out of breath. You need good breath control to be a great MC. My intent was to put out an album or EP but I was having so much difficulty rapping that I just did one song for the moment.

The fact that I’m a younger-looking African American person with Parkinson’s has been a challenge in itself. The first thing that a lot of people think when they see you is: “Man, this dude is clearly on drugs”. I get a lot of weird looks, and I don’t blame them. If it was the other way around, I’d probably do the same thing. It’s just something you have to deal with.

I remember being in a convenience store and saw a lady wearing a black filmmakers T-shirt. I asked her if she was a filmmaker and she said: “The question you need to be asking is why are you shaking so much?”. Some people are just raw like that.

There needs to be more awareness that people have problems other than the ones you make up in your mind.

Do you think Parkinson’s gets enough awareness in comparison to other conditions?

Yeah, I think it does. You don’t have lifestyle magazines for conditions like sickle cell disease, for example. We have World Parkinson’s Day, marches, all kinds of things. I think everybody’s doing a good job and Parkinson’s community has got some superstars in it.

When you see me, I’m going to have a gold chain and be with some fly ladies, making beats and rapping – and you’re not even going to think about Parkinson’s. People are going to be like: “Man, that dude is dope"