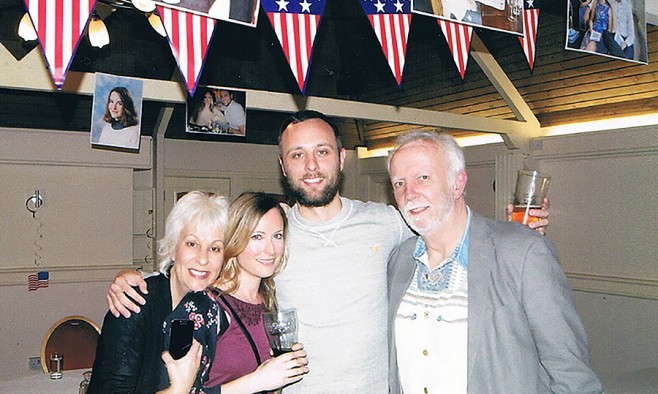 Parkinson’s robbed Pete Vanderburg of his health, his career, his home, and even his friends. His wife Lisa and their two sons helped him through the darkest times – and now, some 15 years after his diagnosis, DBS has given him a new lease of life

It all started in the year 2000, about eight years after Lisa and Pete Vanderburg and their two sons moved from the UK to the United States. At first the symptoms were barely noticeable. Pete only had little tremors in his right hand, but over a year they became more pronounced. He saw a range of doctors, including four neurologists, yet for a long time there was no clear diagnosis. At one point, one of the neurologists even assured Pete: “You definitely do not have Parkinson’s.” However, as the Vanderburgs were to discover soon after, this confidently optimistic assessment would turn out to be wrong.

Like many people with Parkinson’s, Pete remembers his early experiences of the diagnosis process as a tumultuous time. “There was so much confusion. Back then, I still hoped that the tremor resulted from a problem I had with my shoulder.” Countless doctors’ appointments followed that same year, until the diagnosis became certain. “The doctor told me, ‘I have good news and bad news for you. The bad news is you definitely have Parkinson’s disease. The good news is it is tremor-based.’ To be honest, as we already suspected this, it was scary, but at the same time something of a relief.”

His wife, Lisa adds, “Of course, it was a terrifying diagnosis. However, at least we had an enemy to fight against. The first thing we did was search for information online.

“The advice was scattered, overwhelming and often contradictory. So we thought we might try alternative treatments before taking the drugs. However, newly diagnosed patients are just easy prey for the charlatans – we know – we did it; it cost us a fortune. Pete did join a couple of clinical trials as well, but to no avail.”

Then Lisa, too fell sick (with a non-Parkinson’s related illness).  Pete recalls: “We were 51 and 44; both of us had to give up our jobs in the same year, while enormous treatment bills were piling up, so you can imagine the consequences. One moment, we were running our own restaurant, we were an independent, thriving family full of energy, and the next minute things were never the same again.”

Having lost their jobs, Pete and Lisa lost their health insurance, then their house. Lisa continues: “Once the two breadwinners are culled, insurance is lost through the upping of premiums. Of course we still had our family. It was devastating for our boys, though. They were 18 and 19 and still in college at the time, but never left home – they wanted to be there for us, despite the awfulness.”

Fear of the unknown

Pete and Lisa decided to return to the UK in 2008 while the boys stayed in the US. Pete’s Parkinson’s symptoms deteriorated very quickly which was hard for the family, too. “Above all, I did not want the boys to see me like that.” In fact, Pete didn’t want anyone to see him like that and so they lost their social life as well.

A little while later, the boys came over to the UK, stayed with them in their little flat, and worked with Pete on his investment fund to start a new professional life.

Lisa says: “We did not want any help at first, but we saw quickly how much better things are when we stay close as a family in these tough times. We are still very thankful for what they did, but those two years the boys were here with us, Pete was deteriorating fast. The sadness, helplessness and pain; our sons tried hard to hide the effect it had on them, but it broke my heart.”

In 2012, Pete’s neurologist explained that his dose of medication could not be increased anymore to control the symptoms. In any case, the drug doses were making life intolerable. That’s when the neurologist mentioned deep brain stimulation (DBS) as a way to treat Parkinson’s symptoms. “We immediately searched for DBS on the internet to find out all about it. But, when I realised that this meant I had to undergo brain surgery I was frightened as hell,” Pete says. “He did not like the words ‘deep’ and ‘brain’ put in the same sentence,” adds Lisa.

Light at the end of the tunnel

“Although we were worried about what might go wrong, the boys and I realised that DBS might be our only chance to get the old Pete back,” Lisa describes her memories. “Pete often talks about how bad his tremors were, but we remember so much more. In the end, he needed a helping hand for all kinds of daily chores and he isolated himself, because nobody should see his misery.”

Pete gained more trust in the procedure when he learned about a DBS device using the latest technology and that a renowned expert would conduct the surgery. This changed everything. “Knowing I would get a high quality device with a long battery life, one of the best surgeons to do the procedure, plus being under general anaesthesia, changed everything for me. And the prospects of seeing light at the end of the tunnel made me happy.”

Back to the old Pete

The surgery went well, but the moment of truth came two weeks later. “When the DBS device was programmed and switched on, my tremor disappeared within seconds,” Pete says. Lisa adds, “I had seen this little muscle in his arm shaking every day and suddenly it just stopped after firing away all these years. Then I realised that I would get my old Pete back. And very soon, he could do the most normal things, like playing cards, again. We could even reduce the dose of Pete’s medication by half!”

Asked if there is anything he would do differently, Pete says: “The only thing I would do differently is to get a deep brain stimulation device earlier. I love my Vercise – it has made such a difference in my life. Today, my life is worth living again and words cannot express how grateful and happy I am about that and my whole family is too.”

This article was sponsored by Boston Scientific. The information in this article is given for information purposes only and does not represent an endorsement by Parkinson’s Europe of any particular treatments, products or companies. This article is not a substitute for advice from your doctor, pharmacist or other healthcare professional. Parkinson’s Life makes no representations or warranties of any kind, express or implied, about the completeness or accuracy of information provided.

Leslie Davidson discusses her and her husband’s simultaneous diagnoses