The cliché is that a picture is worth 1000 words. We hope that this new image of Parkinson’s will spark a dialogue and precipitate change 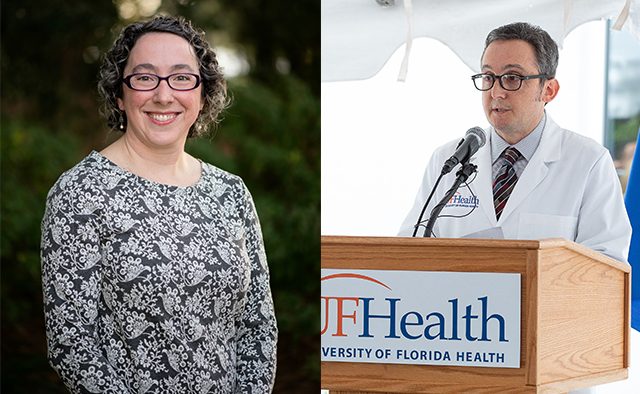 Today, Parkinson’s disease is the fastest growing neurological condition in the world, affecting millions of people – but did you know that many medical publications and teaching slides still use a sketch made in 1886 to depict it?

In an article published in the journal JAMA Neurology, Dr Melissa J Armstrong (pictured left) and Dr Michael S Okun (right) argue that it is ‘Time for a new image of Parkinson’s disease’ that more accurately reflects the varied experiences of the people with the condition.

“Sir William Richard Gowers’ 1886 Parkinson’s disease sketch shows an older gentleman who appears somewhat frail and hunched,” says Armstrong, associate professor in neurology at the University of Florida Health Norman Fixel Institute for Neurological Diseases, US, and director of the Mangurian Clinical-Research Center for Lewy Body and Parkinson’s Disease Dementia, US. She explains the motivation behind the article: “This picture is still accurate for some people with Parkinson’s disease. But it doesn’t show that Parkinson disease can have milder symptoms or that Parkinson’s disease occurs in people of different genders, ages and backgrounds. There are also different types of Parkinson disease, with some different symptoms and different speeds of progression.”

The effects of treatments that have emerged since the 19th century are also not reflected in the sketch, adds Okun, a professor and executive director of the Norman Fixel Institute for Neurological Diseases. “The classical image lacks changes that manifest on and off dopaminergic medications and deep brain stimulation. It is forgivable as this image was sketched nearly 100 years prior to the introduction of these therapies.”

The impact of images

Images depicting the condition can have a significant impact on the experiences of diagnosis and healthcare of people with Parkinson’s. In their article, Armstrong and Okun highlight that “medical textbooks continue to have biases relating to age, sex, and race/ethnicity. These biases result in inadequate and unrealistic information”. The biases and stereotypes could even lead to misdiagnosis.

Gowers’ illustration also shows someone with severe Parkinson’s disease symptoms – something both authors were keen to counter. “The biggest myth is that you cannot have a happy and meaningful life with a chronic disease like Parkinson’s,” said Okun, who wrote the book ‘Parkinson’s Treatment: 10 Secrets to a Happier Life’ to support people with the condition.

“A picture is worth a thousand words”

To offer a broader and more accurate view of Parkinson’s, Okun and Armstrong included three new images in their article, created by illustrator Erica Rodriguez. Each of the images features a different person and represents a different type or stage of the condition.

Okun hopes that the images will encourage discussion about how Parkinson’s is represented: “The cliché is that a picture is worth a thousand words. We hope that this new image of Parkinson’s will spark a dialogue and precipitate change.”

The cliché is that a picture is worth 1000 words. We hope that this new image of Parkinson’s will spark a dialogue and precipitate change

Debate: are people with Parkinson’s “sick”? (Part One)

The first in a two-part series