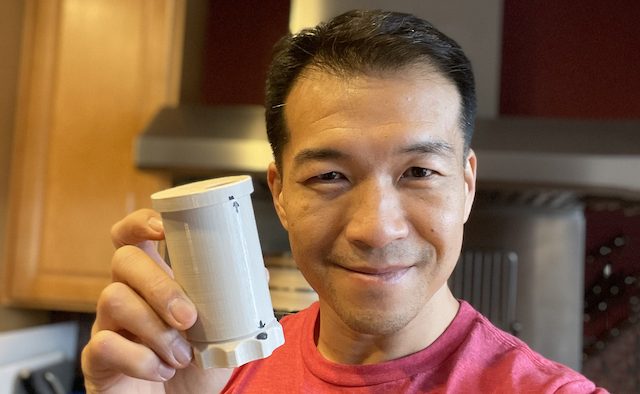 When Parkinson’s campaigner Jimmy Choi shared a TikTok video of his difficulty taking medication from a bottle, he inspired the online community to develop a new design – and help solve “an everyday struggle” for people living with Parkinson’s disease

When US-based athlete Jimmy Choi posted a video to social media platform TikTok, showing his daily struggle with taking Parkinson’s medication from a bottle, he wrote: “Hey pharma companies – get a clue!”

Jimmy, who was diagnosed with Parkinson’s disease at age 27, uses social media to share athletic feats – and took part in US TV show ‘American Ninja Warrior’, which tests the physical bounds of its contestants through vast obstacle courses.

But this time, he told Parkinson’s Life, “I wanted to share that it’s not all about fitness triumphs in my world. People see 60-second clips of my day but don’t get to see the struggle that is at least 40% of my entire day.”

Speaking to Carol Off, host of Canadian radio show ‘As It Happens’, Jimmy said: “There is a struggle, an everyday struggle, that is real – things like getting a pill out of a pill bottle or tying my shoes or buttoning my shirt.”

To his astonishment, Jimmy’s TikTok video gained thousands of likes, sparking the platform’s users to work together and create a better pill bottle design for people with Parkinson’s disease.

“It is truly amazing to see how the community then jumped in,” Jimmy said. “Folks that have no connection to Parkinson’s decided, ‘Hey, you know what? I have an idea’. And then other folks jumped in to say, ‘Hey, I love your idea. I can help you with that’.”

A “simple yet effective” solution

Jimmy’s TikTok caught the attention of US videographer Brian Alldridge, who created a design that would allow users to swallow a single pill, isolated by the rotation of a knob, straight from the bottle.

Without a 3D printer to test his design, Brian himself reached out to TikTok users for help – and within days, a 3D-printed prototype of the pill bottle was on its way to Jimmy, thanks to US engineer David Exler.

Jimmy said he found great value in the “simple yet effective” design. “The bottle [is] easy to grab even for hands that have dexterity issues,” he told Parkinson’s Life. “It isolates a single pill at a time, making delivery to mouth as simple as taking a shot. No more handling and dropping of pills.”

Jimmy added: “It not only saves time but especially anxiety about people staring in public as we try to isolate a single pill. Stress is an agitator for Parkinson’s, and this removes stress from taking pills in a crunch in public.”

Incorporating Jimmy’s feedback on each prototype, David continued to streamline the pill bottle design; Brian, meanwhile, has kept his design open source to allow anyone to improve upon it. Now on version eight of the design, the pill bottle has been downloaded and 3D-printed by people all over the world.

Reflecting on the overwhelming response to his video, Jimmy said: “I was definitely surprised by two things. First, the support and call to action from people with different ideas – especially Brian, who is not an engineer but wanted to share an idea that then took off. And second, how little people know about Parkinson’s. The stigma is real.”

A version of this article was first published in January 2021.