The most important improvement is in my ability to think, analyse and articulate better. I couldn’t hold a good conversation a year ago, but now I can 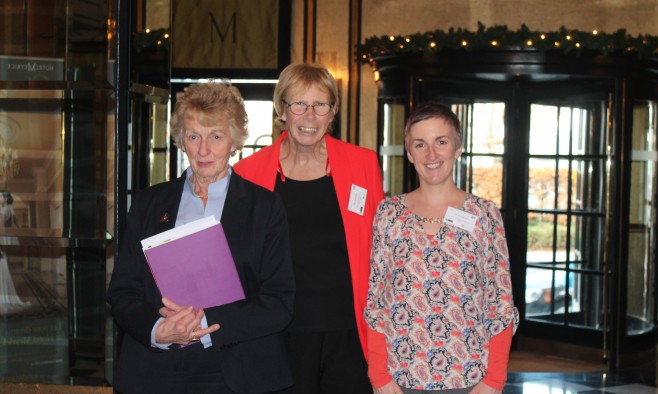 At a time when trial subjects are in short supply, people like Sheila Roy (pictured above, centre) ensure Parkinson’s community benefits from the experimental research. One of the first people in the world to test ProSavin, she has written the following account four years into her trial – recounting the highs, the lows and ultimately the “life-changing” improvement to her quality of life

I was diagnosed with Parkinson’s in 1995 and have lived with this life affecting condition for 20 years, one third of my life. This disease has challenged my ability to function in every possible way. I lost confidence, dignity and hope. For the first 18 years I experienced mobility problems, falls, constant pain, sleep deprivation, screaming nightmares, dyskinesia, ‘freezing’, and in my case, spontaneous closure of my vocal cords and being unable to breath.

I was spiralling downwards with little hope. My day was so unpredictable. The transition from extreme involuntary movements to completely frozen took four seconds, which meant that I was unable to get into a safe position. Often the freezing would last for up to two and half hours, and took some time to return to moving around again.

At this time I spent about 60% of each day ‘off’ which meant that I spent long periods sitting and waiting until I came back ‘on’ again. Only 20% of my day was ‘on’ but this was blighted by involuntary movement making it hard to do anything. It led to a withdrawal from society and I was exhausted by the constant movement. My sleeping was erratic and I would frequently wake my husband up with screaming nightmares.

All of these symptoms changed me into a person that I no longer recognised. In 2010, when I was thinking that things could not get any worse, they did just that. One night the house caught fire and my husband became very ill while my horse and cat died in the damage. Inevitably, my PD worsened. My daily medication regime at that time – consisting of around 20 different daily doses of various tablets – was becoming less effective and my response was to increase the dose, which made the symptoms even worse.

In February 2011 Dr Roger Barker referred me to Dr Philip Buttery, a colleague of his at Addenbrooke’s Hospital, to consider my suitability for deep brain stimulation. During this consultation he told me about the ProSavin study for the first time. Dr Buttery said that they were looking for three people to take part in assessing the safety, efficacy and dose evaluation of ProSavin in people with mid-stage Parkinson’s, who were experiencing reduced benefit on levodopa medication – I was the ideal candidate. The study evaluated three dose levels in a total of 15 patients with PD. Six people received the higher dose, and I was the first of these in the UK.

ProSavin delivers the genes for three enzymes that are required to make dopamine. This is injected deep into the brain in order to convert cells into a dopamine factory replacing the lost source of this neurotransmitter.

As soon as I heard about the study on ProSavin I knew it was for me. I felt very confident that, if possible, I should go for it. Many people tried to persuade me otherwise, but I felt strongly that it was right for me.

It has not been an easy process. I have to watch my body for involuntary movement, and reduce my intake of oral dopamine. This has been hard to do, and gets harder the more I reduce the intake. My improvement is not a gradual incline but feels like a step up in response to dyskinetic movements and a reduction in my medication. It has taken me two years to half my dosage of Stalevo tablets from ten to five.

I am not cured, but I now have a little factory in my brain that produces dopamine. I still have involuntary movements and ‘off/on’ times, but they are not as severe as they were. Now I know when they are coming, and can at least function when ‘off’.

The most important improvement is in my ability to think, analyse and articulate better. I couldn’t hold a good conversation a year ago, but now I can. I can also express myself in ways I couldn’t before such as writing, which I love, and laughing. My mobility is much improved too as well as my sleeping pattern. I used to only get about three hours sleep in 24 hours – now I’m getting around seven which has made a tremendous difference allowing my body to heal. I still get terrible nightmares where I scream the house down – nothing seems to make that any better.

I have an increased ‘on’ period – the time when I’m fully functional. I’ve gone from four hours to 11 hours a day – so most of my day is active and it makes such a difference. I just have more time to enjoy myself and do the things I want to do. There’s less falling asleep all the time and my mood has really picked up meaning I’m much more sociable. Overall, I’m much more confident than I was. It’s a big change.

Since starting this study I feel like I’ve improved significantly and I’m really encouraged by that. It means that there is hope for turning this condition around.

Would I do it again? Yes, I’d do it again tomorrow! Because for me it’s been a life-changing improvement.

If you would like to get involved with a trial and help find a cure, visit Fox Trial Finder

The most important improvement is in my ability to think, analyse and articulate better. I couldn’t hold a good conversation a year ago, but now I can