There is a joy in the actual physical going to work, to think this hasn’t got me, it hasn’t beaten me yet 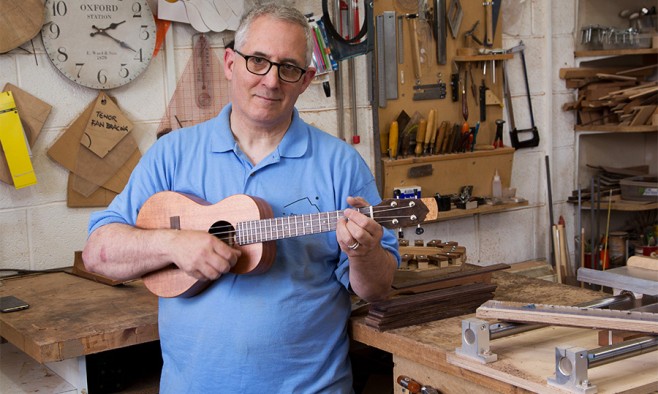 Having been recently diagnosed with Parkinson’s and turning down treatment in the US, luthier Pete Howlett focused all attention on his quest to reach his life goal of completing 1,000 instruments – what he considers a “lifetime’s work” – and he’s adamant the disease won’t stop him

Plying his craft in a small corner of Wales, master ukulele maker Pete Howlett receives orders for his instruments from destinations as far flung as Australia, Japan and Hawaii – where ukuleles first originated. He had hoped to retire 10 years from now. Then one day his retirement plans – and his childhood dream to complete 1,000 ukuleles – were suddenly thrown into jeopardy.

Like many people who are diagnosed, Pete didn’t suspect Parkinson’s at first. “Symptoms had been there for a year before, but I have a trapped nerve in my neck, so I thought it was that. My osteopath still insisted that I go and see a specialist, and that was when I was diagnosed [in May 2015].

“The most difficult part now is finishing off the instruments, the really delicate final processes, which are affected the most by the stiffness and loss of mobility. A lot of my job is done by feel, so losing that sense of what’s happening is hard,” Pete explains. 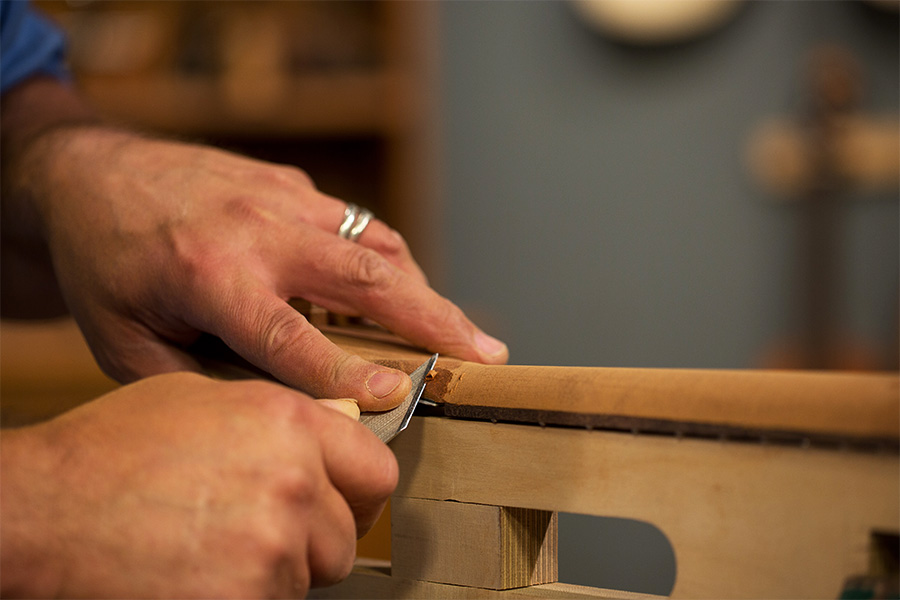 In fact, one of the biggest challenges he now faces is being able to create each instrument’s unique signature – like many people with Parkinson’s, Pete has found his handwriting is deteriorating due to the loss of fine motor control. “I sign all my instruments by hand, but now I can’t control that back and forth movement in the same way I did before, which is causing an issue.

“I can’t play tunes like I used to. One of the things I used to do after completing an instrument was film myself playing a demonstration on YouTube. The ability to sit down and play from something you’ve created – there’s nothing equal to it.”

While he is getting to grips with the physical limitations, the mental struggle is another battle in its own right. “The agony is not knowing how the condition will develop. Obviously Parkinson’s manifests itself differently for everyone and, for now, the progression isn’t bad enough to stop me from building altogether. But in a few weeks’ time it might accelerate and start to impact considerably more. Those sorts of things prey on anyone’s mind. It’s good being positive and upbeat, but you have be realistic too.” 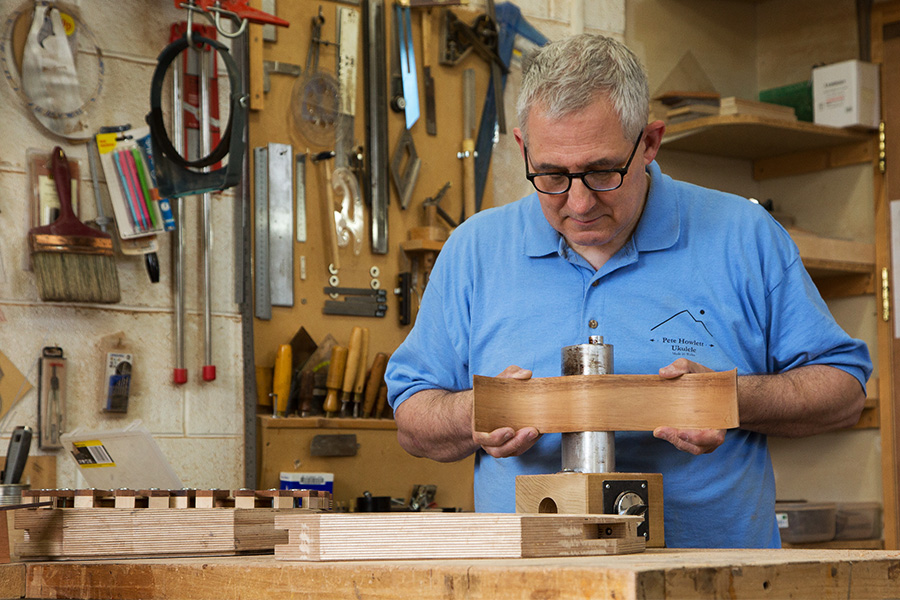 Pete, who is 60, had decided on his life’s target of making 1,000 instruments long before his diagnosis – he’d passed the 687 mark when Parkinson’s Life caught up with him.

“When I was 15 years old I read a story about a lute maker in Germany during the 17th century. Unfortunately for him, he was building the instruments when they were going out of fashion. After he died, his workshop was opened to reveal 1,000 instruments in various stages of completion, which never saw the light of day. That was when I decided the figure represented a lifetime’s work.” Hence, his childhood dream was born.

Ironically, Pete is faced with the prospect of being forced to slow down production at a time when the ukulele is undergoing a renaissance in popularity. But he remains determined to reach his target, yet also pragmatic about the situation and he has been forced to plan ahead. Tommy Ziegenspeck is a fellow craftsman who over the next year will help Pete reach his 1,000th ukulele. A single instrument can take between eight and 40 hours to make. 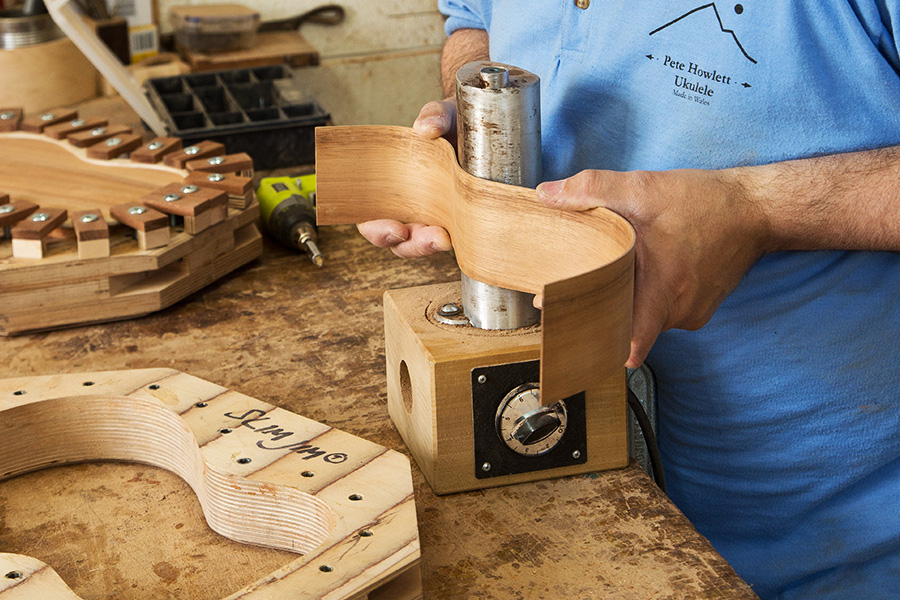 “I have a sponsor who offered to pay for treatment in America, but I refused because of the amount of travelling. ‘How about paying for a luthier for a year?’ I asked. He accepted – and that’s how I was able to bring Tommy in to help me. He and I work really well together, so it suits him too,” Pete says. “He is a superb builder, who’s been my apprentice before he qualified, and my aim is to move from making to teaching. I want to become a mentor.”

“I have a sponsor who offered to pay for treatment in America, but I refused”

That wasn’t always the plan, however. Before Parkinson’s came along, Pete had allowed himself until he was 70 to reach his target. The aim was then to retire and build for fun. But he would rather prepare for the worst than risk missing his target. “The forward planning isn’t about being in a panic, but the sensible thing to do,” he assures. “I don’t want it to be three or four years down the line and then Parkinson’s gets considerably worse.”

Pete’s outlook on life complements his forward planning. “It’s miserable having this thing, but it does have upsides to it. It refocuses you and lets you prioritise things in life. You can have definite goals and make life more meaningful. There is a joy in the actual physical going to work, to think this hasn’t got me, it hasn’t beaten me yet. I can still go to work and have that dignity.” 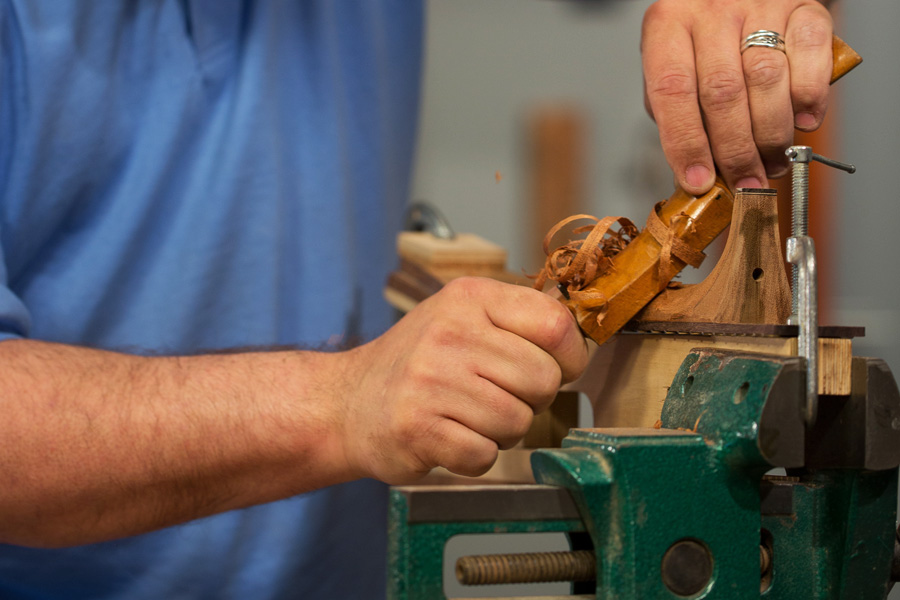 Having crafted so many instruments, does he have a favourite? “I get just as much of a kick out of each one. My view is I’ve reached the point where my ukuleles are good enough that I can’t make a better sounding or better looking instrument. It is my speciality. If you’re an artist or craftsman you have to be sure about what you’re doing. I’ve done enough of it to know that what I’m doing is right!”

For all the uncertainty surrounding the progression of Parkinson’s, he is defiantly confident when it comes to the importance of reaching his target. “I’ve got to do it,” he swears without hesitation. “There’s no way it’s not going to get done, the plans are already set. There will be 1,000 instruments. It’s a proud thing for me to say that there will be 1,000 instruments in three years. I’ll have made my mark.”

Each and every ukulele will no doubt carry the unique legacy of his signature etched into its body, yet the mention of one word in particular makes him pause and reflect for a moment.

“Legacy,” he repeats back. “That would be the very word to use.”

For browse Pete’s instruments and to get in touch with him, visit his website

There is a joy in the actual physical going to work, to think this hasn’t got me, it hasn’t beaten me yet