We haven’t conquered Parkinson’s, but we conquered the fear of Parkinson's 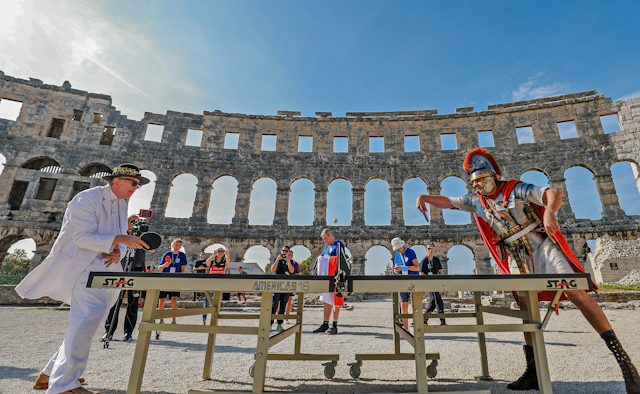 Rock musician Nenad Bach (pictured above, left) says that ping pong not only helped improved his Parkinson’s symptoms, but inspired him to help set up a non-profit dedicated to the sport

When Croatian-American Nenad Bach was diagnosed with Parkinson’s in 2010, at the age of 56, his symptoms began to impact his ability to play the guitar.

Six years after his diagnosis, a friend invited him over for a game of ping pong in New York, US, his home city. Nenad never would have imagined that the sport would help him to manage his symptoms, reignite his passion for music – and inspire him to help launch a non-profit dedicated to ping pong.

The musician and peace advocate, whose rock albums include ‘A Thousand Years of Peace’, helped to set up PingPongParkinson in 2017. With backing from supporters around the world – including Will Shortz, vice president of PingPongParkinson and owner of the Westchester Table Tennis Center – the organisation aims to create a sports movement that benefits the Parkinson’s community.

“Without ping pong, I wouldn’t play the guitar anymore. It gave me the chance to write a song about Parkinson’s and about the sport that brought me back to music,” says Nenad. To demonstrate, he picks up his guitar for an impromptu performance. His latest release is “We Call it Ping Pong Parkinson”, which is available for listening on Spotify and will be featured on his upcoming seventh album.

Inspired by Nenad’s positive experience with the sport, PingPongParkinson was designed to help people with Parkinson’s improve their quality of life by practising ping pong.

The non-profit offers a programme developed alongside advisory board member Dr Art Dubow. Each week, classes feature a range of weekly exercises including breathing practice and ping pong training.

But, why did the non-profit organise a tournament?

Nenad – whose musical achievements include being featured on the 1995 album ‘Pavarotti and Friends Together for the Children of Bosnia’, created to raise humanitarian support during the Yugoslav Wars – believes that hosting the tournament in this historic Roman amphitheatre sent a peaceful message.

“It’s a full circle of humanity,” he says. “The same place where people fought for entertainment of others, now fighting against this diagnosis as a non-contact sport – except hugs after the game.”

Now, he explains that PingPongParkinson aims to change perceptions about the condition by helping to get Parkinson’s recognised within the world of paralympic sports. In doing so, Nenad hopes to help create a community to bring people together.

‘We must prepare our brain and body to face all difficulties’

We haven’t conquered Parkinson’s, but we conquered the fear of Parkinson's

“The power of creating something cannot be overstated”