There is a serious lack of support for those of us living with Parkinson's in this country. We deserve better

The campaign calling for “proper” Parkinson’s disease care in Ireland 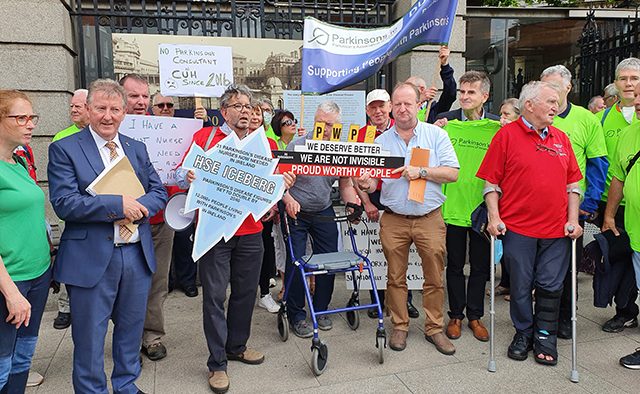 Approximately 12,000 people are currently living with Parkinson’s in Ireland. And yet, the country currently only has six specialist nurses trained to support people with this condition.

With the number of people living with the condition worldwide set to double by 2040, Parkinson’s activist groups in Ireland are highlighting the need for more specialist nurses to help bring better care to those in the community.

Tony Wilkinson, chair of the Cork branch of Parkinson’s Association of Ireland, has played a leading role in the campaign, which has seen recent support from public figures such as Irish presenter and author Graham Norton.

Quoted in newspaper CorkBeo, Wilkinson said: “There is a serious lack of support for those of us living with Parkinson’s in this country. There is meant to be one nurse for every 300 patients, but we have less than 10 for over 12,000 of us. We deserve better.”

Led by Wilkinson, members of Parkinson’s community met with Minister for Health Stephen Donnelly inside the Irish Parliament building on 6 July. The event included a panel of speakers who took part in a discussion with politicians about services and community support for people with Parkinson’s.

“It is negligent how the state is treating people with Parkinson’s,” Richelle writes. “Many of those battling this condition do not have the voice (some literally due to the disease) and their caregivers are too worn out to fight the system. It has to stop.”

But the meeting in Parliament allegedly brought good news for the community. According to tweet by Parkinson’s advocate and attendee Gary Boyle, the group were able to secure a commitment from the Minister for Health around the provision of 20 new specialist neurological nurse posts in the government’s September budget – leading to hopes that this issue will continue to be properly addressed.

As of 13 July, the Minister has not publicly commented on or confirmed this potential development.

There is a serious lack of support for those of us living with Parkinson's in this country. We deserve better