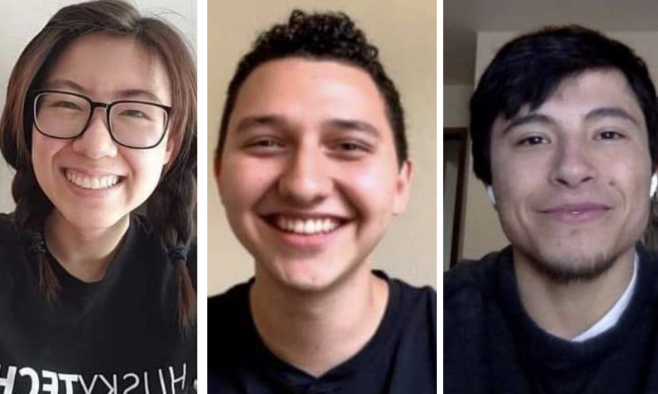 Tremor Vision is a web-based tool that detects and tracks Parkinson’s tremors. It looks to improve the diagnosis of Parkinson’s symptoms by providing a digitised version of the ‘spiral test’ – a commonly used method for detecting tremors by asking a person to draw a spiral on paper. The test will be administered through a touchscreen device, and can be used by caregivers to detect early-onset Parkinson’s and track patient progress.

The students behind the app – Janae Chan, Robert Minneker and Drew Gallardo from the University of Washington, US – are global finalists in Microsoft’s annual Imagine Cup, a competition for students looking to solve some of the world’s biggest problems. They are one of six teams who will compete for the winning prize during this year’s Microsoft Build digital event on 19-21 May.

For the Tremor Vision team, this means helping to advance diagnostic and treatment approaches for people with Parkinson’s by reducing the need for routine clinic visits.

Minneker said: “Parkinson’s is a progressive, chronic illness. The cause is unknown and there are no cures. Treatment is effective if the disease is caught early enough and early tremors typically begin in the fingers and hands, with up to a two-year delay from presenting in the lower extremities.

“Our platform began by digitising the popular spiral test with the power of machine learning. Additionally, there are many patients who travel vast distances to receive quality care, and symptoms can make it dangerous/impossible for patients to drive themselves; we believe Parkinson’s treatment should be modernised and incorporate a telemedicine component.”

Nevertheless, they emphasised that Tremor Vision is meant to assist medical practitioners rather than replace them. “I think the phrase ‘clinical decision support’ is really a key term. We’re giving them more data to make a diagnosis,” said Chan.

While Tremor Vision is still in its development phase, the team is already looking forward to testing it in clinical trials. They have been in contact with doctors and eventually hope to work with an electronic health record provider to enter a large market.

Minneker said: “Our current plan consists of partnering with global electronic health record (EHR) providers and distributing through physicians that treat Parkinson’s patients at hospitals and clinics that subscribe to those EHRs. Hospitals and clinics would pay a low monthly subscription fee per active user for our services. Our price point reduces travel burden and costs associated with routine clinical tests. We are a clinical decision support tool designed to supplement current Parkinson’s treatment plans.”

Chan added: “I think we have a lot of good points to sell and it’s definitely something that needs to be addressed, whether it’s Parkinson’s specifically or just making a lot of tests more accessible. I think this is a start.”

“Parkinson’s costs US $52bn each year in the United States alone and although there is no cure, treatment can slow progression of symptoms and increase life expectancy,” said Minneker. “Using Tremor Vision, subtle tremors can be detected early, thereby enabling early treatment.”

The tech giant announced the news at a recent technology event

A series of webinars for people with the condition