While filming I discovered the pure amount of energy that people with Parkinson’s use – the constant shaking Ieft me exhausted at the end of each day. 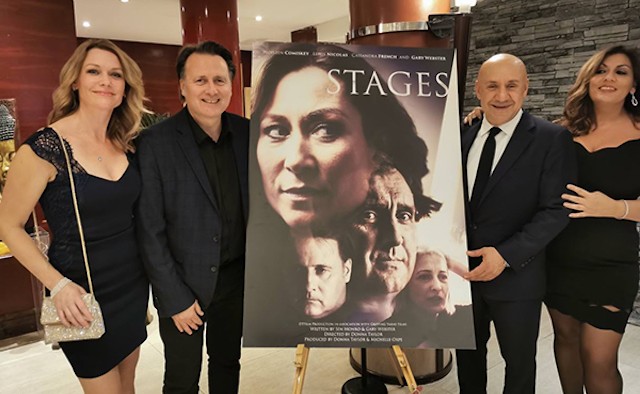 Premiering last week in London’s busy West End, our reporters attended the premier of ‘STAGES’ – a Parkinson’s love story based on a series of true events – to meet the actors and production team behind the film exploring the condition and love

“I’m sorry, I just wasn’t born to look after a cripple.”

There was a collective gasp from the 100-strong audience at The Courthouse Hotel in Soho, London, at the premier of ‘STAGES’, as actress Cassandra French delivered the line to her on-screen husband living with Parkinson’s .

Inspired by the true story of Russ Bradford and Charlotte Allen, who met at a Parkinson’s support group after their respective marriages had ended, ‘STAGES’ is an emotional tale offering an honest and hard-hitting portrayal of life with Parkinson’s.

The film, a collaborative effort between a team of volunteers over ten months, was produced on the shoe-string budget of UK £6,000 – and covered everything from sharing a Parkinson’s diagnosis with your children to the difficulties of smoking a cigarette. And it was the everyday realities of Parkinson’s that Noeleen Comiskey, who played the part of Charlotte Allen, found most significant.

She explained: “My grandmother has Parkinson’s so I know a fair a bit about the condition. But while filming I discovered the pure amount of energy that people with Parkinson’s use – the constant shaking Ieft me exhausted at the end of each day.”

She continued: “But the thing is they deal with that every day while getting on with life and going to work. I have a new awareness and respect for these unsung heroes.”

Asked what he thought of the film, one member of the audience commended ‘STAGES’ for being an “honest and human portrayal of Parkinson’s”.

Another found the representation of Russ’ wife, a Parkinson’s carer, the most striking. “You tend to forget about the carer, don’t you?”

Discussing French’s ‘cripple’ line, producer Sen Monro said the team debated whether to include it in the final cut.  “We mulled it over. Cassandra really didn’t feel comfortable saying it, but I decided to keep that line in because that’s what Russ’ wife really said to him.”.

For Lewis Nicolas – who played Russ – it was a learning experience for both audience and the cast: “What I’ve learnt about Parkinson’s is how little I knew until I was given this role. I think a lot of the general public think there’s actually more awareness our there then there actually is.”

Sen added: “Unless Parkinson’s affects you personally it’s likely you won’t know anything about it. I’ve learnt so much about what people with Parkinson’s go through on a day-to-day basis.” 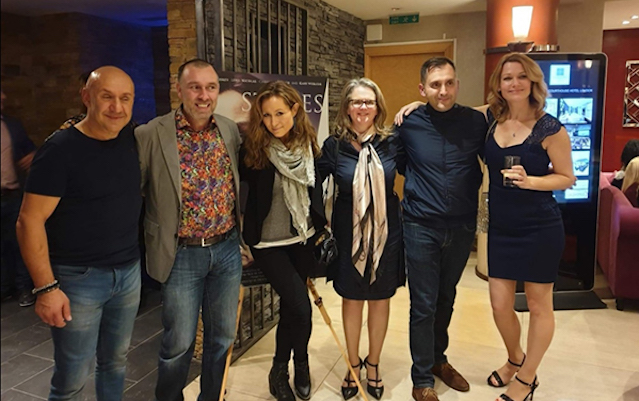 Staying true to the story

Throughout production, raising Parkinson’s awareness – and staying true to Russ and Charlotte’s story – were core to everything the team did.

Donna Taylor, director and head of production company, DT Film Productions said: “I have a couple of friends with Parkinson’s so I’ve seen that deterioration. I wanted to help in my own way. DT Films is all about making positive change through film, and that for me is what I set out to do.”

The event was also attended by Russ Bradford and Charlotte Allen, who watched their story come to life on the big screen for the first time.

“I’m absolutely amazed that they told our true story and told it as best they could,” explained Charlotte. “We’re so grateful that they put it out there, covering Parkinson’s, as well as other serious issues like mental health and suicide”.

But what next for the couple? Could there be a sequel on the cards for Parkinson’s community?

“Russ and I have loads more in our life story so maybe there will be a second chapter,” smiled Charlotte. “But our main aim is helping people with Parkinson’s right now.”

While filming I discovered the pure amount of energy that people with Parkinson’s use – the constant shaking Ieft me exhausted at the end of each day.