I’m very excited that my invention could potentially aid in treating Parkinson’s from the root of the issue, and most of all, to potentially help patients soon 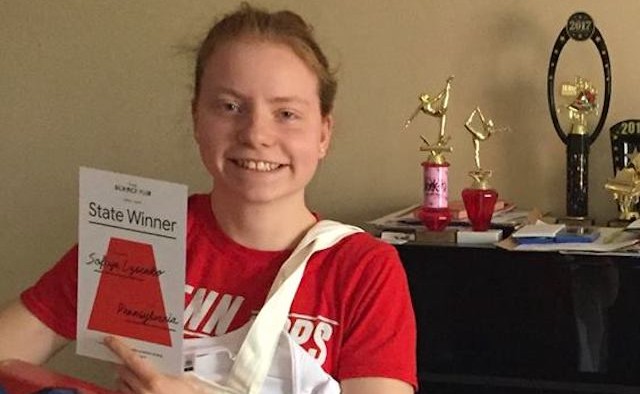 We talk to Sofiya Lysenko, a 17-year-old student in the US, who invented a DNA nanorobot that could offer more targeted treatments for Parkinson’s. She tells us about the inspiration behind her invention, being recognised at the Google Science Fair, and why she thinks more young people should embark on tackling neurological conditions

Hi Sofiya, here at Parkinson’s Life we have heard so much about your new invention for people living with Parkinson’s. Can you tell us about it?

My invention is a DNA nanorobot structure that helps people with Parkinson’s by providing them with a much more accurate treatment that targets specific cells rather than all cells in the brain. I came up with the idea after reading a paper by US researcher Lulu Qian on walking molecular robots.

Currently, a large issue with neurodegenerative disease treatment is that it does not effectively cross the blood brain barrier, a border that prevents foreign substances in the blood from entering  the brain. Therefore, it is difficult to get stable amounts of the treatment drug across to the brain.

By providing more targeted treatment, my invention could hopefully lessen side effects and make it possible for constant amounts of medication to cross the blood brain barrier and be administered to patients.

What exactly is a nanorobot?

A nanorobot is a tiny machine that comes in many different forms. Nanorobots sense and respond to their environment using mathematical calculations.

Can you tell us a bit about yourself and your background in research?

I am originally from Lviv, Ukraine, and came to the US when I was around three years old. I’m now 17 and based in Philadelphia. I first became interested in this area of research through taking part in school science fairs.

I am fascinated by the ability of computation to impact both a biological space and the things we interact with daily, such as our phones or laptops.

In addition to research, I play the piano and violin, and I’m a competitive chess player. I’m the founder of a non-profit called Girls Code Chess and I’m also involved in the Ukrainian American advocacy scene.

What are the next steps for developing your invention?

I’m very honoured that my invention was recently recognised by the Google Science Fair – and I hope to continue developing the project. I am most excited about the technology’s potential to provide computationally accurate drug delivery, which has not been investigated before.

Much of this project requires sequenced DNA strands, which can be very expensive. I plan to gain funding to receive material that would make it possible to test the invention.

Have you been personally affected by Parkinson’s in any way?

I don’t know anyone with Parkinson’s. However, I’ve encountered the disease in many ways – from a neurobiology perspective, robotics perspective and pharmaceutical perspective. I’m very excited that my invention could potentially aid in treating Parkinson’s from the root of the issue, and most of all, to potentially help patients soon.

Where do you see yourself in the next 10 years?

I see myself hopefully conducting research of my own, leading a group of researchers, and teaching at a university. I think more young people should conduct research into treating neurological conditions – and I hope my project inspires more students to embark on these issues.

I’m very excited that my invention could potentially aid in treating Parkinson’s from the root of the issue, and most of all, to potentially help patients soon

A series of 12 videos to offer practical Parkinson’s advice

What would you do if you had one hour more of ‘on time’ each day?