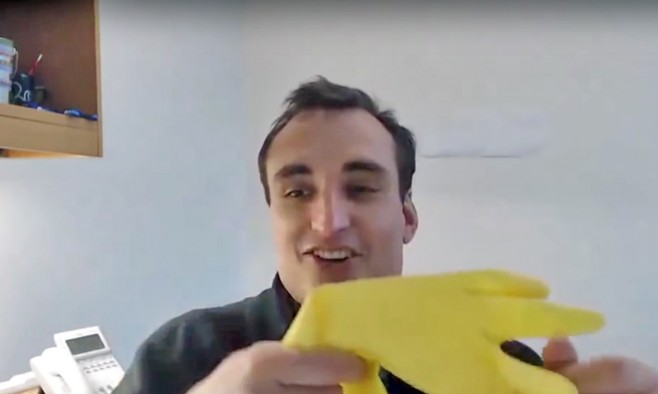 Parkinsons1day social experiment connects patients and carers so they can exchange and learn about each other’s experience of Parkinson’s disease.

Using an ‘empathy kit’, which contains rubber gloves, ankle weights and ‘pills’ (sweets), carers experience what it might be like to have the condition for a day by linking up with a person living with Parkinson’s via online video connection.

Parkinsons1day ‘teachers’ – people living with Parkinson’s – send videos of their freezing episodes to a partner without the condition, such as their carer, so that they can see what those symptoms look like.

Watch a Parkinsons1day project video below by Sara Riggare, doctoral student at the Karolinska Institute in Stockholm, Sweden, where the topic of her PhD is ‘Personal observations as a tool for improvement in chronic disease’.

‘Learners’ do exercises like walking backwards when their teacher is in an ‘off’ period to recreate the sensation of not being to walk properly.

Other exercises in empathy include wearing rubber gloves, which mimics the physical limitations that can arise with the condition, while ankle weights are used to replicate mobility challenges. Sweets are ‘taken’ instead of medication and learners administer a dose whenever their partner does.

Chris, a ‘learner’ taking part in the social experiment, said: “I know what you’re thinking: wearing dishwashing gloves for an hour is not the same as actually living with the dexterity struggles that some Parkinson’s patients have to endure, but it puts our learners in the right frame of mind – and that’s the point of all this, right? Through these efforts, we can pose questions to them about their mentality and emotions throughout these experiences.”

“Parkinson’s is left outside – they come here to dance”