It means a great deal to the people around me, and the fans 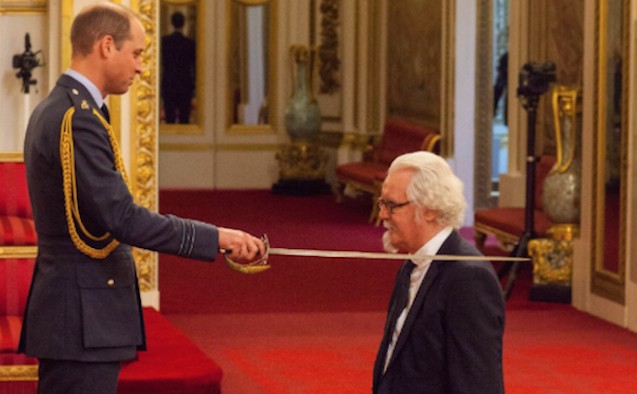 Iconic comedian, actor and person with Parkinson’s Billy Connolly, has been awarded a knighthood by Prince William at Buckingham Palace

Billy Connolly, the legendary comedian and person with Parkinson’s, has been knighted for his services to entertainment and charity.

Connolly, who is 74, attended the ceremony at Buckingham Palace on 31 October, where he was presented with the honour by Prince William.

Afterwards, the Scottish comedian said he was “stunned” by the award. He said: “I’m kind of numb. It means a great deal to the people around me, and the fans.”

Displaying his famous sense of humour, Connolly joked: “I am a little embarrassed ­– but deep within me, I’m very pleased to have it. I feel as if I should be called Lancelot or something. Sir Lancelot, that would be nice. Sir Billy doesn’t quite have the same ring.”

After the ceremony, Connolly also spoke candidly about his Parkinson’s symptoms: “I’ve good days and bad days. Weird things like you hear my voice is changing, I walk kind of weird. People think I’m drunk, but they always thought I was drunk anyway.”

Connolly, who was diagnosed with Parkinson’s in 2013, is well known for his charity work spanning several decades – including working with organisations The Celtic FC Foundation and the Live Aid benefit concerts.

In March this year, the well-loved comedian appeared in a tear-jerking appeal for Comic Relief UK, in which he reflected honestly on his own health, saying: “Hello, Billy Connolly here asking for your cash. Not for me obviously, I’ve got cancer and Parkinson’s.”

Social media users were quick to praise Connolly, nicknamed The Big Yin, for receiving the accolade.

Congratulations to Billy Connolly who today received a Knighthood from The Duke of Cambridge for his services to entertainment & charity. pic.twitter.com/8ZVK5pChKK

Comedian Ian Royce was equally complimentary, describing himself as “beaming with pride”.

It means a great deal to the people around me, and the fans

How one carer and her husband overcame “terrifying” diagnosis