The music has this amazing, temporary but powerful healing effect because I can literally fling my walking stick aside when I finish singing and walk quite normally for an hour or two. 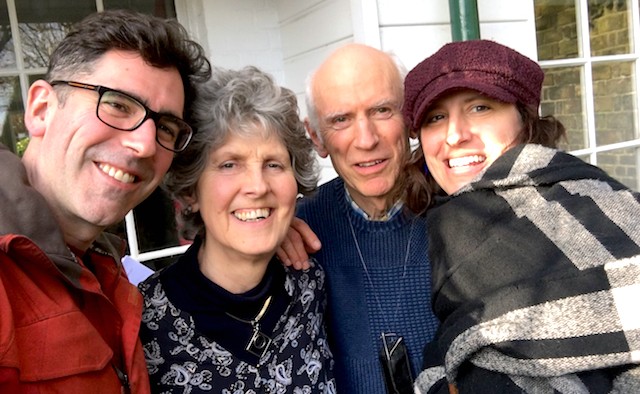 We talk to composer and songwriter Harold Chaplin from Hertford, UK – who was diagnosed with Parkinson’s in 2007 – about this special time of year, explaining his condition to his grandchildren and writing Parkinson’s inspired songs

I’m 72 and a retired music teacher. I live in Hertford, UK, with my wife who is my principal carer. I have two children and they both have children, so I’m very blessed with grandchildren.

I was diagnosed with Parkinson’s in 2007 and the first symptom I noticed was the wobbling of my right foot when driving. I couldn’t control the accelerator in the car properly. At that time, I had a brain scan and my wife agreed to be the control model. It was shown that she had twice the amount of dopamine of a typical post-menopausal woman. So that had us wondering whether she could transfer her spare dopamine over to myself. I find that one has to be light-hearted about things!

I hope in the future we develop artificial dopamine. One of my songs goes: ‘How does it happen? Nobody knows. All we know is that we don’t know. But in the meantime, it’s on with the slow show’.

When did you start writing songs?

I started writing songs about 30 years ago, I’ve previously written musicals and I’ve taken to jazz performances. Two years ago, I played some jazz in a shopping centre in Hertford and raised about UK £500 as people walked past. I enjoyed fundraising, so did some more this year and raised money for Parkinson’s UK.

I also write songs about Parkinson’s where I address some of the issues I have in my lyrics.

What inspired you to start writing Christmas songs?

Christmas is very special, and I like to go back to the basic message of what it means. One of my recent carols is called ‘Peace, silence and wonder’ and it’s scoring quite big on Facebook.

The Hertford Choral Society will be performing two of my Christmas carols at their Christmas Concert on 15 December. We will be fundraising for Parkinson’s research with a bucket collection for donations. I expect to raise around UK £500.

Do you find that music has a positive effect on symptoms of Parkinson’s?

Absolutely, and I notice it when I sing with the Hertford Choral Society. The music has this amazing, temporary but powerful, healing effect because I can literally fling my walking stick aside when I finish singing and walk quite normally for an hour or two.

I can walk around and talk to friends and they forget I have Parkinson’s – and for a moment, I forget too. Of course, it recurs around bed time – it’s a tricky thing really.

I also lead an exercise group locally once a fortnight with half a dozen people. We rent a church hall and exercise our voices by updating each other loudly on what we’ve been up to.

What made you decide to produce your music into an album?

Well it was my son’s decision – he wanted to make a showcase of his dad’s compositions. It’s called ‘My strength and my song’, and it combines everything I’ve written over 30 years in 11 tracks. People who’ve listened to it have said it’s ‘stunning’, ‘amazing’ and ‘wonderful’. You can listen to it on Spotify and iTunes.

My favourite tracks are the Christmas carol ‘The holly and the ivy’, which I’ve turned into jazz, and ‘In the bleak midwinter’, which is a very moving ballad.

I hope to get my songs about Parkinson’s online too to increase awareness – that’s what my incentive is.

Has being diagnosed with Parkinson’s affected your song writing?

It didn’t make a difference; my song writing went on.

To tell you the truth, the problem is the act of concentrating. I think other people would agree with that. To write a song, you’ve got to concentrate. You’re juggling with the words, juggling with the music and trying it out. As I’ve said, I’m blessed with a wonderful family and my son lets me run ideas by him. It’s brought us closer together because I just don’t have the concentration I used to have.

Is Christmas a particularly difficult time of year for people with Parkinson’s?

Christmas can be difficult for some people but I’m very fortunate really. I have a lovely family and they all make a fuss. I can treat speaking up around the family table as an exercise.

What are you looking forward to most this Christmas?

Probably the grandchildren. They are exhilarating but exhausting. This place turns from a monastery into a madhouse. We’ve got them running around the place the whole time, but they’re great.

It is difficult explaining Parkinson’s to them of course. There is an online storybook that I downloaded from Parkinson’s UK which is quite good. I was able to use it to talk to my six-year-old granddaughter. My other two granddaughters are four and two and they basically think I’m a wobbly old man.

Parkinson’s is difficult to explain in the sense that it’s not a disease – you can’t pass it on to somebody – it’s a condition.

Do you have any tips for the festive season for people living with Parkinson’s?

Keep moving and don’t sit down for too long! And if you drink, drink little. I love my wine, but it just finishes me off.

The music has this amazing, temporary but powerful healing effect because I can literally fling my walking stick aside when I finish singing and walk quite normally for an hour or two.

Perspectives on managing a career and the condition