Our partners and the people around us need to be flexible. And we need to be more communicative 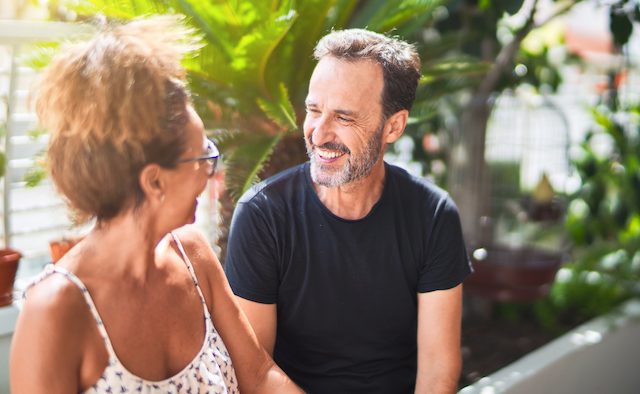 From how to communicate clearly and maintain a healthy relationship, to how Parkinson’s disease symptoms can affect sex and intimacy – panellists in a Davis Phinney Foundation webinar spotlight their experiences, share stories, and offer their advice for others with the condition

How can people with Parkinson’s maintain healthy relationships following diagnosis? At a recent webinar from US charity Davis Phinney Foundation, four women focused on ‘Relationships, intimacy and Parkinson’s’, discussing how all these can be impacted when living with the condition.

When Karen Frank, a retired nurse anaesthetist from the US was diagnosed with Parkinson’s at the age of 47, she said her relationship felt “dicey” at first.

Karen had been dating her partner for five years and they had just bought a home together. “I was consumed by this diagnosis initially, and it really put a strain on my relationship,” she said. “It took some time to come through that fog and turn it into something that was life enhancing and life improving, and obviously that happened because we were able to come through and weathered that storm together.

“We actually did get married three years after my diagnosis, which was wonderful, and he continues to be my greatest support.”

Heather Kennedy, a US writer, speaker and advocate who was diagnosed with Parkinson’s disease aged 41, said that that communication is key to healthy relationships.

After a diagnosis, she explained: “The impetus to communicate well is on us. And while we’re making all our plans […] life happens regardless, and the body does what it wants. It’s not exactly a ripe place for romance or things to go really smoothly. So our partners and the people around us need to be flexible. And we need to be more communicative.”

“We learned that we had to talk often and honestly”

To help their relationship, Karen and her husband scheduled a check-in every weekend. “It was just 20 minutes to bring up anything to one another that needed a little discussion,” she explained. “What that allowed us to do is compartmentalise some time to dedicate to those difficult conversations but also to limit it so that it wasn’t all-consuming in our relationship all the time… That really has made a difference for us.”

Soania Mathur, a retired family physician from Canada who was diagnosed aged 27, shared a similar experience. While she and her husband understood Parkinson’s disease from a medical standpoint, she said, “we were newbies in terms of how to deal with it as a relationship.”

“He’s an extremely understanding person,” Soania added, “but I admit that for the first 10 years of my diagnosis, I didn’t really accept it myself emotionally, so it was very hard for me to guide him in terms of what I needed in the relationship when it came to Parkinson’s disease.”

Kat Hill, a retired nurse-midwife from the US who was diagnosed at age 48, agreed that “you have to communicate more” when living with Parkinson’s. Kat, who has been married for 31 years, said: “We really learned that we had to talk often, and honestly, and also not in the heat of the moment when I was having that really tough time or my dystonia hurt and I was feeling down or bereft or frustrated.

“There’s more to intimacy than sex”

Asked to share the greatest challenge in their relationships, the discussion turned to intimacy and sex.

“There’s more to intimacy than sex,” said Kat. “My husband … we were married at 23 and 25 so we were fairly young, and we’ve both aged and changed. I think part of it is that we also talk about it, that is, you know, this is different for me, this is harder for me… And we talk about who is going to initiate and what that looks like and is this enough for you?

“It may change tomorrow but I think keeping the communication going, making it playful, accepting that our bodies are different and telling him that I love him a lot – sometimes that’s enough intimacy for a day.”

For Karen, going through menopause, weight changes and “Parkinson’s on top of it”, has made intimacy difficult. “I’m not as excited all the time,” she said. “Sometimes in the evening I have symptoms, I’m not moving well or I have cramps or any number of things that could be going on.”

But she added that while the relationship dynamic is different, she’s starting to accept it: “I’m enjoying that, growing into that.”

“It’s very hard to date with Parkinson’s because, one, when do you disclose? Two, could you even hide it if you wanted to? Three, how soon do you tell them that you might not be able to control your facial expressions or you’re twitching or something’s happening that doesn’t seem quite okay,” she said.

“And honestly, if I didn’t have Parkinson’s, I don’t know that I would go online and connect with someone with Parkinson’s – not because I think that they wouldn’t have love to offer; I wouldn’t have understood it.”

That’s why, she added, education and normalising the experience of people with Parkinson’s is so vital.

Our partners and the people around us need to be flexible. And we need to be more communicative

Sharon Krischer shares her diary from the World Parkinson Congress 2019