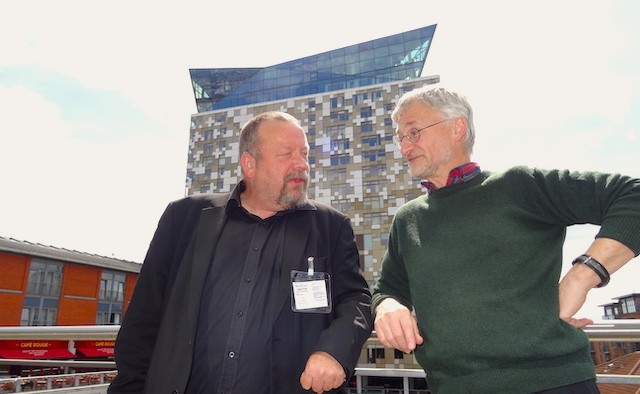 We talk to Ray Wegrzyn (left), founder and chairman of Parkinson’s EQUIP, a UK charity that gives grants to people with Parkinson’s so that they can improve their quality of life through sport and the arts.

After being forced to retire because his Parkinson’s symptoms became unmanageable, Ray explains how setting up the charity ‘filled the gap’ in his life, the ways writing has helped him come to terms with his diagnosis – and his appearance on UK channel BBC Radio 4

Hi Ray, thanks for chatting to us today. When were you diagnosed with Parkinson’s?

I was diagnosed with young onset Parkinson’s in 1995 aged only 39. I continued to work for another 16 years but I eventually had to stop because of my health. It took me a long time to get my head around not being busy anymore.

As a person with young onset Parkinson’s, was it difficult to find support in the nineties?

Yes, it was. The stereotype of the old man shaking as he walks down the road was still very much in people’s minds, because that’s the most visible aspect of Parkinson’s. Even today, people still don’t realise that there is such a wide range of visible and invisible symptoms. I talk about young onset even though I’m 63 now, but people do struggle to understand why I can’t move from a certain position quickly, or why it takes me so long to put my money away in my wallet in the supermarket queue. They don’t associate those issues with Parkinson’s and that’s why it’s so important we continue to raise awareness.

What’s the hardest part of living with Parkinson’s?

A few years ago, it was the fatigue. I had no energy to get through the day and eventually I made myself ill with tiredness. Now, the worst part for me is the anxiety about not knowing what the future holds. I know how bad it could be, and nobody wants that. Thankfully my condition seems to be progressing slowly.

What inspired you to start charity Parkinson’s EQUIP?

I was inspired to start the charity to fill the gap in my life after I retired. Even though I had taken up the saxophone and improved my social life, I had once had a senior job managing hundreds of staff. It just wasn’t the same. I wanted the charity to, first of all, be a little different to other Parkinson’s charities, but also to give me what I needed – something with administration, a structure and a personal touch. It began with me and three friends and has slowly built from there.

What are Parkinson’s EQUIP’s aims?

Originally, we aimed to raise money to provide grants to people with Parkinson’s who wanted to make the most of their lives through either sports or arts activities. We were offering a starter pot of money to pay for a sports membership or buy some kit.

It’s worth remembering that a lot of people with young onset Parkinson’s aren’t able to work and are dependent on benefits, so doing sports or other activities aren’t always financially possible for them. We wanted to reach out to these people.

This approach was slow to take off, so we eventually decided to raise funds for Parkinson’s organisations who were already established as this this worked better.

Can you give us an example of some of the work that Parkinson’s EQUIP has done to help people with the condition?

A Parkinson’s exercise group in Chatham, UK, wasn’t doing too well so we agreed to fund them for a year. We also connected them to the School of Sports and Exercise Sciences at the University of Kent so that students could come and run the group. I went down to visit, and the students raved about how much they loved helping – and also how much the experience would boost their CV.

We also received a donation from a woman whose husband was a regular member of the group. She thanked us and said we had saved his life. It made me wonder what sort of a state of despair he must have been in before.

Another project of our is we provide bursaries for dance instructors who want to teach to people with Parkinson’s. We’ve helped over 35 instructors to qualify so far.

What was the inspiration behind your book ‘Out of Order – My Life with Parkinson’s’?

I wrote the book because I was so distraught after retiring – I felt like I was just left on the rubbish tip. My career had been my identity and having to retire, rather than wanting to retire, made it even worse. Writing that book enabled me to think straight and to figure out what exactly had happened to my life. I found that, when writing, it flowed easily, and it was more of an outpouring.

You appeared on The Listening Project, a UK radio show on BBC Radio 4. What was that like?

My friend Tom, who is also a trustee of EQUIP, came up with the idea that we should go on and talk about the charity.

We talked the house down and the editors had to cut our hour-long conversation to just five minutes. It was interesting that the theme they focussed on was what happens to a close friendship when somebody suddenly becomes unwell and is unable to do things they used to do. How do people deal with that? I was very impressed with the finished cut.

What are your hopes for the future?

I want to stay involved with the charity for as long as possible, but as time goes on, I think I’ll find myself less able. At some point, I will have to stop and hand the chairmanship to someone else. For now, I just want to keep building the charity and get money out to people with Parkinson’s who need it.

You can listen to Ray on The Listening Project here.

Recognising and rewarding the work of carers via mobile platform