Anyone watching these interviews and looking at the imagery, hopefully will change their thinking about living with Parkinson’s 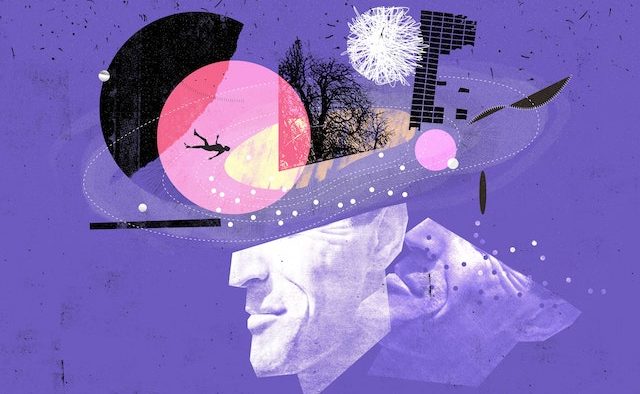 To mark Parkinson’s Awareness Month this April, a new campaign – ‘Putting Parkinson’s in the Picture’ – is using art to redefine the image of Parkinson’s disease and highlight the often-hidden challenges of living with the condition. We meet the artist involved – award-winning illustrator Nate Kitch – and his first three collaborators

“It feels like there are blackbirds that are parking themselves on your soul.”

This vivid description of what it sometimes feels like to live with Parkinson’s comes from a creative collaboration between the world-renowned artist Nate Kitch and people living with the condition, as part of a new campaign that aims to communicate the often-hidden lived realities of Parkinson’s.

Nate – whose illustrations have been published in The New York Times, The Guardian and The Economist, among others – uses a combination of hand-drawing, photography, typography and digital imagery and has won an award for his work exploring the emotions behind the patient experience.

Now he is bringing his focus to Parkinson’s through the new campaign – ‘Putting Parkinson’s in the Picture’ – launched this month in the UK by Kyowa Kirin International.

The campaign aims to change the public perception of Parkinson’s and encourage people to think more broadly about the condition, going beyond its visible symptoms to its impact on the way people think and feel.

“Art definitely has an opportunity to reveal hidden stories because sometimes it’s not easy to communicate with someone with words,” says Nate. “With art, it’s all there spelled out for you. It hits you with more immediacy.”

For the first phase of the campaign, Nate spoke with two men with the condition – David AJ, who was diagnosed with Parkinson’s 11 years ago and is now in his 50s; and David MR, who is 55 and was diagnosed seven years ago. He also spoke with David MR’s wife Natalie MR. The participants did not want to give their full names.

Nate then used elements from those in-depth conversations to create powerful collages that bring out the contrasts between the pain and darkness with brighter moments of living with the condition.

“We want to help paint a better picture of the broad spectrum of symptoms,” explains Abdul Mullick, President, Kyowa Kirin International. “No individual experience of Parkinson’s is the same as any other. By interpreting the stories of those directly impacted by Parkinson’s into art, it has provided an opportunity to visually demonstrate the complex nature of the condition and daily struggles that might be faced.”

“There’s no right or wrong way to have Parkinson’s”

In his conversation with Nate, David AJ describes a bad day as feeling as though he is steadily being imprisoned within his own body, while on a good day, he says it’s important to make sure he stays present in the moment.

“It’s a conscious choice,” he says. “I think to exist with Parkinson’s is quite easy, but to actually live is a conscious decision that takes quite a lot of extra work.” 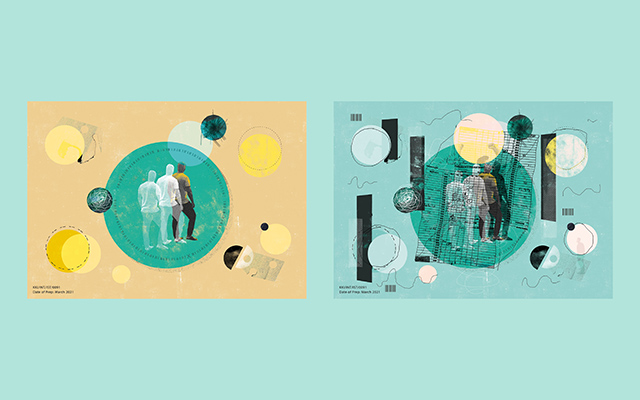 In their conversation, meanwhile, David MR told Nate that he found himself facing an “uphill struggle”, adding: “It feels like there are blackbirds that are parking themselves on your soul.” Yet he chooses to look for the positives in life. “There’s no right or wrong way to have Parkinson’s,” he says.

The illustrations created by Nate in response (below) features two faces, one facing the light and another in the shade, and structural shapes from the symptom diaries. “The dichotomy of the two, it’s just exactly how I feel sometimes,” responds David MR. “This is a balance between me controlling the darkness, controlling the fear, controlling the horrible part of Parkinson’s – but also accepting that it’s there and it’s real.” 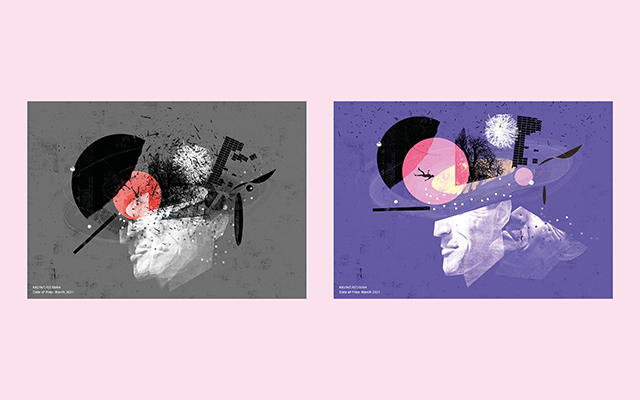 ‘David MR – ON and OFF’ by Nate Kitch

When David MR was first diagnosed, his wife Natalie MR told Nate, she felt grief – as though life had turned “black and white” and she was losing the man she married.

“I read something about being married to someone with Parkinson’s and it said, ‘Don’t become his carer – make sure you stay as his wife’,” she says. Today, while the pain is still present, she believes “the colour has come back” into their marriage.

Nate’s illustrations for Natalie MR demonstrate her and her husband’s faces, connecting and mirroring, and using a light and dark analogy. Seeing the two illustrations side by side, Natalie MR says: “They make sense of each other together – it makes them both come alive.” 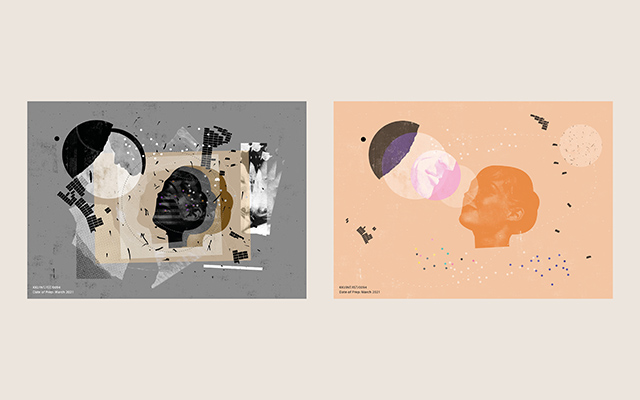 ‘Natalie MR – Past and Present’ by Nate Kitch

A “fresh” look at Parkinson’s

Nate describes the process of talking with his three collaborators as “eye-opening”.

“I think we have this projection of what Parkinson’s is – of people shaking – and that’s through our own ignorance,” he says. “You just have this vision of what it is and it’s maybe someone later in life, who’s got less mobility, whereas it’s not that at all. It can affect you at a much earlier age and I think that’s quite powerful to learn and realise that you’re imposing your idea of what Parkinson’s is.”

He adds: “I feel this is some of the most, if not the most, important set of images I’ve ever made. I think anyone watching these interviews and looking at the imagery will take something fresh away with them and hopefully it will change their thinking about living with Parkinson’s.”

Find out more about ‘Putting Parkinson’s in the Picture’.

The new campaign ‘Putting Parkinson’s in the Picture’ aims to raise awareness and understanding of how Parkinson’s truly impacts how people think and feel, and educate about the condition‘s broad spectrum of symptoms. The campaign is sponsored by Kyowa Kirin International.

This article is sponsored by Kyowa Kirin International. The information in this article is given for information purposes only and does not represent an endorsement by the European Parkinson’s Disease Association of any particular treatments, products or companies. This article is not a substitute for advice from your doctor, pharmacist or other healthcare professional. Parkinson’s Life makes no representations or warranties of any kind, express or implied, about the completeness or accuracy of information provided.

Anyone watching these interviews and looking at the imagery, hopefully will change their thinking about living with Parkinson’s