When you have Parkinson’s, you are looking down the barrel of a gun that has been fired with a bullet coming very slowly towards you. 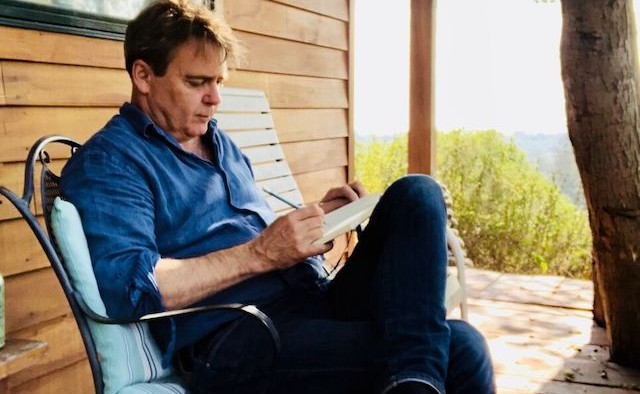 Our first ever Parkinson’s Life poetry competition attracted entries from around the world. Ahead of our interview with the winner next week, we caught up with runner-up Marc Woodward, on everything from how Parkinson’s “crept up on him” aged 54, what’s on his ‘bucket list’ – and the inspiration behind his fantastic poem ‘San Francisco’

The global response to our first ever poetry competition was overwhelming. It was a delight to read all of our reader’s poems, and a real challenge narrowing it down to just two entries. After careful deliberation we are delighted to announce Marc Woodward, who works in financial services and is based in Devon, UK, as our runner-up.

Marc, who was diagnosed with Parkinson’s in 2016, wrote his winning poem ‘San Francisco’ while on a writing retreat in Santa Cruz, US. The poem, which deals with feelings of nostalgia, hints at symptoms of the condition and references the idea of the ‘bucket list’ – all set against the colourful backdrop of San Francisco, US – really tells a story.

We caught up with Marc, who told us about his passion for poetry and music, his experience of the condition and why he doesn’t want to be known as ‘a poet with Parkinson’s’.

Why did you enter our competition?

I write a lot of poetry anyway, and I have Parkinson’s so I thought I should have a go! I don’t enter a lot of competitions usually.

Have you been published before?

I published a collection of poetry called ‘Hide Songs’ in 2018. My poetry has also featured in various publications and journals.

Are you a full-time poet?

Unfortunately not. I work in financial services. Every poet has a day job, even the greats. T.S. Eliot was a bank manager. I think it’s good to have a day job, as you need outside stimulus instead of just burying your head in books all the time.

I was diagnosed in January 2016 but I had been having symptoms for years without any idea what Parkinson’s was. I noticed that when I was playing music, I wasn’t moving as smoothly as before. I couldn’t play like I used to, and I just put it down to getting old. Parkinson’s crept up on me and I didn’t even realise it.

What was the inspiration behind ‘San Francisco’?

I wrote it while on a writing residency in Santa Cruz, US, last October. In the 80s I wanted to go to San Francisco to play music, but never did, which the poem reflects on. Finally, I went last year. So, it’s to do with a bit of a ‘bucket list’ thing really.

When you have Parkinson’s, you are looking down the barrel of a gun that has been fired with a bullet coming very slowly towards you. I decided I needed to make the most of the opportunities that come a long. That’s the positive side of the disease, you think “maybe there’ll be a cure one day” but in the meantime you need to just do things that you’ve always wanted to do.

Tell me about your experience of Parkinson’s.

So far, I’m really trying to reduce stress in my life, especially work-related stress. Sadly, I don’t play gigs any more, which had been a central part of my life for a long time. I can play okay, but I can’t play like I once could. It just doesn’t feel the same anymore. Parkinson’s has knocked my self-confidence, but it has also encouraged me to (as much as it is a cliché) ‘live for the moment’.

Do you find writing an outlet for your Parkinson’s?

Who is your favourite poet?

There are lots. I like Edward Thomas, the British nature writer. I love the American writer Billy Collins, and Robert Frost. When writing ‘San Francisco’ I drew inspiration from all of them, but the poem’s particular narrative, spoken style comes from Billy Collins. Most of the stuff I usually write is very nature oriented. 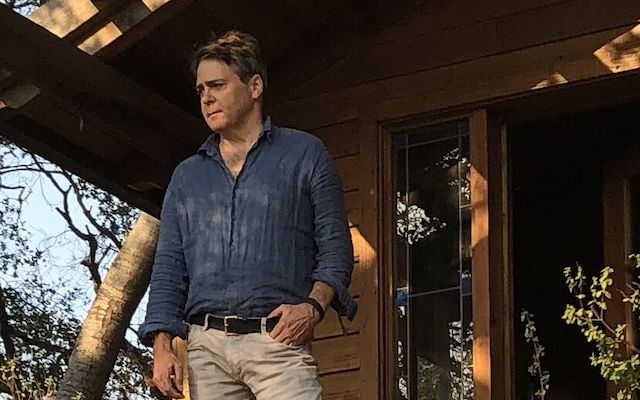 Marc Woodward at his writing residency in Santa Cruz, US.

“It’s an odd thing but anyone who disappears is said to be seen in San Francisco.”  – Oscar Wilde

on the eastern side of Alamo Square.

I eat at the Absinthe bar in Hayes –

tomato bisque and a yellow Sauvignon.

I recall years back in Manhattan

through the sodium limbo

and a high wall of windows

blinking on and off

– as if the whole building was trying its luck

in a giant game of tic-tac-toe.

I think about chance and odds.

At nineteen I wanted to move here,

I bought Grisman LPs, a guide to the city,

Instead I stayed home, went to work,

married and made a family album.

And though I never doubted how right that was

being here at last eases an old pain.

– and Willy, his lilac poodle.

Mike has a harmonium and a baby grand.

They smile toothily at each other

across the Victorian drawing room

like the two gay lodgers who appear for breakfast

passing coffee back and forth across the table.

We chat about the downtown homeless and trams.

I sit on my  trembling left hand.

The one which stumbles on frets where once it flew.

Insurance money in my jeans, I plan my last day in town.

find a seafront bar where a side road ends

and watch the sun drop like a slice of lemon

into the shivering gin of the Pacific.

When you have Parkinson’s, you are looking down the barrel of a gun that has been fired with a bullet coming very slowly towards you.