Join hundreds of other organisations and #UniteForParkinsons today on World Parkinson’s Day, 11 April 2017. Make sure you share and tweet the hashtag to make it go viral on social media and help raise awareness. We are proud to be the official media partner for the campaign. 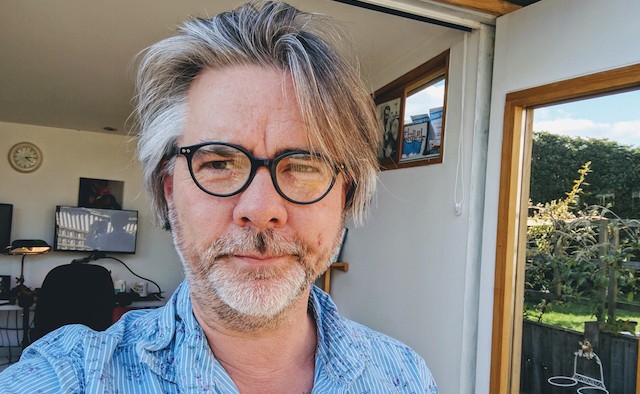 Mike Bell is a designer living with Parkinson’s, who 18 months ago, embarked on an on-going creative project to write a poem every day in an attempt to reduce the mental decline that Parkinson’s can cause. Here, he joins the #UniteForParkinsons campaign with this World Parkinson’s Day-themed poem

I am engaging in the #UniteForParkinsons campaign today on World Parkinson’s Day by writing this special poem. As my words suggest Parkinson’s can be a state of mind, rather than an illness, as it can change your whole view on the world.

These words will not be my sick complaint,
not my dull litany of low-dulled pains –
neither bellows of my half-swallowed fears,
no sand man damming floods of tears:

Instead I will lift prizes that others miss,
those wasted seconds which they dismiss.
This is my crime spree, my timely dance,
I snatch, a poacher, trapping every chance.

Join me, in theft, even you, the still-fixed,
let us steal time before no time exists.
Please hold the torch high, it shakes in my grip,
aim the weak beam at that prize which I seek.

See there, in the shadows, a life’s remains,
a lost loot of time – which is mine to gain.
I will take such disposals, all so discarded,
and burn it with verse, now herein, recorded.

These words are the ticks of my observed tongue,
all that remains of our days that have run:
I reduce the weight of my loathsome disease
by stealing the life that others leave.

On 5th November 2015 I put aside my brain-training software and decided to battle risks of Parkinson’s-related reduced cognitive function by writing a poem every day.

This commitment has become an online collection of over 600 poems, made up of 40,000 words, covering many subjects. It has forced a radical shift in my creative world.

My ‘proper job’ is experience designs – creating events, exhibitions and experiential concepts in 3D for clients around the world – in a freelance capacity. Recent projects include set designs for British pop star Ed Sheeran, an MI6 building launch, and endless exhibitions for packaging companies – it can be anything at any time.

My poetry has become a wonderful distraction and has helped me to communicate my personal and public struggles – and wins – under Parkinson’s thumb. I have now published elements of my work with individual print and online publications, as well as providing readings in the UK at universities, schools and Poetry Society events. I have just been invited to perform my poetry alongside a BBC performer, and I am planning a show for the Edinburgh Fringe festival this August centred on Parkinson’s disease and poetry

The first two years of collected works are being edited professionally and should be available later this year in print and ebook format.

Join hundreds of other organisations and #UniteForParkinsons today on World Parkinson’s Day, 11 April 2017. Make sure you share and tweet the hashtag to make it go viral on social media and help raise awareness. We are proud to be the official media partner for the campaign.