‘Deciding to have DBS surgery’, the 10th episode of the multi-award-winning Parkinson’s life podcast, is available now on Apple Podcasts, SoundCloud, Spotify and Google Podcasts.

Please rate and review the episode to help others find us – and if you’d like to take part in future episodes, share feedback or offer ideas, get in touch at editor@parkinsonslife.eu.

It’s all about quality of life, when it comes down to it 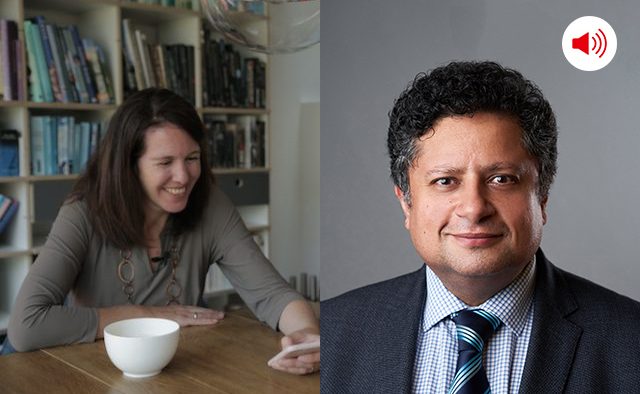 What goes into the decision to have DBS surgery? In a new podcast episode funded by Medtronic, professor of neurosurgery Keyoumars Ashkan and Parkinson’s advocate Cathy Molohan discuss what to consider before undergoing deep brain stimulation

How do you make the life-changing decision to undergo deep brain stimulation (DBS)?

That’s the choice Germany-based Cathy Molohan was faced with a few years ago. “The decision to have deep brain stimulation is not taken lightly,” says Cathy, who was diagnosed with Parkinson’s in 2011 after her husband noticed a tremor in her hand.

“In the beginning, you’re told, ‘Okay, you’ve got this disease – it’s chronic and it’s not going away.’ So, you take your medicine and digest for a while. Then I wanted to look into what the future would hold.” This led her to research DBS, a surgery which involves inserting electrodes into the brain to change certain electrical signals associated with Parkinson’s symptoms.

Joining Cathy on the latest episode of Parkinson’s Life podcast is Keyoumars Ashkan, professor of neurosurgery at King’s College Hospital, UK, who has supported numerous patients through DBS over nearly two decades as a neurosurgeon.

“Tremor is one of the symptoms that tends not to respond well to medication, alongside dyskinesia and stiffness of the muscles,” he says. For people who experience these symptoms, “DBS has a real role to play – and we can get a really good outcome.”

“I wanted to do something radical”

So how can you know if DBS is right for you, and when to take this step on your Parkinson’s journey? For Keyoumars, the answer is simple: “The time to think about DBS is when you consider your medical treatment no longer sufficient to give you the quality of life that you want.”

This resonates with Cathy: “It’s all about quality of life, when it comes down to it,” she says.

When her tremor became increasingly difficult to manage, having DBS was a way for Cathy to regain not only some of her motor skills, but also a sense of normality. “People don’t realise how much gets taken away from you,” she says. “I wanted to do something radical, to disrupt Parkinson’s as best I could.”

After deciding to have the surgery, one of the most important decisions for Cathy came in finding the right medical team. “There were some surgeons who I felt saw me as just a brain,” she says. “If I was going to have surgery where I would be lying awake for hours, it was important to me that I could relate to them.”

“It’s a long-term commitment,” agrees Keyoumars. “No matter how wonderfully the electrodes are placed, the outcome is not going to be as good as when you know you’re always looked at as a human being – rather than as brain that needs surgery.”

The pair agree that DBS is not to be taken lightly, and it may not be “the right path for everybody”, says Cathy. “It’s a life-changing step,” Keyoumars agrees.

“But I think the choice of DBS,” says Cathy, “is about waking up in the morning and having the option of Parkinson’s not being your first thought of the day.”

Ultimately, Cathy feels it’s crucial for people with Parkinson’s to be aware of their treatment options – and for healthcare professionals to recognise they are more than their condition. “Yes, we are patients,” she says. “But we’re also people. We have a story, and we have a history – and we have a future.”

This article and podcast episode are sponsored by Medtronic. The information in this article is given for information purposes only and does not represent an endorsement by Parkinson’s Europe of any particular treatments, products or companies. This article and podcast episode is not a substitute for advice from your doctor, pharmacist or other healthcare professional. Parkinson’s Life makes no representations or warranties of any kind, express or implied, about the completeness or accuracy of information provided.

‘Deciding to have DBS surgery’, the 10th episode of the multi-award-winning Parkinson’s life podcast, is available now on Apple Podcasts, SoundCloud, Spotify and Google Podcasts.

Please rate and review the episode to help others find us – and if you’d like to take part in future episodes, share feedback or offer ideas, get in touch at editor@parkinsonslife.eu.

It’s all about quality of life, when it comes down to it