The second episode of the new series of the award-winning Parkinson’s Life podcast, “Living with ‘advanced’ Parkinson’s disease”, is available now on Apple Podcasts, SoundCloud, Spotify and Google Podcasts. 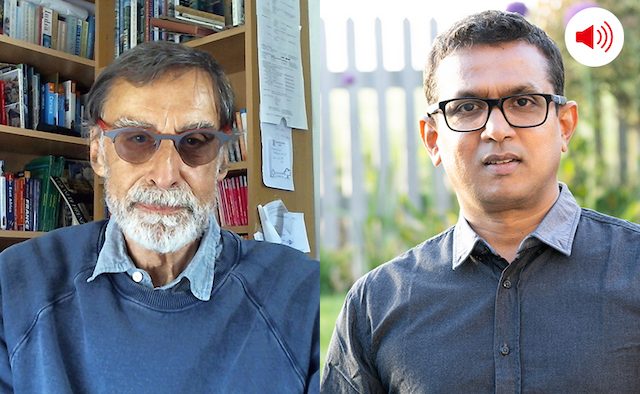 Colin Cheesman has had Parkinson’s for 20 years, but it didn’t stop him from taking up tap-dancing. In the latest episode of the Parkinson’s Life podcast, he discusses life at an ‘advanced’ stage of the condition with geriatrician Dr Nishantha Silva – from coping with changing symptoms to keeping a positive attitude when things are unpredictable

Colin Cheesman, a 74-year-old former local authority chief executive based in Chester, UK, has lived with Parkinson’s disease for the last 20 years. But, he says, it’s only in the last four or five years that more challenging symptoms have started to “kick in”.

“It has really given me a lot of problems, both psychologically and in the physical sense. Now I do have problems with balance, I’m dyskinetic, I have problems with gait. I have to be very careful about things like riding a bike and so on – which I love doing. And the treatments have got progressively more of a challenge to keep the condition under control.”

In the latest episode of the Parkinson’s Life podcast, initiated and funded by Britannia Pharmaceuticals, Colin shares his experience of reaching an ‘advanced’ stage of Parkinson’s – a term which generally refers to the point at which symptoms have a bigger impact on day-to-day life and medications may not be as effective.

It’s important not to feel disheartened as symptoms change and treatment regimens become more complex, explains Dr Nishantha Silva, who joins Colin in conversation. As a consultant geriatrician specialising in Parkinson’s, he’s been working with people with the condition for over a decade – and was motivated by the experiences of his own father, who had the condition.

“I really wanted to bust the myth we have that advanced Parkinson’s disease means that everything is at the end – it is not the case,” he says. “It is a different stage of the disease, which needs different approaches, different treatments and adjustments.”

Making the most of life with ‘advanced’ Parkinson’s

Colin says that thinking positively has made a huge impact on his quality of life since he’s been diagnosed. At the age of 70, he bought himself a pair of tap-dancing shoes and a set of rollerblades – although he admits he’s now giving up the rollerblading.

Nishantha describes Colin’s approach as “inspirational” – and says that it’s likely to make the patient and caregiver journey more manageable. “You should not just spiral down and think, ‘Oh my god, I have been diagnosed with Parkinson’s disease – end of the story,’” he explains. “No, take it as a challenge. There are many things you can do. It’s never too late to develop new hobbies, and new personal connections and to do different things.”

Message from our podcast sponsor:

The content of this podcast was up to date and accurate at the time of recording in June 2021. The views expressed in this episode represent the speakers’ own opinions and experiences. Speakers may express personal opinions that are not necessarily shared by Britannia Pharmaceuticals. Content from this episode has been reviewed by Britannia to ensure compliance with the ABPI and EFPIA Codes of Practice for the Pharmaceutical Industry.

This article and podcast episode is sponsored by Britannia Pharmaceuticals. All interviewees have received a donation for their time. The information in this article is given for information purposes only and does not represent an endorsement by the European Parkinson’s Disease Association of any particular treatments, products or companies. This article and podcast episode is not a substitute for advice from your doctor, pharmacist or other healthcare professional. Parkinson’s Life makes no representations or warranties of any kind, express or implied, about the completeness or accuracy of information provided.

“A space where people with Parkinson’s can speak their minds”

The second episode of the new series of the award-winning Parkinson’s Life podcast, “Living with ‘advanced’ Parkinson’s disease”, is available now on Apple Podcasts, SoundCloud, Spotify and Google Podcasts.