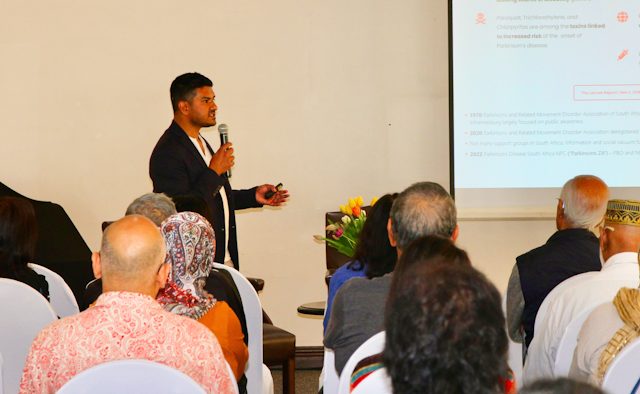 South Africa-based Rakesh Harribhai tells us about Parkinson’s ZA, a non-profit aimed at supporting people with the condition, and reflects on the rewards and challenges of his work within the Parkinson’s community in South Africa

Please tell us a bit about yourself and your involvement in the Parkinson’s community.

I am a chemical engineer by education and run a mining and metals advisory business out of Johannesburg, South Africa. I am a foodie, travel junkie and roadrunner.

My mum, who has now passed away, was diagnosed with Parkinson’s in 2005 and lived with the condition for some 17 years. I am now the founder of Parkinson’s Disease South Africa NPC (Parkinson’s ZA), a registered non-profit and public benefit organisation whose objective is to build a community for people impacted by Parkinson’s in South Africa.

What are the most pressing issues concerning Parkinson’s in South Africa?

Treatment of Parkinson’s in South Africa is one-dimensional, focused on medical management with little to no support available through allied healthcare such as physiotherapy, occupational therapy or speech therapy.

Further, a large portion of South Africa’s population is medically uninsured and reliant on the public healthcare system, which experiences regular shortfalls in the availability of Parkinson’s medications.

South Africa has several competing social priorities. As a result, neurodegenerative conditions are resigned to old age; there is simply no funding allocated to support people impacted by Parkinson’s.

Tell us about the launch and aims of your organisation, Parkinson’s Disease South Africa NPC (Parkinson’s ZA).

Our objective in the first instance is to create an ecosystem to support people impacted by Parkinson’s – those with the condition, caregivers and family members collectively.

We cut our cloth according to our coat. So, given funding constraints, we have opted to launch our organisation and multidisciplinary workshop – designed by the Parkinson’s and Movement Disorder Society (PDMDS) in India – in the East Coast metropolitan area of South Africa, with a view to replicate the workshop in other metros. So, our awareness campaigns are currently focused on the East Coast metro.

Please tell us about developing your relationship with local physiotherapists and occupational therapists. How have you seen this strengthen your work with Parkinson’s communities?

Unlike other countries, South Africa does not have a pluralistic approach to healthcare, where medical doctors work in close conjunction with allied healthcare. Our partnership with PDMDS is focused on a multidisciplinary workshop incorporating physiotherapy, occupational therapy and speech therapy.

Why is it so important to spread Parkinson’s awareness across the world and foster connections between organisations?

South Africa, and Africa at large, are still relatively behind the curve as it relates to Parkinson’s treatment and rehabilitation. Global collaboration helps us learn and leverage key developments from the rest of the world.

For example, our partnership with PDMDS leverages the parallels between India and South Africa by adopting a rudimentary approach. Similarly, we have connected with Parkinson’s UK and Parkinson’s Europe to leverage some of their awareness materials and learn from their fundraising initiatives.

What has been most rewarding and most challenging about your work in the Parkinson’s community in South Africa?

The response has been rewarding. People want to meet and connect and offer support to each other. Our workshops are offered free of charge. Our biggest challenge in sustaining and growing this initiative is funding.

What would you like to see the organisation achieve in the next five years?

I would like to have the PDMDS multidisciplinary workshop rolled out across at least three metros in South Africa. A simple appeal to the global community can help support and contribute to our success.

Rakesh Harribhai is the founder of Parkinson’s ZA, a non-profit and public benefit organisation whose main objective is to build a community for those impacted by Parkinson’s in South Africa. He became involved in the Parkinson’s community after his mother was diagnosed with the condition in 2005. He runs a mining and metals advisory business out of Johannesburg, South Africa.

For more information on living well with Parkinson’s, visit the Parkinson’s Europe website.

More than 500 people have completed the programme so far