I forgot my aches, pains, anxieties, weaknesses and limps and just got lost in my ‘happy place’ 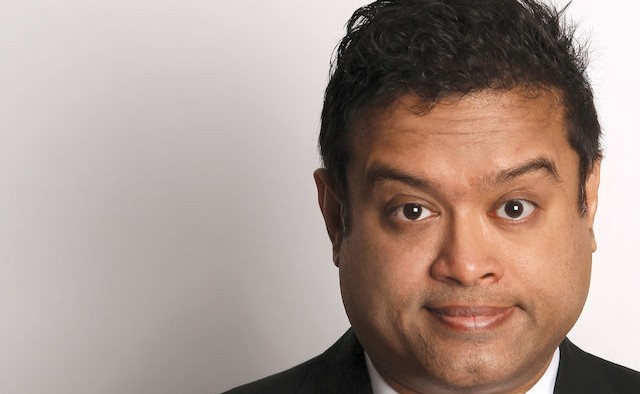 Paul Sinha, star of popular UK TV gameshow ‘The Chase’, has expressed anger on social media after headlines wrongly suggested he was “battling” depression after his recent Parkinson’s diagnosis

UK TV favourite Paul Sinha has refuted claims that he is “battling” depression due to his Parkinson’s.

The Mirror, a UK tabloid newspaper, changed a headline suggesting Sinha was depressed after the popular comedian criticised the story on social media.

I'm not battling "depression", and this headline is just wrong on many levels, not least for those with their own mental health issues https://t.co/vP0UWgeX0H

In a later tweet, Sinha – who was diagnosed this year at the age of 49 – said he didn’t want to be an excuse for “clickbait tabloid headlines”.

I have a blog. I don't post frequently, but what you will get is an accurate update on how things are for me. Because I'd like to be an honest, visible spokesperson, not an excuse for clickbait tabloid headlines. https://t.co/IaY2UxGM4A

Fans and people with Parkinson’s took to social media and praised Sinha, nicknamed ‘The Sinnerman’, after the misleading headline: 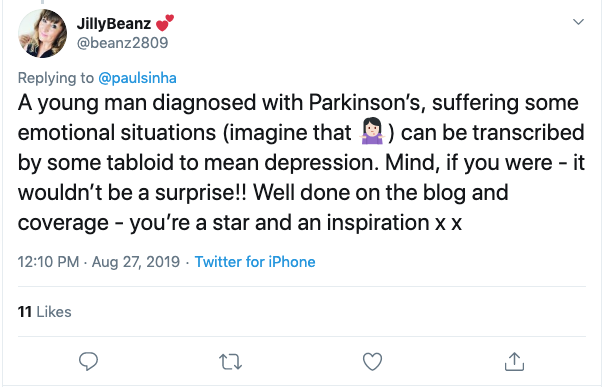 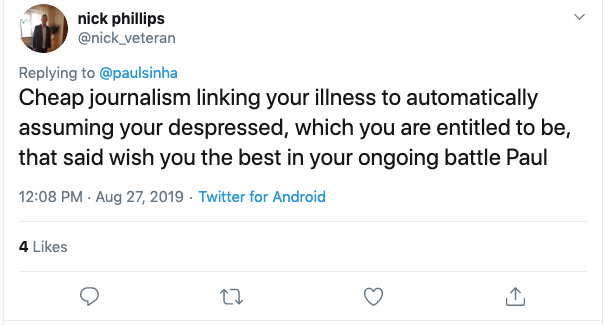 Others, like Twitter user Jonathan Moles, thanked him for openly sharing his Parkinson’s journey with the public: 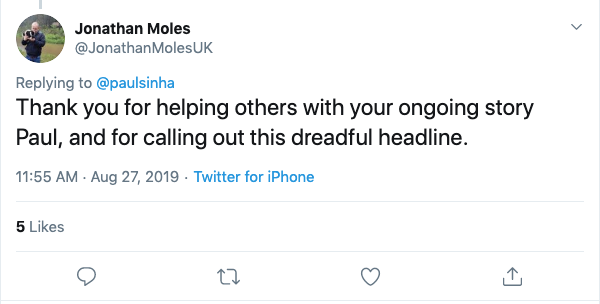 While Twitter user Janet Handley branded the assumption of depression as “unfair”:

“I got lost in my happy place”

On Sinha’s personal blog, he openly discusses his struggles with his Parkinson’s.

In one post, entitled ‘Stokes’, he shares how apathy – a common Parkinson’s symptom – affects his enjoyment of sport.

The post reveals, however, that England’s historic cricketing victory against Australia last week allowed him to forget “my aches, pains, anxieties, weaknesses and limps and get lost in my happy place. I was unconditionally excited”.

In a previous post from early August, Sinha reflects on what had been “something of a shutdown” in the weeks following his diagnosis. He also comments on the lack of sensitivity from those in the media reporting on his Parkinson’s.

“Although I reserve my right to be choosy, I’m comfortable for the public to follow my fight. I’d like to be an unofficial mascot for Living Your Life.”

I forgot my aches, pains, anxieties, weaknesses and limps and just got lost in my ‘happy place’