It will be a sporting tournament – no question – but it should also be a celebration of the Parkinson’s table tennis community, where everyone feels welcome and taken care of

“We want the feeling of togetherness to take centre stage” 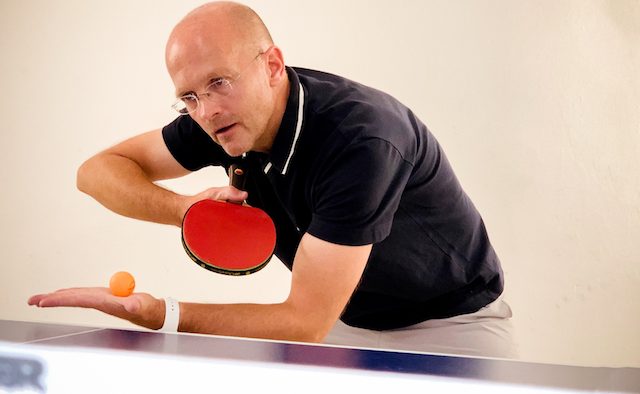 Serial entrepreneur Jens Greve was diagnosed with Parkinson’s disease at the age of 45 – and after extensive research, hit on table tennis as a way of improving his symptoms. He tells us about organising and sponsoring the second-ever ITTF Parkinson’s World Table Tennis Championships in Berlin, Germany, this September

Tell us a bit about your experience of Parkinson’s disease diagnosis. How did it lead you to table tennis?

I was diagnosed with Parkinson’s eight years ago. I largely withdrew from social life for almost two years – I studied the condition, read hundreds of studies and dozens of books, I tried an incredible number of therapies, travelled to China, Russia and Israel, and dealt intensely with my inner life. Retreat and study were my ways of dealing with this shocking news.

I also developed the Parkinson’s exercise app, YUVEDO. The app was not a great success because many patients hardly change their lifestyle in the first years of the condition, and in later years they might not have the strength to do so. But in the end I came to table tennis through the app, and ultimately became the organiser and host of the 2021 ITTF Parkinson’s World Table Tennis Championships with the non-profit YUVEDO Foundation.

Tell us how the Parkinson’s World Table Tennis Championships started.

The Croatian-American musician Nenad Bach had the idea for a PingPongParkinson movement and talked about it in 2017 with the International Table Tennis Federation Foundation (ITTF).

In the first World Championship, 63 players participated. The event was just wonderful, it had the magic of a very big premiere. This was the beginning of a wonderful movement, which in Germany, for example, has spawned over 30 locations where people with the condition can play.

The 2021 championships will take place from 9 to 11 September in Berlin. We expect a good 200 players.

Why is the championship so important for the Parkinson’s community?

We are putting a lot of emphasis on creating the conditions for a real sense of community, a feeling of togetherness and belonging.

It will be a sporting tournament – no question – but it should also be a celebration of the Parkinson’s table tennis community, where everyone feels welcome and taken care of.

The overriding idea is ‘one for all – all for one’. It means, ‘you are not alone, because there are many people affected by the condition’. It’s an honour to carry out such an event for our international community.

What do you think are the benefits of table tennis for people with Parkinson’s disease?

Table tennis is inexpensive, social and – if used correctly – therapeutically effective. The claim that table tennis can significantly reduce Parkinson’s symptoms or even slow the course of the condition is, according to our findings, scientifically untenable.

However, for me, this is of secondary importance because I am firmly convinced that table tennis is one of the best sports.

In all this, it is important that we train intentionally – specifically to improve our playing ability and possibly Parkinson’s symptoms. Then we can achieve the greatest success.

What are your hopes for this second world tournament?

We hope for participants from as many nations as possible – and for both exciting and fair competitions.

We also hope for as many spectators as possible on the final day. As an event with an international community who form one loud voice towards public awareness, this could become something that’s worth reporting in the media.

We want the feeling of togetherness to take centre stage, and for as many new contacts and friendships as possible to develop. We have planned wonderful evening events and a social programme for relatives of people with the condition so that connections can be made from that perspective as well.

What would you say to someone considering taking part?

Go for it! Take the chance to meet wonderful people and enjoy three days of exciting matches. Though everyone is unique, you are not alone in the challenges of Parkinson’s. We should concentrate on what unites us and not on what separates us.

To find out more about exercise and Parkinson’s disease, please visit the EPDA website.

It will be a sporting tournament – no question – but it should also be a celebration of the Parkinson’s table tennis community, where everyone feels welcome and taken care of

Tips to keep fit and stay active with Parkinson’s

We hear from neurologist and holistic advocate Dr Indu Subramanian