Parkinson’s is still very much considered an old person’s disease in Barbados, and the gravity of living with the condition is not really understood 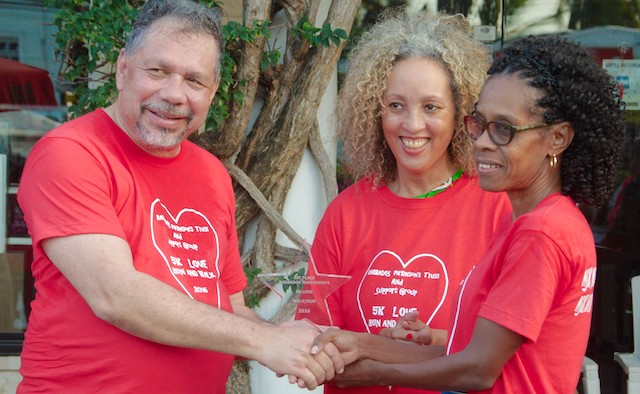 In the latest in our ‘In My Country’ series, we talk to Cherry Vogt-Ward (centre), the president of The Barbados Parkinson’s Trust and Support Group.

She shares how her team hopes to raise awareness about the condition through education, explains how celebrities like Michael J Fox have got people “asking questions” – and sheds light on the unique issues facing people with Parkinson’s in the Caribbean

I’m the founder of the Barbados Parkinson’s Trust and Support Group, based in Saint Peter, Barbados and was diagnosed with Parkinson’s 13 years ago at the age of 51. I’m lucky that my symptoms have been manageable so far and I know this is not the case for everyone with Parkinson’s.

In 2013, I volunteered at the World Parkinson Congress in Montreal, Canada. It was an incredibly moving and empowering event and was the impetus for me to establishing my own support group.

On my return to Barbados I approached the minister of health to enquire if there was any provision for people with Parkinson’s – there wasn’t, so two years later, in 2015, we kicked off the first Barbados Parkinson’s Awareness Walk.

The Barbados Parkinson’s Trust and Support Group (BPTSG) was born later that year and is run by a team of volunteers who support our 15 members by sharing resources and generally making them feel less alone. Our core goal as a charity is to raise awareness about we face in Barbados and throughout the Caribbean, and to offer support, comfort and friendship to those living with the disease.

We do this through various awareness events, which include our walks, runs and educational seminars. We’re also in the midst of planning an inter-Caribbean two-day seminar in 2020 – an exchange between medical professionals, caregivers and other Parkinson’s groups. We hope to open up the dialogue around the condition and create more of a Parkinson’s network within the Caribbean.

Parkinson’s is still very much considered an old person’s disease in Barbados, and the gravity of living with the condition is not really understood. However, as more media attention turns to celebrities with Parkinson’s like Michael J Fox, more people have began to ask important questions like: ‘is there a cure?’ and ‘What are the symptoms?’. This is the time when we should be more diligent about raising awareness.

Our focus for 2020 will be on targeting schools and educating children aged between 10-15 about Parkinson’s. We’ve been meeting with the Ministry of Education to get their input on the most effective way to address students, and we’ve also been working closely with the University of the West Indies whose attendees support us at events. 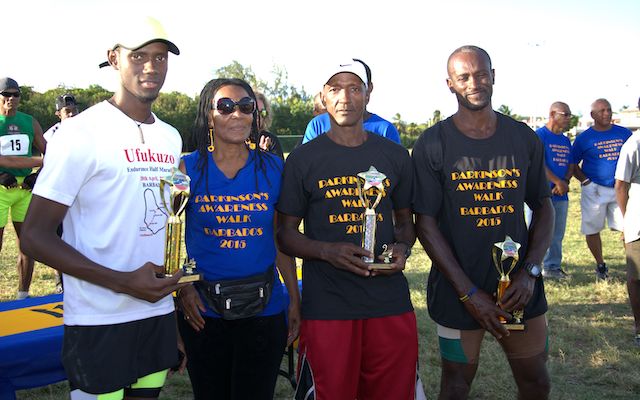 It’s been difficult to raise the profile of Parkinson’s here because it’s overshadowed by other conditions. There are currently just over 1,000 people with Parkinson’s in Barbados, but the majority of the attention, funding and healthcare provision is being devoted to other conditions. The Ministry of Health does help in some ways – in the past they have endorsed our proposals for awareness walks, made public service announcements about our upcoming events and generally encouraged more of an open discussion about Parkinson’s – but there is still work to be done.

Another issue facing people with Parkinson’s in Barbados is a lack of transport infrastructure. There are no daily public services provided by the state, only by private firms – meaning it’s expensive for people with Parkinson’s and their carers to pick up medication (which is often scarce in availability), attend appointments and get around on a day-to-day basis. We’re looking into getting a vehicle to help out members of BPTSG but it’s proving difficult as funds are quite limited – we’re still a foundation in its infancy.

In the future, what we really want to see is increased global cooperation and exchange in pursuit of raising awareness, finding a cure and tackling the stigma around the condition.

‘Tackling shame and loneliness in Italy’

Parkinson’s is still very much considered an old person’s disease in Barbados, and the gravity of living with the condition is not really understood

A roundup of Parkinson’s news stories in August