“There’s the home life Larry, there’s the work life Larry and there’s Parkinson’s Larry. I want them all to be one. So, for 2019 I’m trying to reprioritise my life and synchronise everything.” 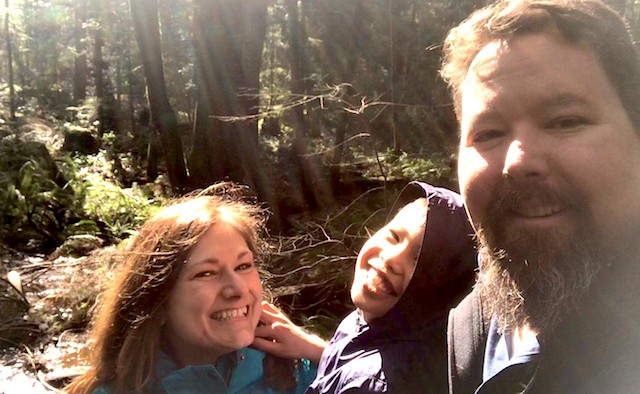 When Canada-based radio broadcaster Larry Gifford was diagnosed with Parkinson’s in 2017, he decided to use his platform to shine a light on the condition and launched his own podcast. We spoke to Larry about sharing his diagnosis with colleagues, explaining the condition to his nine-year-old son – and why he hopes Parkinson’s researchers go “out of business” soon

My name is Larry and I was diagnosed with Parkinson’s in August 2017. I’ve been married 20 years to my wife Rebecca and we have a nine-year-old son named Henry. I was born in Ohio, US, and I now live in Vancouver, Canada, where I work in radio.

I’ve been working in radio for the better part of 30 years and I’m now the programme director for two radio stations, CKNW radio and AM730 All Traffic – it’s the only all traffic radio station in the world. All we do is give you travel news.

Honestly, I didn’t. It’s one of those things where you’re like ‘wow’ and then you think ‘am I going to die?’. I’d heard of Michael J Fox, Muhammad Ali and maybe a few other people with the condition – but they were usually older folks. I’ve taken the time since then to learn as much as I can about it.

What were the first symptoms that you started experiencing?

My first symptoms were with my walk – I would drag, shuffle and clomp my feet, and I couldn’t find a rhythm. It became more pronounced over time. I also began to lose focus and have issues with long shifts on the radio. My voice would give out over time. I lost my sense of smell and started having trouble finding words.

Things slowed down, and it was my tremor that made me go to the doctor. I was leaning over the couch one day to hand my son a glass of water and my hand was shaking so greatly the water was spilling out.

How did you explain Parkinson’s to your son?

I think with children, you go as far as they want you to go. I let him ask questions whenever he wants to. Sometimes he doesn’t want to talk about it and sometimes he pulls me aside and says, ‘Dad I’ve got a question about Parkinson’s’.

He’ll ask questions like ‘are you dying?’ and ‘are you going to be alive when I’m 16?’. Those are always tough questions for a parent to hear because you don’t want your child to feel they’re going lose a parent at such a young age. The fear is not real – Parkinson’s is not going to take me out that quick.

How has the condition affected your career?

Significantly. When you’re a manager of media operations and you’re working with a lot of employees, coaching talent and creating company strategy – it’s hard to sit your boss down and say you have a degenerative brain disease. But they’ve been nothing but supportive the whole way. They’re pretty flexible at letting me adjust my schedule so that I can live with Parkinson’s and work with Parkinson’s.

On World Parkinson’s Day last year, I decided I wanted to share my story and wrote a piece for our website globalnews.ca. I was also interviewed on TV, and I created an audio documentary for radio.

The response was so great that we’ve now created our own podcast ‘When Life Gives You Parkinson’s’.

Why did you decide to launch your own podcast?

I was listening to a Michael J Fox podcast and there was a neurologist talking about Parkinson’s as a pandemic. They said that if people with Parkinson’s don’t share their stories then we will never find a cure. And so, I thought it would be a good idea not to just tell my story, but to give other people a platform to tell their story as well. For me, it was really important to use audio as a medium because I live in the audio world.

We launched it in September 2018 and Apple Podcasts named us one of the top podcasts of the year.

Why is it so important to speak up about Parkinson’s?

What I’ve found is that anytime you make yourself vulnerable and let people into your life and let them know that something is different about you – whether it’s Parkinson’s or something else – it’s scary. I didn’t know how people were going to react, but I’ve found nothing but support, love and gratitude.

Is there any aspect of Parkinson’s that you’re particularly passionate about?

Finding a way to integrate it into your life. I’ve realised that Parkinson’s is a frenemy of mine and it’s going to be a companion for my lifetime.

There’s the home life Larry, there’s the work life Larry and there’s Parkinson’s Larry. I want them all to be one. So, for 2019 I’m trying to reprioritise my life and synchronise everything.

Why is fundraising for Parkinson’s so important?

The search for the cure starts on the ground level in every community where you’re raising those dollars to put towards Parkinson’s research.

I think the awareness of Parkinson’s is so lacking. People don’t talk about it like they talk about other diseases even though there’s 10 million people in the world that have it. Being able to raise awareness of that across Canada and around the world has been really gratifying for me.

I hope that the researchers in Parkinson’s disease go out of business soon. That we find a cure and we can wipe our hands of it and move onto something else. That’s the goal.

“There’s the home life Larry, there’s the work life Larry and there’s Parkinson’s Larry. I want them all to be one. So, for 2019 I’m trying to reprioritise my life and synchronise everything.”