Just because you have Parkinson’s, you don’t have to give up 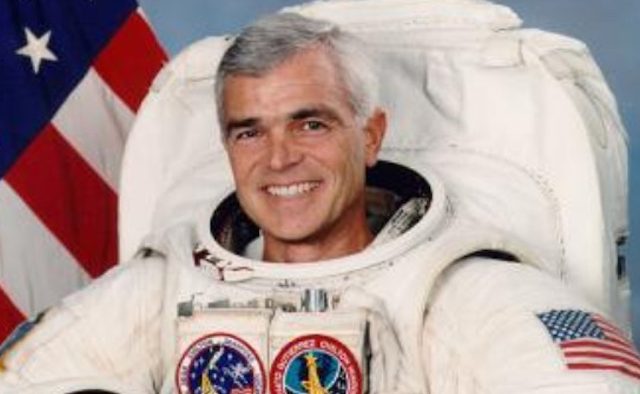 Former NASA astronaut Rich Clifford completed his third space shuttle journey after being diagnosed with Parkinson’s. Twenty-four years later, he shares memories of the mission, talks about his exposure to pesticides – and highlights why he decided to reveal his diagnosis

Journeying into space is an incredible feat – it’s even more impressive when you’ve been diagnosed with Parkinson’s.

Michael ‘Rich’ Clifford found out he had the condition in 1994. Two years later he undertook his third journey into space on the US Atlantis shuttle.

In webcast conversation with Dr Ray Dorsey, co-author of Ending Parkinson’s Disease: A Prescription for Action, the former astronaut outlined his experience working with US space agency NASA, spoke about his exposure to pesticides – and shared what his symptoms were like in space.

“It was an easy decision to fly”

“When I got diagnosed with Parkinson’s I thought it was over and NASA asked me what I wanted to do,” Clifford told Dorsey. “I said, ‘You mean it’s up to me?’ and they said, ‘Yeah, we consider you still qualified for flight.’ I said, ‘Well, I’ll go fly again.’ And it was as easy as that.”

“It was special, because I’d done a lot of preparatory work on that – all the EVA [Extra-Vehicular Activity] simulations and validation of the positions and equipment we were going to use – so it was an easy decision to fly.”

Asked if he noticed his Parkinson’s symptoms during the seven-day period in space, Clifford said: “I felt my right-hand tremor one time, but it was very mild… I think it showed more in space. I could feel it more. When we re-entered for landing, I noticed with the pull of g-forces, my hands would go down, and it was much easier to work with.”

Lifting heavy equipment, weighing over 150 pounds, was significantly easier: “I could have just dragged it along with my fingernails – it was neat. You’re superhuman up there.”

Growing up in Utah, US, Clifford had no family history of Parkinson’s. However, he told Dorsey, he was exposed to pesticides through a high-school job cutting grass and while working as a private pilot: “I didn’t know it was dangerous. I didn’t like the way it smelled, but it was just a job.”

Then, working as a gas station attendant Clifford encountered trichloroethylene (TCE) – another substance that has been linked with Parkinson’s.

“In the shop we would get grease spills all the way and would clean it up. I didn’t realise there was a nasty chemical in it, but it was efficient for cleaning up the grease. I did that for about three years.”

“We should be getting rid of these chemicals,” he told Dorsey, who has written about the impact of pesticides in his book. “It’s going to take somebody pushing it, like you are, to get this done.”

“Just because you have Parkinson’s, you don’t have to give up”

When he was first diagnosed, Clifford didn’t tell the rest of his crew that he had the condition. However, he decided to announce it publicly in 2011 – 17 years after his diagnosis – to “get the issue out on the table”.

“I thought it was time to reveal it. I felt it was a good thing for the community for me to announce I had Parkinson’s,” he said.

He was then encouraged by his doctor, whose son was a film producer, to share his story in a movie. ‘The Astronaut’s Secret’, a documentary released in 2014, covers Rich’s experience working with NASA while living with the condition.

Rich hopes his story inspires others with the condition: “Just because you have Parkinson’s, you don’t have to give up.”

Find out more about ‘Ending Parkinson’s Disease: A Prescription for Action’.

Just because you have Parkinson’s, you don’t have to give up

How do you deal with sexuality and intimacy in Parkinson's?