50 odd years ago we had a small beachhead called levodopa, but now the battle is on so many different fronts – everything from spinal cord stimulation through to non-invasive gene therapy. 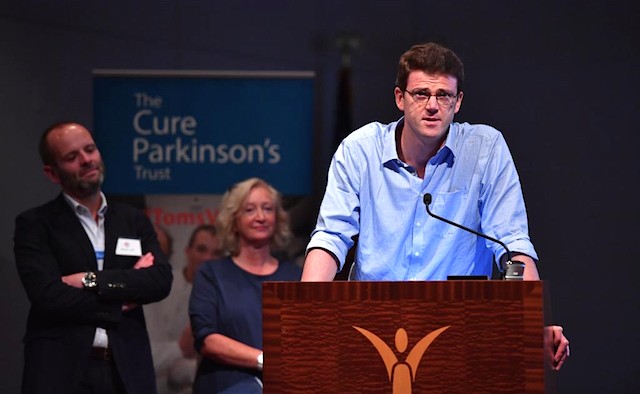 Dr Simon Stott, deputy director of research at The Cure Parkinson’s Trust and winner of the Tom Isaacs Award, looks back on his 15 year career working with Parkinson’s  – and explains why it’s such an exciting time for research

I am the deputy director of research at The Cure Parkinson’s Trust and I’ve been working in the field of Parkinson’s for over 15 years. I started off in New Zealand, where I worked for a biotech company called NeuronZ, researching compounds for neurodegenerative diseases.

I became interested in Parkinson’s because it seemed like the most solvable of the conditions we were studying.

How has your role changed since you first started?

For most of my career, I’ve worked as a research scientist. However, in the last four years, I have been doing clinical research as well – involving clinical trials and studies at the University of Cambridge. And now I work for The Cure Parkinson’s Trust.

What do you do in your role day-to-day?

The job has three priorities: research, grants and science communication.

I support the director of research in his efforts to progress what’s called the Linked Clinical Trials Initiative. That’s where we take drugs that are either readily available or coming to the clinic for various conditions – and we look at whether they could potentially have disease modifying effects for Parkinson’s. We do our best to get these drugs into clinical trials.

What excites you most about Parkinson’s research at the moment?

Just the sheer volume of it. There’s so much research coming down the pipeline. Every single day there’s a dozen to 20 new publications. I think there’s a general excitement within the community that some serious breakthroughs are on the horizon. 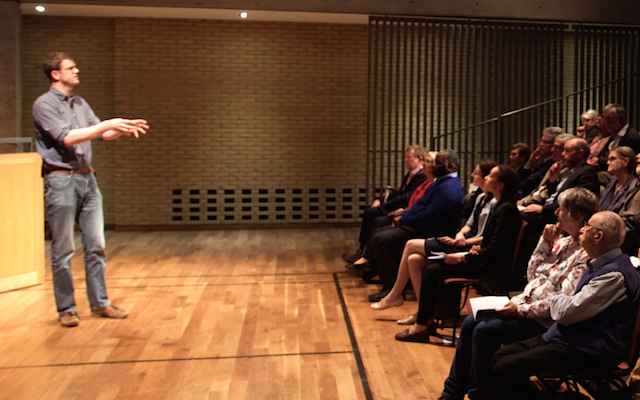 Can you tell me more about the ‘Science of Parkinson’s’ blog that you write?

When I first started working in a clinic, I was meeting individuals with a real thirst for information and they were looking anywhere and everywhere for anything they could find about Parkinson’s – and some of those were pretty dark places on the internet.

I thought there was a real opportunity to provide something for people with Parkinson’s, and that there’s a requirement for the research community to share information in a way that everyone can understand. I decided to have a crack at it myself and I’m really enjoying it.

I find it rewarding in the sense that I’m learning a lot on the way – my knowledge in the field has certainly increased since I started the blog. I also enjoy the creative aspect of it and a feel-good sense that you’re making a difference in the world for somebody.

Can you tell me more about the work you do at Parkinson’s support meetings?

I’m president of my local Parkinson’s UK support group in North Hertfordshire, UK, and I also give talks at other branches to discuss what research is being done.

I find a lot of people simply don’t know what’s happening in the world of research. They’re sitting and waiting for a cure to come along – and they think it’s still all about levodopa and dopamine antagonists. Quite often, they’re really surprised at the amount of research that’s going on.

What has been the highlight of your career?

This summer I was jointly awarded the Tom Isaacs Award with Professor Bastiaan Bloem from the Radboud University Medical Center in the Netherlands. The community votes for people who have made the biggest contribution in getting people involved in research that year. I was really touched to receive it – and the fact that the vote came from the community itself meant a lot.

What do you think the year ahead looks like for Parkinson’s research?

The year ahead looks very exciting. We’re going to have some very important results coming out soon and I think there’s a lot of technologies that are going to have a big impact on the research side of things.

What are your hopes for finding a cure?

A cure means different things for different people. If you’ve just been diagnosed, your idea of a cure is going to be very different to somebody who’s had the condition for 20 odd years.

I don’t think in the future we’re going to have a single silver bullet that provides a cure or remedy. A cure for Parkinson’s really requires three things. Number one, a disease halting mechanism. Number two, some form of neuroprotectant to protect the cells that remain – and to provide a nurturing environment for number three, which is some form of cell replacement therapy.

50 odd years ago we had a small beachhead called levodopa, but now the battle is on so many different fronts – everything from spinal cord stimulation through to non-invasive gene therapy.

How will ‘Brexit’ affect Parkinson’s research in the UK?

What next for Parkinson’s research funding after the UK leaves the EU?