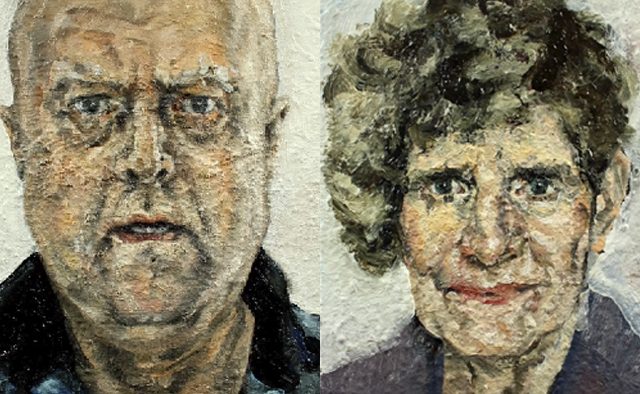 ‘Parkinson’s Portrayed’ is a series of films that combine animation, portraiture and sound to bring to life the stories of six people affected by Parkinson’s. We talk to the creators – Geraldine Peacock, who has had Parkinson’s for 32 years, and artist Ian Bruce – about the story behind the collaboration

How did ‘Parkinson’s Portrayed’ come about?

Ian: I came up with the idea after making a film called ‘Double Portrait’ (pictured above), which is about the poignant relationship between Geraldine and her partner, Bob. Having finished the film, I wanted to make something that was specifically depicting the condition that I only started to learn about through Geraldine. I realised that I was ignorant of the multiplicity of symptoms, both mental and physical, and was keen to know more.

Talk me through the process for creating each portrait. How did it all come together?

Ian: The basis of each of the animations is an edited interview with the participant describing their relationship with condition, from diagnosis to the present day.  The subjects are Alex Flynn, Shamsa Hussain, Paul Mayhew-Archer, Emma Lawton, Dennis Drakes and Bill Morrison. I created the films through time-lapse animation, where I paint the portraits in chronological order onto the same panel and take a photo between each brushstroke. I also add some frame-by-frame animation to the films. I use acrylic, as it dries quicker, but each four-minute film can take weeks, with the editing process being a condensing down of thousands of images into a clear timeline.

How did you decide on the six featured participants?

Ian: Geraldine helped me team up with Parkinson’s UK, and I asked them to put forward people from a variety of different ethnic and social backgrounds, to show that disease does not discriminate. They then recommended individuals with the condition who had particularly fascinating stories. I wanted to represent people whose stories were extraordinary and at times surprising. For example, Shamsa Hussain is one of very few women to have given birth with early onset Parkinson’s.

What effect do you think the narration has on the films?

Geraldine: I don’t think it would be much without the narration. It lets the person tell it as it is, without it being a direct interview. I think it’s less inhibiting that way, and participants talk more like themselves without holding back. As the person talks, their portrait becomes complete and you almost feel like you’re inside their thoughts.

How was the project received by the public? How did people with Parkinson’s respond?

Ian: The opening event for ‘Parkinson’s Portrayed’ was great. We had a big crowd of people with Parkinson’s and it was fantastic to hear their reaction to the project. Many people could relate to specific symptoms and the approaches adopted to deal with them. I’m really pleased that one of the films has been officially selected for The Aesthetica Short Film Festival, which is BAFTA recognised.

Geraldine: People with Parkinson’s were very positive about the project, finding the films very moving. It encourages you to look at the person, not the disease. People often assimilate the two, without realising they are doing so.

Has this project taught you anything about Parkinson’s?

Geraldine: I’ve met all of the people featured, and it made me admire them. They don’t just accept they have Parkinson’s, they’re not sat in an armchair with a blanket over them. They have made a life for themselves, however difficult it may have been. Realistically, you can’t fight it because there is no cure. But, these six people have shown resilience beyond the bounds of normal people, for something that is very frustrating and very painful.

Ian: The project has taught me a great deal about Parkinson’s. Tremors are a singular stereotype that the public associate with the condition, but I had no idea it could affect your memory, your moods, your ability to wake up from nightmares, your sense of smell, the list goes on. I think the most shocking element is how it fluctuates. Shamsa Hussian describes going from being a 33-year-old to an 83-year-old in a matter of minutes.

What is the main message that you hope people will take away from this project?

Ian: What I hope people will see is how in the face of unimaginable adversity, humans can find a way to turn things to their advantage. Paul Mayhew-Archer has worked as a comedy writer for years but never dared do stand-up until he got Parkinson’s – he said it gave him a perfect subject matter and a certain boldness to tell his story. Each of the subjects are a testament to the power of the human condition. I think we can all learn from what they say. It’s not until your entire life is turned upside down that you begin to appreciate and understand the power you have to change yourself and influence others in the process.

Geraldine: I don’t know anyone in the country who has had Parkinson’s longer than I have, I wish I did really. But the message I want people to know is that by the time people are 70 nowadays, a large proportion of people have Parkinson’s. It’s going to affect a lot of people, so it’s good to be interested in it. It could be you!

Credit for all media: Parkinson’s Portrayed

Ian is an artist specialising in portraiture and animation, and a singer in band called ‘The Correspondents’. He met Geraldine when she commissioned him to create something that would represent the relationship between herself and her partner, Bob. This became the short-film ‘Double Portrait’, winner of Best Animation at the Aesthetica Short Film Festival.

Geraldine has had Parkinson’s for 32 years, diagnosed at the age 39. When her partner Bob died, Geraldine told Parkinson’s UK that there was more to be shared about the reality of Parkinson’s than depicted in ‘Double Portrait’. So, herself and Ian reassembled to create ‘Parkinson’s Portrayed’.

For more information on Parkinson’s and creativity please visit the
EPDA website.