People note that specialised nutritional support, as well as an appropriate diet, empowers them to function as well as they are able to within the confines of Parkinson’s 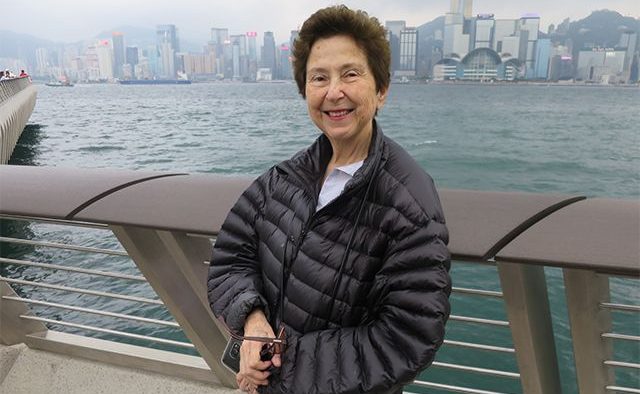 We talk to Parkinson’s author and nutritionist Lucille Leader about the important relationship between your diet and Parkinson’s, her personal connection to the condition – and why it’s not just a case of “drink this, eat that” when it comes to looking after your nutritional health

Hi Lucille, Happy New Year! Can you tell our readers a little about your career and your work with Parkinson’s?

Of course. I’m a nutritional therapist, author, university lecturer and have previously worked as nutrition director of The London Pain Relief and Nutritional Support Clinic at The Highgate Hospital, London, UK.

I’ve worked in nutrition for over two decades, and specifically concentrate on the nutritional support of Parkinson’s. I work clinically in collaboration with Dr Geoffrey Leader and we have written six books on Parkinson’s together. I have been a featured speaker at international Parkinson’s congresses and was awarded the Quality of Life in Parkinson’s Award. I am also a council member on the Food & Health Forum of the Royal Society of Medicine.

Why is it that Parkinson’s interests you so much?

Originally it came from a personal connection to the condition. A close friend of mine was diagnosed with Parkinson’s and I noticed that he’d started to lose a lot of weight. When discussing his weight loss with me, he explained that his medication worked far better when he did not eat around taking it.

As a researcher, I thought this was a fascinating topic and one that deserved investigation. So I approached one of the big manufacturers of levodopa and asked if their pharmacists would be interested in partnering to look into this. We found that we were able to manipulate my friend’s diet, and he was able to eat around his medication with no issues.

Can you explain the relationship between nutrition and dopamine?

Ok, so dopamine is the chemical messenger (neurotransmitter) formed in the brain that sends messages to the rest of the body to tell it how to move. Dopamine also develops into adrenaline (epinephrine) which we need to help us control our stress responses.

Dopamine is originally metabolised from protein in the diet, which is why diet and adequate digestion are so important.

How important do you think a good diet is for people living with Parkinson’s?

It is absolutely essential. A good diet helps with a whole host of challenges experienced by people living with Parkinson’s. Things like bowel function, cell energy and inflammation control.

Regulation of bowel function is essential and may be influenced by personalised nutritional protocols.

A tailored, specialised diet and the timing of eating specific foods in relation to the time of taking levodopa can also help people with Parkinson’s to better absorb their medications.

Dr Geoffrey Leader and I have written in detail about this method and also how to effectively monitor response to levodopa and report it to the doctor.  This is so that the best timing of taking levodopa, for each individual, can be advised.

There are also other vital benefits too. People with Parkinson’s often have difficulty swallowing so it is the responsibility of nutritionists to point them towards food which they will be able to safely process.

What advice would you give to someone who has been recently diagnosed with Parkinson’s and is interested in the nutritional side of support?

It’s really important to take professional advice from a registered nutritional therapist or dietician because it is very specialised – this is not just about maintaining an ordinary good diet.

Responsible nutritional support depends on the nutritional and medical status of cells and the clinical nutritionist needs to establish this with biochemical, laboratory tests and peer-reviewed research from the medical literature.

What sort of feedback do you get from people with Parkinson’s that you work with?

I think the main thing people talk about is a greater sense of wellbeing and improved bowel function. Some patients also report reduced dyskinesia.

People note that specialised nutritional support, as well as an appropriate diet, empowers them to function as well as they are able to within the confines of Parkinson’s.

What are you working on at the moment?

My research at the moment is very clinical, in that we are collecting large amounts of data on patients’ nutritional status.

This helps us look at the common cellular deficiencies within people with Parkinson’s which affect enzymes, general metabolism and functional health.

Eventually it will be published. In layman’s terms, what we want to observe is – on a biochemical level – what exactly is happening with people with Parkinson’s.

I do think there is a common misconception that surrounds nutritional therapists. It’s not just “take this, drink that” – we base our work on patients’ biochemical individuality and the scientific literature.

People note that specialised nutritional support, as well as an appropriate diet, empowers them to function as well as they are able to within the confines of Parkinson’s