When people with Parkinson's disease cannot be heard or understood, they withdraw from communication exchanges, leading to social isolation 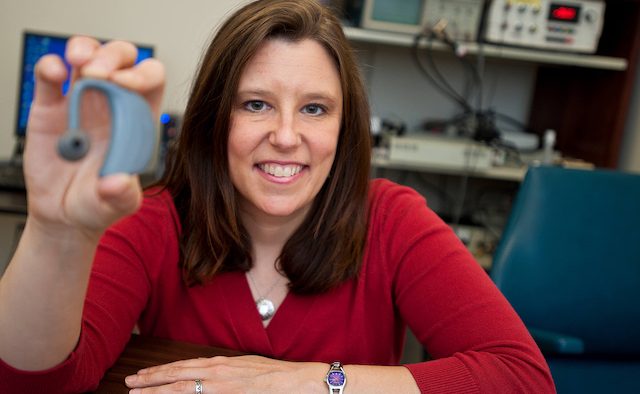 From an award-winning Parkinson’s documentary featuring Tom Isaacs to a new wearable device that helps improve speech, here are the top Parkinson’s stories from around the world this month

A two-part documentary ‘Parkinson’s Drug Trial: A Miracle Cure?’ has won the prestigious Grierson Award for Best Science Documentary. The series, which aired on UK TV channel BBC Two in February this year, is based on a medical trial testing a drug called glial cell-derived neurotrophic factor (GDNF).

Following the story of nine volunteers – including the late co-founder of The Cure Parkinson’s Trust, Tom Isaacs – the trial received global media attention. After the documentary’s success in The Grierson Awards, trial volunteer Vicki Dillon, said: “Hopefully it will help raise more awareness for our cause, which is to raise money for phase three of the trial, which would entail GDNF being tested on new patients.”

We caught up with three of the participants earlier this year to discuss their experience of the groundbreaking trial.

A new wearable medical device called SpeechVive uses a reflex to improve communication in people with Parkinson’s. The device plays a noise in the wearer’s ear as they talk which causes a reflex that results in louder, clearer and lower speech.

Jessica Huber, a professor at Purdue University, US, who created the device, said: “When people with Parkinson’s disease cannot be heard or understood, they withdraw from communication exchanges, leading to social isolation. This device makes it possible for patients to continue to communicate with their loved ones well into their disease.”

The device has so far helped over one million people with Parkinson’s in the US.

Video games can help people with Parkinson’s strengthen their limbs

Researchers in Spain have found that video games designed to improve upper limbs could aid rehabilitation for people with Parkinson’s.

The study – published in the ‘Journal of NeuroEngineering and Rehabilitation’ – assessed 23 people with Parkinson’s. The participants were divided into two groups – 11 people completed conventional physical therapy with a focus on their upper limbs, and the other 12 played video games designed by the researchers.

After six weeks, both groups showed improvements in their grip strength. However, the video games group saw a more significant improvement in their coordination and dexterity.

The researchers concluded:“Future studies are necessary to further research and verify the outcome of this tool and to determine whether there is an ideal patient type who may benefit more from these interventions.”

Does Parkinson’s start in the brain or the gut?

A Danish study – published in the ‘Journal of Parkinson’s Disease’ – hypothesises that Parkinson’s can originate in the gut and the brain.

In the study, researchers review the evidence that Lewy body disorders – including Parkinson’s – can be split into two categories. The condition can form in the gut and then spread to the brain, and form in the brain.

If the hypothesis is correct, says Van Den Berge, “a personalised treatment strategy will be required, and we need to be able to identify these subtypes of PD in the individual patient.”

US researchers have found a new network of genes connected to the development of Parkinson’s. They believe the discovery could improve the understanding of how Parkinson’s works and help identify new treatments.

As part of the study – published in scientific journal ‘Nature Communications – the team analysed large datasets from people with Parkinson’s to investigate how the gene networks involved in the condition interact with each other.

After comparing their findings with data of people without Parkinson’s, they were able to identify gene networks that had previously not been associated with the condition.

Zhenyu Yue, a senior leader in the study, said: “The work opens up a new avenue for studying the disease. The new genes we identified suggest that new pathways should be considered as potential targets for drug development, particularly for idiopathic [of unknown causes] Parkinson’s cases.”

When people with Parkinson's disease cannot be heard or understood, they withdraw from communication exchanges, leading to social isolation