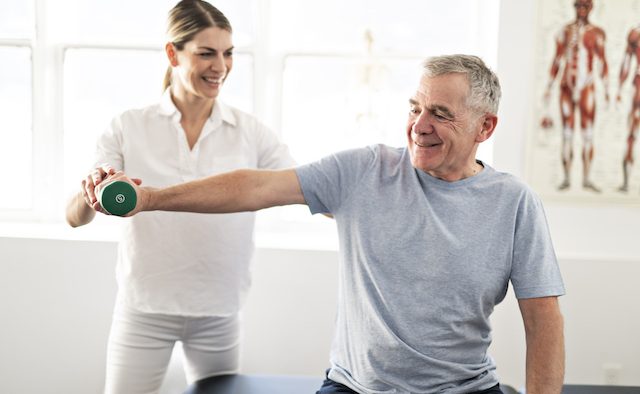 We round up April’s top news stories about Parkinson’s disease from around the world – from research into how a common household chemical may increase the risk of Parkinson’s, to a study on how wearable sensors could help clinicians track symptoms

A new study, conducted by researchers in South Korea, has investigated whether exercise can help prevent earlier cognitive decline in people with Parkinson’s who carry the gene variant APOE e4.

Of the 173 participants who took part in the study, 27% had APOE e4. The participants were asked to report their physical activity through a questionnaire, and had their thinking skills assessed at the start of the study and then one and two years later. The results showed that greater physical activity at the start of the study reduced the risk of APOE e4-related cognitive decline.

Jin-Sun Jun, study author and a professor at Hallym University, South Korea, said: “Problems with thinking skills and memory can have a negative impact on people’s quality of life and ability to function, so it’s exciting that increasing physical activity could have the potential to delay or prevent cognitive decline.”

Researchers believe trichloroethylene (TCE), a common chemical used in dry-cleaning and household products, could be causing rates of Parkinson’s disease to increase.

In the last 10 years, the number of people with Parkinson’s in the US has increased by 35% and Dr Ray Dorsey, a neurologist at the University of Rochester Medical Center, US, says the figure is expected to double again over the next 25 years.

Studies have found that exposure to TCE can cause some people to become sick quickly, while others may go decades before developing symptoms of Parkinson’s. While the use of TCE is banned in the EU, the Environmental Protection Agency estimates that 250m lb of the chemical is used annually in the US.

In an interview with Parkinson’s Life in 2020, Dr Dorsey shared his surprise at the extent of the risk of TCE: “I knew about the link between pesticides and Parkinson’s, but I did not know the extent of the evidence, and the strength of the relationship between them. I also didn’t know that chemicals like TCE are the most common contaminant of water found underground and contaminate thousands of sites around the US – including one 15 minutes from my home in suburban Rochester, New York.”

Scientists at EPFL, a research institute and university in Switzerland, have investigated how wearable sensors could help clinicians monitor the progression of Parkinson’s.

The scientists set out to analyse gait speed – how fast people can walk – in people with the condition. The EPFL team partnered with the Centro Hospitalar Universitário do Porto in Portugal to recruit 27 people with Parkinson’s.

In the study, each participant was given a foot-worn sensor that recorded how fast they walked. They were asked to walk for 20 metres in a straight line and to walk in a circle five times. The tests were repeated both when patients were on motor symptom-treating medication, and off medication. The scientists then asked the participants to wear the sensors at home for one day, performing their usual daily activities.

On average, they found that patients had the same walking speed in the clinic and at home. They also found that some patients walked even faster between 30 minutes and three hours after taking medication.

For almost half a century, doctors have recognised that people with Parkinson’s disease are more likely to develop melanoma – a type of skin cancer. Now, researchers have found a molecular link between the two conditions.

As part of the study, a team at the National Heart, Lung and Blood Institute (NHLBI) in the US used imaging and protein detection techniques to examine two proteins – alpha-synuclein and Pmel – which are involved in Parkinson’s and melanoma cells.

The results showed that the two proteins are present in the same place in human melanoma cells – and investigated if the proteins could interact. The researchers also observed that loss of skin pigmentation in people with Parkinson’s could contribute to an increased risk of melanoma.

Dexter Dean, a postdoctoral fellow at NHLBI, said: “I think we’re just at the tip of the iceberg of appreciating what α-synuclein might be doing in melanoma.”

Researchers in Italy have found that an intensive hospital rehabilitation programme can have short-term improvements in the functional and cognitive abilities of people with Parkinson’s disease.

The research team examined records for 24 patients who had mild to moderate or severe Parkinson’s. This was determined using the Movement Disorder Society Unified Parkinson’s Disease Rating Scale.

The patients stayed in hospital and engaged in an individually tailored programme – including physical, cognitive and speech therapies – for six weeks.

“Our findings strengthen the evidence about the efficacy of an inpatient multidisciplinary rehabilitation treatment,” the study authors concluded, but added that more research is needed to assess if sessions given for a longer period of time could have more lasting benefits.