I felt this very familiar grief rise up from deep, deep within me 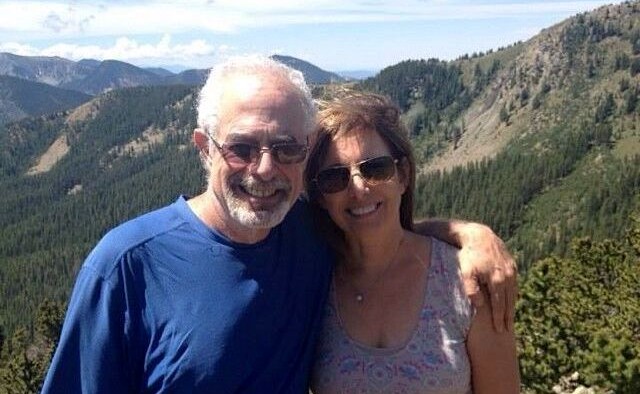 To mark World Poetry Day, Catherine Strisik – winner of Parkinson Life’s 2019 poetry competition – shares how writing poetry helped her to grieve for her husband and why she wouldn’t let Parkinson’s take away the man she fell in love with

We are delighted to announce that the winner of our Parkinson’s poetry competition is Catherine Strisik for her poem ‘Circular Green Metal Hairbrush with Missing Bristles and Worn Rubber Handle’ – an honest and moving depiction of Parkinson’s, her marriage and grief.

Catherine Strisik, who is a writer and editor based in New Mexico, US, wrote her winning poem while mourning the death of her husband Larry, who had lived with Parkinson’s for seven years.

Catherine spoke to us about the challenges of caring for someone with Parkinson’s, her advice for fellow Parkinson’s carers – and how it feels to be the winner of the first ever Parkinson’s Life poetry competition.

Congratulations Catherine, you have won! How does it feel?

Very emotional. When I found out, I felt this very familiar grief rise up from deep, deep within me. I burst into tears.

This poem means more to me now as I have some distance from the situation. I read it and I love it, and I remember that moment of finding his hairbrush so clearly.

How long after your husband’s death did you write your poem?

I wrote it two months after, I had been cleaning when I found his green hairbrush in a drawer. This poem came to me, and it represents my grief in writing. I thought the use of couplets was appropriate, because it is about a relationship. I decided to take it to a writing workshop to share. All I could do, at this point, was read my poem because I was too emotional. I wasn’t able to speak to anyone or respond to anyone’s work.

What was your experience of caring for someone with Parkinson’s?

I remember we were walking on the beach and I noticed Larry’s arm wasn’t swinging when he was walking. It took all my courage to say that to him, but he brushed it off. He was a physician and he had patients with Parkinson’s. It wasn’t until a year later that he finally went to a neurologist. That was the moment he began disappearing. Emotionally it was too much for him because he knew what the future was going to be.

First of all, he didn’t want anyone to know. For the first three years we kept it secret, which was easier as the disease wasn’t too evident at this point. When he started having complications with his medication, real crazy side-effects, it was an eye opening moment.

In a marriage you work hard. I was always his best cheerleader and it remained that way more or less until the last year. In the last six months there were some cognitive changes, with perception more than anything else. He was a brilliant man, so to see him confused, and confused about what was happening with us in particular, was not easy at all.

We travelled a lot together over the years. On our 21st anniversary we went to Italy and it was beautiful. When he was at home, near the very end, I held up a photo of us in Venice and he wept. That was amazing because he had been so unresponsive, but in that moment his awareness was still there.

Larry always enjoyed writing, and when he retired I sent him out the door and told him to start writing his stories. Days before his stroke he had finished a book he had been working on. It was a collection of essays called ‘A Life Well Worn’, and he had actually met with a publisher who was interested in it. After Larry passed away, I edited it and published it for him.

You’ve said your book ‘The Mistress’ was heavily impacted by your husband’s condition – in what way?

It is a book of poetry about the experience of Parkinson’s. The title is the personification of Parkinson’s disease because while I was writing, my friend reviewed the book and said it sounded as if a person was taking away my husband. To me, that made Parkinson’s a type of mistress.

The book is written in different voices: the mistress, the wife, the husband and Mount Kilimanjaro. In the months leading up to Larry’s death, I kept a journal about his Parkinson’s journey. I marked everything from his medication, his mania, his depression, and later I used that material to refer back to for my book. The poem I submitted for this competition wasn’t quite the right tone for the book, so I didn’t include it.

What advice would you give to any fellow Parkinson’s carers?

You have to find ways to keep in normal sync with your own life – which I did as a writer – and have a tremendous support system for yourself. Don’t forget that even though the person is changing, they are the person you fell in love with. Just keep looking at that person and reminding them of who they are.

He used the brush daily, beginning in the early mornings balancing
at the sink after applying some goop for unruly curly hair I’d bought

for him. With his right hand he’d pick up the brush tremulously stroke back
his hair while looking in the mirror. The brush an extension of the hand of the arm

the shoulder neck of the face the eyes of the brain. To brush.  For him to look good
for the day for me. Can I write this soon that I found the circular green

metal hairbrush with missing bristles and worn rubber handle in his bottom drawer with his Viagra and electric razor? Embedded into the old green hairbrush in

between the bristles, soft white hair, how quiet the house, the hairbrush
all I have of him now that carries his scent, that when I raise it to my nostrils, my

I felt this very familiar grief rise up from deep, deep within me

Try this deliciously rich chilli con carne – without the 'carne'