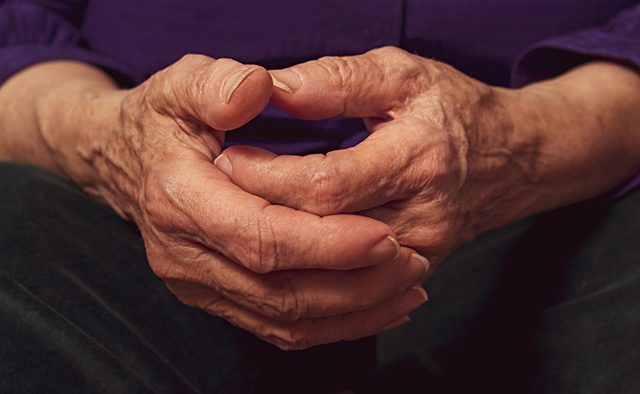 We round up some of this month’s Parkinson’s disease news stories from around the world – including a study exploring whether a skin test could support diagnosis, and research into cognitive problems at later stages of the condition

Interlocking finger test: a new way to detect dementia in people with Parkinson’s?

Researchers in Germany have investigated whether a modified version of the ‘interlocking finger test’ (ILFT) – a bedside cognitive test that assesses hand movements – could be used to detect dementia in people with Parkinson’s.

The ILFT, which aims to highlight how well patients can mimic four hand gestures, was updated to include a fifth test to improve the flexibility of the assessment. The modified test was used to evaluate 47 people with Parkinson’s.

The findings suggested there were “significant correlations” between ILFT scores and cognition, memory, attention and age among people with Parkinson’s.

Signs of frozen gait most evident in people making turns

Researchers in Busan, Korea have investigated whether freezing of gait (FOG) – a Parkinson’s symptom that causes sudden difficulty walking – is most noticeable when people are turning or walking in a circle.

The study examined 63 people with the condition – 28 who experience FOG and 35 who don’t – while 14 healthy adults served as the control group. When they were tasked with walking forward, no significant differences were found between patients with and without FOG. However, when the participants were tasked with walking backwards and completing 360-degree circular turns, the researchers found key differences between the two groups – including the shape created when turning, and the amount of time taken to do so.

Cognitive problems common among people in later stages of Parkinson’s

New findings have suggested that cognitive difficulties, such as challenges with memory, are common among people in the later stages of Parkinson’s.

As part of their research, scientists in Portugal conducted neurological assessments of 84 people living at a later stage of the condition. Testing participants for the presence of dementia – thinking and memory problems that impact day-to-day life – the researchers found that “memory was the most frequently impaired cognitive impairment, with a strong contribution of attention deficit”.

They noted that these problems varied from person to person, and further studies are needed to understand the nuances of later-stage Parkinson’s.

Could cholesterol-lowering drugs reduce the risk of Parkinson’s?

A study from the US has explored whether statins – drugs that lower cholesterol – could help to reduce the risk of Parkinson’s.

Conducted by experts at the American Academy of Neurology, US, the study analysed data from 3,000 people with an average age of 76, over a period of six years. The findings showed that those who took the cholesterol-lowering drugs were on average 16% less likely to develop symptoms of Parkinson’s, such as shaking and stiffness.

Reflecting on the study results, lead author Dr Shahram Oveisgharan said: “Statins could be a therapeutic option in the future to help reduce the effects of Parkinsonism in older adults.”

According to new findings from scientists in Italy, the protein alpha-synuclein may be useful in identifying and diagnosing Parkinson’s. How? Through the skin.

Researchers performed skin biopsies on participants with Parkinson’s – as well as participants with other neurodegenerative conditions and healthy individuals – to study alpha-synuclein build-up in the nerves. They found that higher levels of the protein were found in people with the conditionsuggesting that “detection of skin alpha-synuclein deposits” may support the diagnosis of Parkinson’s.

Exploring the link between pandemics, viruses and the condition