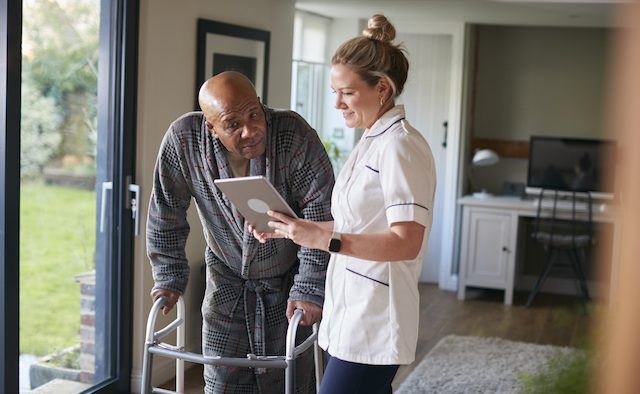 A team of researchers at Northumbria University, UK, are developing a new approach to targeting and treating walking problems in people living with Parkinson’s disease.

Funded by a Clinical Research Award from US non-profit Parkinson’s Foundation, the study will use state-of-the-art digital technology to measure changes in walking and brain activity in participants with the condition. The study aims to establish why existing physiotherapy strategies can improve walking in people with Parkinson’s – and who benefits most from these treatments.

Dr Sam Stuart, a senior researcher at the university, said: “By activating specific brain regions, and analysing brain activity in response to these physiotherapy strategies using the latest digital technology, our aim in this study is to see a change in patients’ response at different stages of Parkinson’s disease.

“The physiotherapy strategies we currently provide for patients with Parkinson’s don’t work for everybody. It’s a bit trial and error so we need more targeted and personalised interventions if we’re going to see a real improvement in walking ability among patients. By developing a better understanding of why these strategies work, we can also develop more effective interventions in the future to further improve walking.”

Researchers have found a link between visual hallucinations in people with Parkinson’s disease and the thinning of the inner retina in the eye.

As part of the study – published in research journal Scientific Reports – researchers analysed clinical and demographic data from 40 people with Parkinson’s disease, all of whom were over 50 years old and had had the condition for at least three years. Participants were assessed using the cognitive screening tool Montreal Cognitive Assessment (MoCA) and through interviews with neurologists.

Scottish comedian Billy Connolly, who revealed his Parkinson’s disease diagnosis in 2013, has opened up about living with the condition in a new documentary.

He added: “I’ve done my stand-up. I did it for 50 years. I did it quite well. And it is time to stop. My illness, my Parkinson’s disease, has rendered me different. It would either mean renewing what I do and doing something else, or give up what I did and that’s what I’ve done.”

Data from a population-based study in Taiwan has found that people with Parkinson’s disease are almost twice as likely to die by suicide.

As part of the study – reported in research journal JAMA Psychiatry – researchers compared the number of suicides in a group of 35,891 people with Parkinson’s disease and 143,557 people without the condition over a period of 11 years. Scientists considered markers including socioeconomic status and the presence of other mental health conditions, and suggested that Parkinson’s disease was independently linked to an increased risk of suicide.

The researchers concluded: “Integrating mental health care into primary care and Parkinson’s disease specialty care, along with socioenvironmental interventions, may help decrease the risk of suicide in patients with Parkinson’s disease.”

A toxic build-up of the protein alpha-synuclein within dopamine-producing nerve cells occurs in people with Parkinson’s disease.

In a new study using rats, scientists at the University of Pittsburgh, US, have found that production of the protein TOM20 can rescue these damaged nerve cells . As part of their research, the scientists injected rats with an adeno-associated virus-2 (AAV2) – which overproduces the TOM20 protein – directly into the area of the brain most affected in Parkinson’s disease.

The researchers concluded that the interaction between the two proteins, TOM20 and alpha-synuclein, “is sufficient to rescue dopaminergic neurons in the adult rat brain” and “may represent an important target for therapeutic intervention” in Parkinson’s disease.