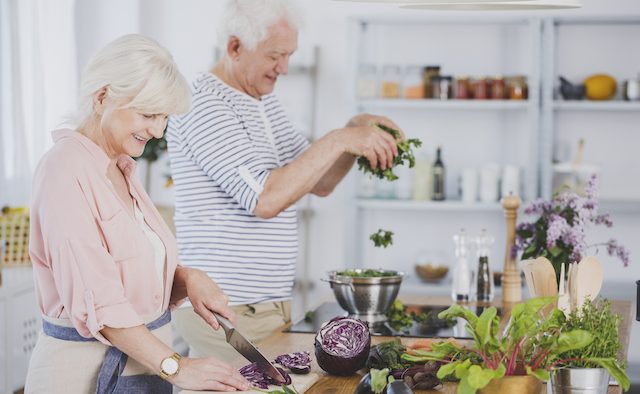 Can a healthy diet reduce risk of Parkinson’s?

Researchers in the US have suggested that people who have a healthier diet have fewer preceding symptoms of Parkinson’s. Parkinson’s is often preceded by non-motor symptoms such as constipation, daytime sleepiness, and depression.

As part of the study, the researchers monitored the diet and symptoms of almost 50,000 people every four years from the 1980s. The study revealed that individuals who mostly ate according to the alternate Mediterranean diet or the Alternative Healthy Eating Index – which encourage eating fruit, vegetables, whole grains, legumes and nuts and discourage eating red meat – reported fewer symptoms than those with the least adherence to that way of eating. People with healthier eating habits were 33% less likely to have three or more symptoms than those in the lowest group.

Samantha Molsberry, an expert from Harvard University, US, who authored the study, said: “While this study does not show cause and effect, it certainly provides yet another reason for getting more vegetables, nuts and legumes in your diet. More research is needed to determine whether eating a healthy diet could delay or even prevent the development of Parkinson’s disease among people who have these preceding symptoms already.”

Concussion linked with 57% higher risk of Parkinson’s in study

A study has revealed that people who have suffered a concussion are more likely to develop neurological conditions like Parkinson’s.

Researchers analysed data from the Manitoba Population Research Data Repository in Canada and found that people who have suffered a concussion had a 57% increased risk of developing Parkinson’s. Having had three concussions or similar injuries more than doubled the risk of Parkinson’s.

The researchers reported that while “the findings from this study demonstrate an association between the occurrence of concussion and an increased risk of diagnosis”, future studies with larger data sets are needed to further explore the relationship.

Tinnitus may warn of increased risk for Parkinson’s

A recent study suggests that tinnitus, where someone feels they can hear a sound without any external source, might precede the development of Parkinson’s and Alzheimer’s.

As a result of this study, researchers discovered several other independent potential risk factors for Parkinson’s, including head injuries, osteoarthritis and disorders that affect the blood vessels and blood supply to the brain.

The researchers concluded that “this information is critical for clinicians to develop preventive and diagnostic strategies for assessment” moving forward.

For the first time, scientists at the University of Bath, UK, have identified four potentially toxic structures formed by alpha-synuclein – a protein that clumps together and destroys dopamine-producing nerve cells in people with Parkinson’s

This research is fundamental in understanding which forms of the protein are dangerous and allowing scientists to develop drugs that target those structures specifically to slow the development of Parkinson’s.

Dr Beckie Port, research manager at Parkinson’s UK, said: “By advancing our understanding of the different structures of the protein that are likely to be present inside brain cells, this study helps pave the way for developing treatments that may one day stop the progression of Parkinson’s.”

A new study has found that the protein TET2 may contribute to the loss of brain cells in Parkinson’s, but that ‘switching off’ the activation of this protein could protect the brain from further damage.

As part of the study, researchers at the Van Andel Institute in the US examined tissue from the Parkinson’s UK Brain Bank and detected an overactivity of TET2 in people with Parkinson’s. The study showed that reducing the activity of this protein in mice protected the brain from inflammation and subsequent degeneration that is a feature of Parkinson’s.

Dr Katherine Fletcher, research communications officer at Parkinson’s UK, said: “This is a pioneering study that has uncovered knowledge that could pave the way for new treatments to protect against the loss of brain cells in Parkinson’s.”

Viviane Labrie, the senior author of the study, added: “If we can find a way to protect critical brain cells from Parkinson’s-related damage early on, we could potentially delay or even prevent symptom onset.”