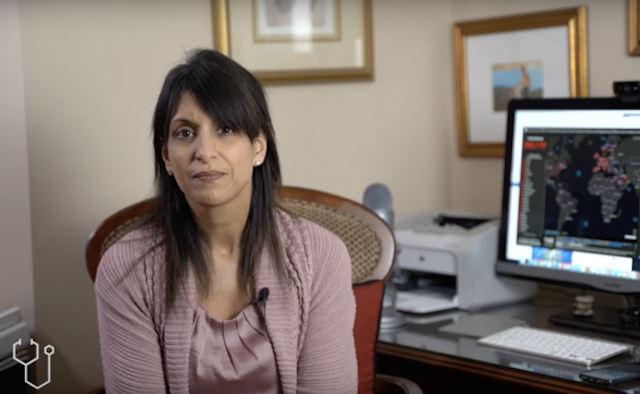 Soania Mathur, a physician with young onset Parkinson’s, shared a video on her YouTube channel ‘Unshakeable MD’, giving advice on what people with Parkinson’s need to know about the coronavirus pandemic.

The physician shared tips on how to prepare for self-isolation, attending doctor’s appointments, improving wellbeing – and more.

Dr Mathur said: “Enlist help from family and friends, or think about a meal delivery service that might keep you at home, safe and still getting the help that you need.”

She added: “Maintain your self-care routine and you will be far better able to cope with both isolation and your general wellbeing.”

Study finds that people with Parkinson’s have more vision problems

Researchers from Radboud University Medical Centre in the Netherlands have found that there is a higher rate of vision problems in people with Parkinson’s.

As part of the study, 1,098 people – 848 of whom had Parkinson’s for an average of seven years – completed a ‘Visual Impairment in Parkinson’s Disease Questionnaire’. The results showed that 82% of participants with Parkinson’s reported ophthalmologic (eye-related) symptoms.

Carlijn Borm, MD and study author, said: “People with Parkinson’s who express that they have eye problems should be referred to a specialist for further evaluation.

“For those who do not express such problems, using a questionnaire to screen for problems that may otherwise be missed might allow for recognition, timely treatment and improving the quality of life.”

In an interview with the BBC, UK Sky Sports presenter Dave Clark discussed how his father hid his Parkinson’s from the world– including his family – in fear of losing his job.

Clark, who was diagnosed with Parkinson’s in 2011, said: “He went to the doctors by himself, didn’t eat with the family because he was worried about his shakes. He didn’t tell anyone he had Parkinson’s, including me.”

Clark’s father, Alan, took his own life at the age of 52. Determined to deal with the condition in a different way to his father, Clark shared his top tips on living with Parkinson’s – from playing music in the house to living in the moment.

The Michael J Fox Foundation has granted Danish pharmaceutical company Lundbeck USD $197,000 to assist their research on how to diagnose Parkinson’s in a more efficient way.

The grant will be used to validate a test that uses cerebrospinal fluid, which is found in the brain and spinal cord, and help speed up initial treatment. The test is known as a biomarker assay – a clinical tool used to measure substances in the human body.

Results of the study will be shared with the pharmaceutical industry, academics and Parkinson’s community.

The European Federation of Neurological Associations(EFNA), an association supporting neurology patient groups, is providing grants to ensure access to treatment, services and support for neurology patients and carers.

The EFNA’s #BrainLifeGoals campaign aims to raise awareness of the impact of neurological diseases by sharing the aspirations of those living with a brain disorder – and is accepting applications from organisations for up to 10 grants of EUR €3,000.

Donna Walsh, EFNA executive director, said: “Access to treatment is one of the central #BrainLifeGoals of many neurology patients, and we want to help make that a reality across Europe!”

The deadline for applications is 1 May 2020.

US biotech company Neurolixis, has been researching the effect of the drug NLX-112 on dyskinesia, a common side effect in people with Parkinson’s.

Research by Neurolixis – funded by Parkinson’s UK – identified around half of all people with Parkinson’s experience dyskinesia after five years of taking levodopa-based medications. The study – published in Neuropharmacology– found that NLX-112 successfully reduced dyskinesia without reducing the effectiveness of levodopa.

Dr Arthur Roach, director of research at Parkinson’s UK, said: “This promising research on NLX-112 offers hope that we can find a treatment that can tackle dyskinesia, which can make everyday tasks, such as eating, writing and walking, extremely difficult.

“People with Parkinson’s tell us it is one of the most critical issues that impacts quality of life so we’re delighted that this project is progressing so positively.”