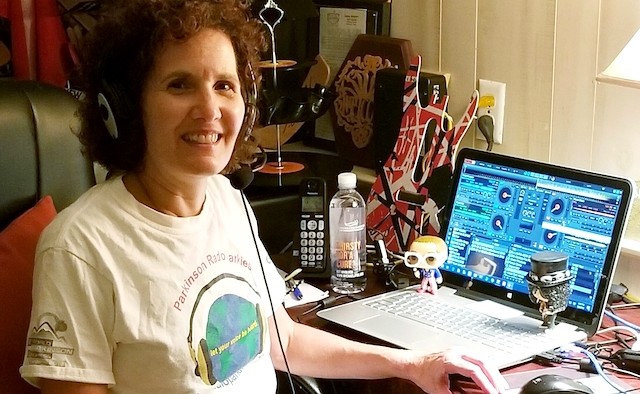 Laura Hanf – who was diagnosed with Parkinson’s in 2010 – is a DJ on Radio Parkies, the only online radio station dedicated to the international Parkinson’s community.

She tells us about the joy of connecting with fellow Parkies over the airwaves, the ways music and lyrics move her – and how she overcomes her symptoms while on air

Hi Laura. Tell us a bit about yourself.

Did your diagnosis come as a shock?

Not really. One day my hand began to shake on the steering wheel while driving. At first, I put it down to being cold or driving over a pothole in the road. I eventually borrowed Michael J Fox’s book ‘Lucky Man’ from the library. I read it and I just knew, ‘I’ve got Parkinson’s’. I was officially diagnosed in May 2010.

I told my immediate family but no one else as I was still working, I tried to hide my tremor by always holding a pen or fiddling with books. I was really worried I’d lose my job. Looking back, I realise how stressful that was. I don’t know why I did that! When I eventually ‘came out’ to my colleagues I felt such relief. I had to stop working not long after because I grew too fatigued to drive myself to work.

A man called Jean-Paul de Cremer came up with the idea for it. He was retired because of his Parkinson’s, and decided he wanted to do something with his time and raise awareness of the condition. He started out with three DJs with Parkinson’s – and that number has grown to almost 20 internationally.

We broadcast once a week – twice a week if we’re feeling lively. One of the DJ’s, DJ Madonna, reached out to me and asked if I wanted to take part. I thought, why not? I like music. I’ve been involved for four years now.

How did you take to being a DJ?

At first I sounded so robotic on air, but it comes more naturally now. I occasionally bring my husband on the show too, which is always great as we banter back and forth and infuse a lot of humour into the show. I often share stories about my personal Parkinson’s experience and it’s so nice when people write in saying ‘this happens to me all the time too – I thought it was just me!’.

I also interview people, everyone from fellow Parkies to people who have written books about the condition to my water aerobics instructor. I basically try to find people who are interested in being on the show and will provide something for my listeners.

How long do you spend preparing for your set?

It can take between one hour and one week. It depends if I choose a theme – which can be everything from 70s classics to songs with the word ‘travel’ in them.

What does music mean to you and how does it help with your Parkinson’s?

Meaningful lyrics are really important to me. They make me reflect on things, reminisce about the past and wonder what the future will hold. Music often makes me realise how fortunate we all are. I think people can relate to lyrics more than they can relate to having a discussion and generally, music brings out a lot of emotion in me.

How has joining Radio Parkies changed your life?

I’ve made so many friends and I’ve reached people with Parkinson’s across the world – that gives me a lot of joy. Joining Radio Parkies gave me a renewed sense of accomplishment after I stopped working. It’s now my ‘job’ and I love every second of it.

I realised one day that I have this disease – I’ll never know the reason why – but I can put it to good use. So, it just goes to show, something good always comes out of something bad.

What’s the hardest part of being a DJ with Parkinson’s?

Sometimes I get very tired and I often experience speech difficulties. As the day goes on it becomes harder and harder to speak. Then I get really stressed if my voice doesn’t sound right on air. On those nights I generally get my husband to join me on the show, to ease the load a bit. But it’s frustrating as the quality of your voice on the radio is obviously pretty important.

What would you say to someone who is considering tuning in?

Not only does music help you feel good, but if you need to exercise then you can have a dance while listening. We can offer you words of encouragement about your Parkinson’s journey or you can just sit back, relax and enjoy the music.

A roundup of Parkinson’s news stories in February