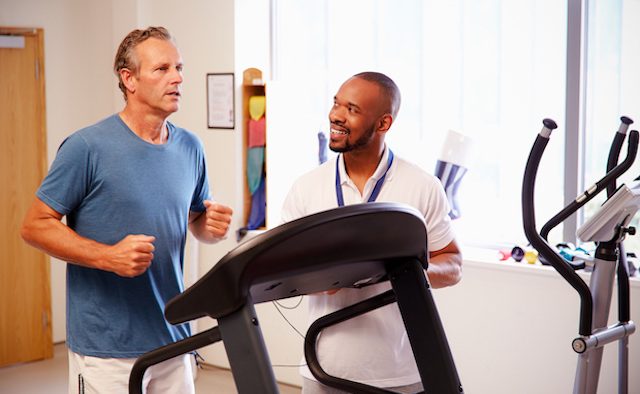 A clinical research trial in the US and Canada will test the impact of high-intensity treadmill exercise on Parkinson’s disease in people who have not started treating the condition with medication.

The study will enroll 370 people with the condition between the ages of 40 to 80. Participants will be randomly assigned to complete moderate-intensity or high-intensity training on a treadmill – and will be assessed over a two-year duration. The researchers will investigate whether endurance exercise decreases symptoms of Parkinson’s disease and delays its progression.

Daniel Corcos, principal investigator of the study, said: “Endurance exercise is the only treatment with evidence for slowing Parkinson’s disease progression.

“If the trial shows high-intensity exercise delays the rate at which Parkinson’s disease progresses, physicians will have a clear guideline to prescribe exercise as a means to slow progression.”

A study by researchers in Singapore has revealed that patients who have been diagnosed with Parkinson’s disease may have a rare neurodegenerative disorder called NIID.

NIID is caused by a gene mutation and presently has no effective treatment. Its symptoms include dementia, Parkinsonism, poor balance and numbness and weakness in the limbs. The researchers studied more than 2,000 people – and found NIID-causing mutations in people diagnosed with Parkinson’s disease.

Professor Tan Eng King of the National Neuroscience Institute, Singapore, said: “With what we know now, it might be beneficial for clinicians to be watchful of early cognitive impairment or imaging evidence that may suggest NIID in patients diagnosed with Parkinson’s disease. As NIID is caused by a genetic mutation, it also may be worth looking out for family members of Parkinson’s disease patients who may show signs of NIID.”

In light of increasing demand for telemedicine during the coronavirus pandemic, a team of researchers in the US are developing technological tools to virtually assess speech disorders related to Parkinson’s disease.

As part of the study, the researchers are collaborating with US startup company Modality AI which has developed an artificial intelligence platform. The goal of the study is to assess how the platform can collect data on and automatically measure the speech skills of people with Parkinson’s disease.

Andrew Exner, a graduate research assistant at Purdue University, US, who is leading the virtual study, said: “The application of the technology we are evaluating may lead to far-reaching insights into more standardisation in assessments, earlier diagnoses and possibly an easier way to track discrete changes over time to guide interventions.

“My personal research passion, and the mission of our lab, is to find ways to improve the quality of life for people with Parkinson’s and other related diseases.”

An Amazonian tea component stimulates the formation of new neurons

A natural component in the Amazonian tea ayahuasca can promote the formation of new neurons, say researchers at the Complutense University of Madrid, Spain.

The component in the tea, called dimethyltryptamine, induces the formation of new neural cells and could have potential benefits for a range of neurodegenerative conditions, including Parkinson’s disease.

As part of the study – published in research journal Translational Psychiatry – the researchers reported on a four-year experimentation on mice which found that those treated with the component exhibit “a greater cognitive capacity”.

José Ángel Morales, a researcher at the university, said: “This capacity to modulate brain plasticity suggests that it has great therapeutic potential for a wide range of psychiatric and neurological disorders, including neurodegenerative diseases.”

A device developed by researchers from the University of Luxembourg can mimic the brain cells affected by Parkinson’s disease – and could help find new treatments for the condition.

Described in the science journal Organs-on-a-Chip, the device can simulate the workings of neurons in people with Parkinson’s disease. It is hoped that by testing drugs and therapies on these chip devices, animal testing can be reduced, and drug development can be accelerated.

Jens Schwamborn, lead author of the study, said: “We have created human neurons that are in an environment, more similar to the one of the human brain. These can help us get closer to understanding what happens in Parkinson’s disease and develop more effective treatments.”

The abstract painter tells us about his Cure3 Exhibition art