A lot of people have got this, and I think some people choose not to say anything about it and that’s their choice, but it sometimes can have difficulties 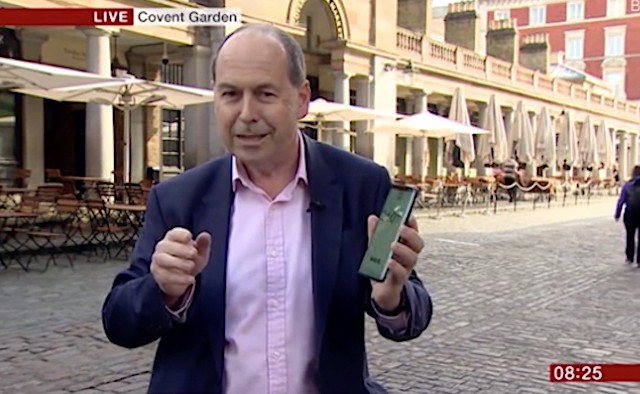 After appearing on a live broadcast with a visibly shaking hand, veteran journalist Rory Cellan-Jones decided to go public about his Parkinson’s diagnosis – leading to an outpouring of praise and thanks for his honesty

The veteran journalist, 61, was seen shaking live on air as he delivered a technology report on UK television show ‘BBC Breakfast’.

Many fans expressed their concern about Cellan-Jones’ shaking hand on Twitter – with some encouraging him to visit a doctor.

Shortly after, the news reporter revealed that he had been recently diagnosed with Parkinson’s – but assured fans that he was receiving good treatment and was looking “onwards and upwards”.

A couple of people have noticed my hand shaking in my live 5G broadcast today. So seems a good time to reveal that I’ve recently been diagnosed with Parkinson’s. I’m getting good treatment and the symptoms are mild right now – so I’m carrying on as normal. Onwards and upwards!

The tweet – which has since received over 1,400 retweets – led to a flood of supportive messages from social media users.

Fellow BBC news reporter Adam Fleming praised Cellan-Jones for being so open about his condition.

And true public service to be so open about it. Best wishes.

UK member of parliament Rupa Huq also shared her best wishes, offering to help Cellan-Jones with anything he may need.

Want to echo all the best wishes and hope treatment all goes well. Let me know if anything I can do at all as MP or just human

Others remarked on how Jones’ positive attitude and courage would undoubtedly bring comfort to others in a similar position.

Well said Adam. Took courage for @ruskin147 to share his diagnosis, yet will help others in similar situation.

Members of Parkinson’s community also highlighted how openness about the condition – demonstrated by high-profile figures like Cellan-Jones and Billy Connolly – represents a shift in how the disease is perceived. Twitter user annif007 commented: “When my grandpa was diagnosed in the 70s it was hidden away. Thankfully times have changed”.

All good wishes to you, and huge respect for your attitude and openness which will surely bring comfort to others as well. Hope the treatment continues to go well.

On speaking publicly about his diagnosis, Cellan-Jones explained that he “wanted to be frank about it” and urged other people with Parkinson’s to do the same.

He said: “A lot of people have got this, and I think some people choose not to say anything about it and that’s their choice, but it sometimes can have difficulties. People can make the wrong assumptions”.

Cellan-Jones described feeling “overwhelmed but gratified” by the responses he received, and that it showed the true power of social media.

Since confirming his Parkinson’s diagnosis, Jones revealed he has also been receiving treatment for a cancerous tumour in his eye which was discovered in 2005. He plans to continue working for the BBC.

A lot of people have got this, and I think some people choose not to say anything about it and that’s their choice, but it sometimes can have difficulties