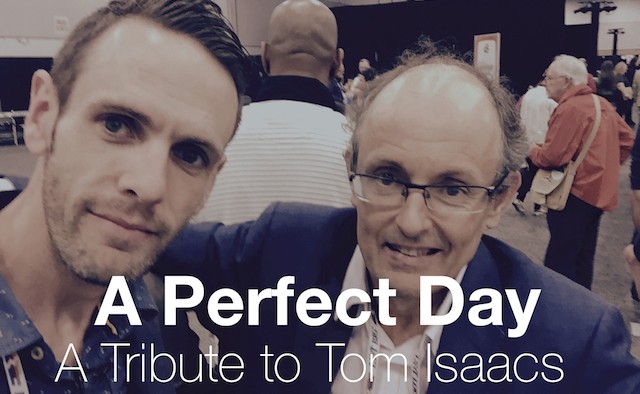 Earlier this year Parkinson’s community lost a prominent international campaigner, Tom Isaacs, who lived with Parkinson’s and co-founded The Cure Parkinson’s Trust. Tributes poured in from around the globe, which led UK-based Parkinson’s campaigner David Sangster to produce a special rendition of ‘Perfect Day’ by Lou Reed, featuring more than 60 people with Parkinson’s

When the news spread about the sudden and untimely death of Tom Isaacs, co-founder of The Cure Parkinson’s Trust, campaigner David Sangster was reminded of Tom’s love for music –and decided to put together a video tribute featuring dozens of people with Parkinson’s.

David said: “The song ‘Perfect Day’ has always been a favourite of mine. I was inspired by the original version, in which many popular artists were brought together. This made me think, why couldn’t people with Parkinson’s and the wider Parkinson’s community contribute in this way?”

David had met Tom a few times over the course of the last few years and was one of the many people with Parkinson’s in attendance at one of Tom’s last public speaking appearances in April.

“Tom was an inspiration for so many of us living with Parkinson’s. His sense of optimism, his determination, vision and fun were not just attributes one would use to describe Tom, but equally they were tools he would always use to good effect when he spoke publicly, like he did just weeks before his untimely death when I spent some time with him and The Cure Parkinson’s Trust.

“Before he talked about his pursuit for a cure, he would always refer to his ‘license to spill’ as he tried to explain his dyskinesia resulting in what he promised would be a ‘moving’ speech,” David continued.

Tom loved music and would often replace the words from a popular song to fit around Parkinson’s, research and the hope for a cure for the condition.

David said: “The fact that The Cure Parkinson’s Trust was contacted by thousands of people as the news spread about his unexpected death indicated the impact Tom had in life. So many valued his friendship, his support and his guidance.”

David asked Lindsay Isaacs, Tom’s wife, what he would have made of the video. “She said he would have laughed, and really loved it. ‘Perfect Day’ brought together a mixture of people with Parkinson’s, Parkinson’s charities, Parkinson’s researchers and healthcare professionals that encapsulated all he believed in – that it is only through teamwork that we can find a cure.”

In September, The Cure Parkinson’s Trust hosted a celebration of life for Tom, where David screened the video for the first time.

David said: “We have already had around 1,500 views via YouTube, and the feedback has been so warm and positive. I would love to think that it could be screened each time there is another breakthrough that brings us closer to a cure for Parkinson’s, as, after all, that was Tom’s vision.”

Mike Isles shares his top tips on how to stay safe