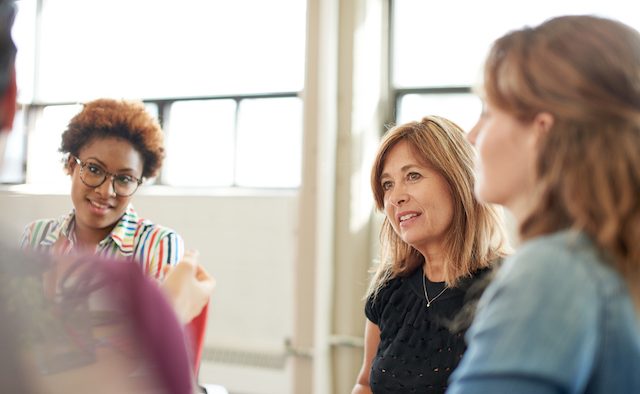 In a recent webinar by the Davis Phinney Foundation, a panel of people with young onset Parkinson’s disease shared their experiences of managing working life – from sharing a diagnosis with an employer to finding the right job. We share four key takeaways from the discussion

The panellists discussed their personal experiences of sharing their diagnosis at work – acknowledging that these could vary widely.

“The biggest question everyone wants to know [the answer to] is: ‘Should I disclose [my Parkinson’s] at work’,” said Amy Montemarano, a lawyer and professor who was diagnosed with the condition aged 48. “It varies so much from person to person and from job to job.”

Erin Michael, who was working as a vice president in sales when she was diagnosed two years ago, said: “I did disclose right away to my manager what was going on because he knew I was having some challenges. The reaction I got was ‘business as usual’ which didn’t necessarily work for me as I was trying to figure out my new life.”

For Erin, changing jobs was a positive experience and she now feels she can be open and honest about her experience of the condition with her colleagues. “At my new job, everybody knows what’s going on and they’re all extremely supportive,” she said.

Former journalist Gaynor Edwards was running a PR and marketing business when she found out she had Parkinson’s. “The reaction from my client base was very mixed,” she said. “Some of them said: ‘Let’s not bother Gaynor, she’s not very well.’

“I kind of came to the conclusion that stress was such a major factor with [Parkinson’s], to dial it down. I relocated and became just a one-woman consultancy­ – it was the best decision I could have made.”

Kevin Kwok, a Davis Phinney Foundation board member, highlighted the importance of “finding something where you can practise your passion and tie it into your work”.

“You could be leading a path that is very rosy, and all of a sudden the rug’s pulled out from under you and you may no longer be on the fast track,” he explained. “And you may have to adjust because I think working in a stressful situation is more harmful to our health. It’s probably the worst thing you can do.”

Kevin cited his own experience, moving from a role as a biopharmaceutical executive to taking on a new healthcare job in patient advocacy – which allowed his experience of the condition to play a role in his work.

“I ended up taking a pivot in my career and actually finding ways to leverage my Parkinson’s by becoming a professional patient advocate,” he said. “I turned my hobby into a job […]. I would encourage everyone to find that place where they can turn their issues into advantages.”

Kat Hill, a retired nurse midwife who was diagnosed aged 48, suggested that flexibility was key to managing working life while living with Parkinson’s. Kat said the “healthy decision to step back” was the right choice for her, and her family has found “creative” ways to stay on top of finances – for example, through renting their home.

“Looking at your resources in a broad sense – not just what you take home from your job – may help you to leverage what you can to move forward with your diagnosis,” she said.

However, the panellists highlighted that many people with young onset Parkinson’s do not have the choice to stop working. Kat suggested that flexible working could help them to manage symptoms – moving away from the traditional structure of the working day to allow them to take longer breaks if needed.

Erin added that as someone with an ambitious personality, redefining success was crucial for her – and reflected on the importance of “not feeling guilty when I do have to take a break or when I have to shut down an hour earlier than expected because I am tired”.

4. Don’t be too hard on yourself

Writer and Parkinson’s advocate Heather Kennedy said that people living with Parkinson’s needed to be kind to themselves – something that could be difficult in a competitive work environment. She said that taking a “slow and steady” approach to work is important.

“We are so incredibly hard on ourselves,” she explained. “We feel like we have to go above and beyond and do more just to keep up because our clock is ticking so quickly. We’re watching our capabilities change daily, hourly – and they fluctuate. […] And employers will notice if we don’t feel confident in a role.”

Amy added that being vulnerable in the workplace could inspire confidence. She said she wanted to show her students that, in spite of living with health conditions that may be associated with being “physically weak”, “you can become a highly functioning adult and do whatever it is you want to do in a kick-ass way”.