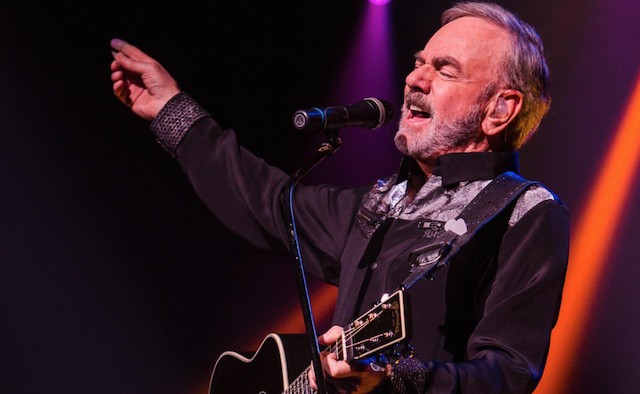 Neil Diamond, one of the top-selling solo acts in the world, and David ‘Kid’ Jensen, a veteran radio DJ have both announced this month that they are living with Parkinson’s

Neil Diamond, one of the world’s top-selling singer-songwriters, announced that he will no longer be touring due to his Parkinson’s.

Diamond was due to visit Australia and New Zealand in March as part of his current tour, but the musician’s website stated that “the onset of the disease has made it difficult to travel and perform on a large-scale basis”.

Diamond’s wife and manager, Katie Diamond, tweeted that fans in Australia and New Zealand were donating their ticket refunds to support Parkinson’s charities. Neil Diamond retweeted that message, and himself wrote: 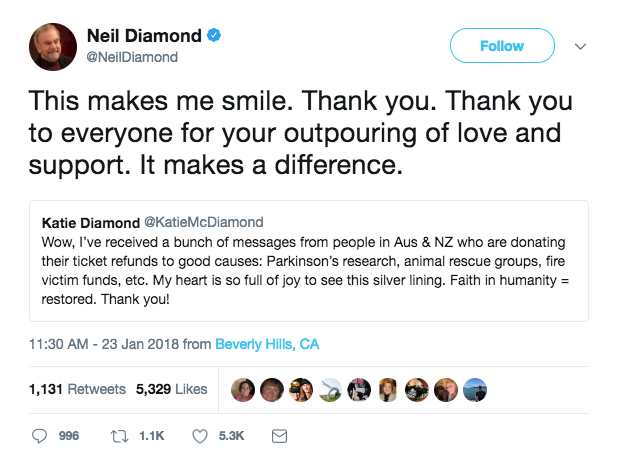 Diamond said in a statement: “It is with great reluctance and disappointment that I announce my retirement from concert touring. I have been so honoured to bring my shows to the public for the past 50 years.”

Diamond assured fans that they haven’t heard the last from him, saying: “I plan to remain active in writing, recording and other projects for a long time to come.” He thanked his “loyal and devoted audiences around the world”.

The announcement was made just before Diamond’s 77th birthday and two weeks after it was announced he would receive a Grammy Lifetime Achievement Award this coming summer. 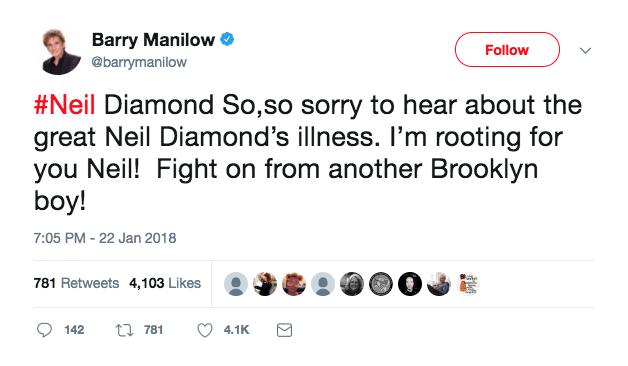 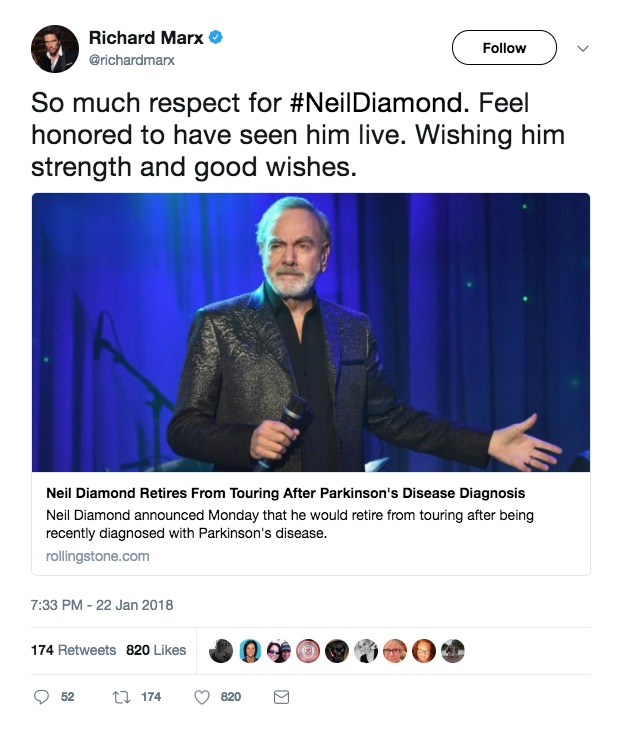 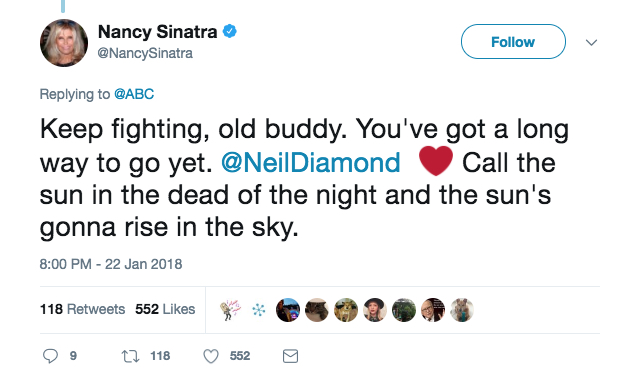 Earlier this month another well-known figure, DJ David ‘Kid’ Jensen, revealed that he’d been living with Parkinson’s for five years. 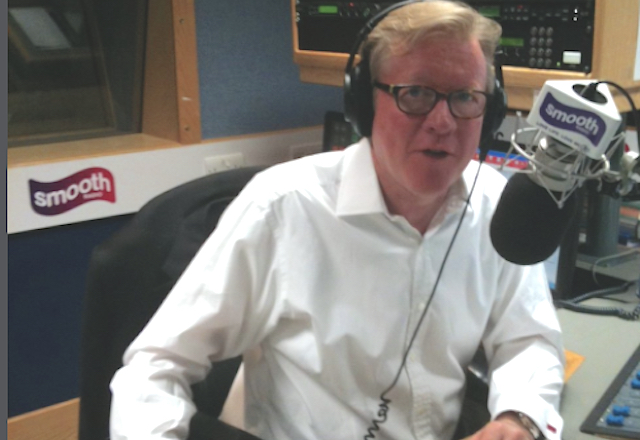 The former Radio 1 DJ and Top of the Pops presenter, 67, says he felt “lonely in a crowded room” after hiding the condition form everyone, including close friends.

Having now made the decision to go public to raise awareness and increase efforts to find a cure, he spoke to UK TV programme ITV news.

Jensen said: “As I go through this period of uncertainty it’s important for me to get out there and spread the word about Parkinson’s and let people know about the disease.

David admitted the condition left him depressed – but thanked his wife, Gudrun, for keeping his spirits up.

He added: “I have been married to her for 43 wonderful years – my three children and seven grandchildren, who are all aware that I have Parkinson’s and continue to provide so much love, support.

“My wife is also full of Icelandic tough love and she ensures I get out and do my walking and do exercise, because exercise is really important.”

Watch Jensen speak publicly for the first time about how he has lived with Parkinson’s below. 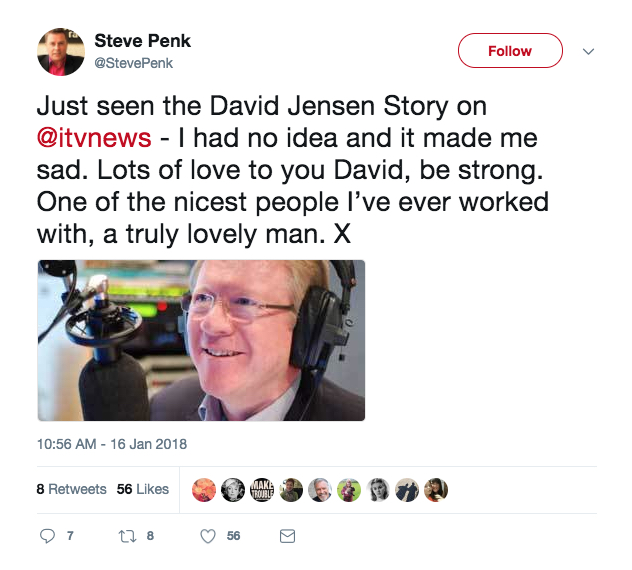 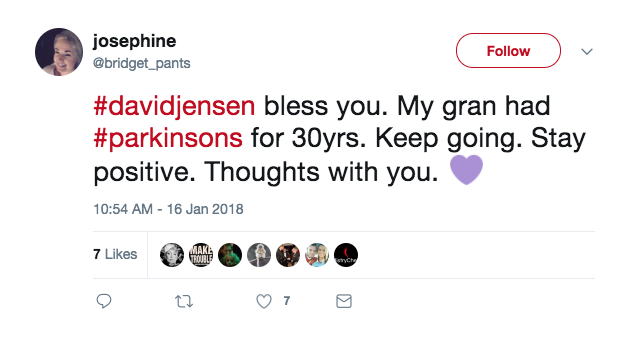 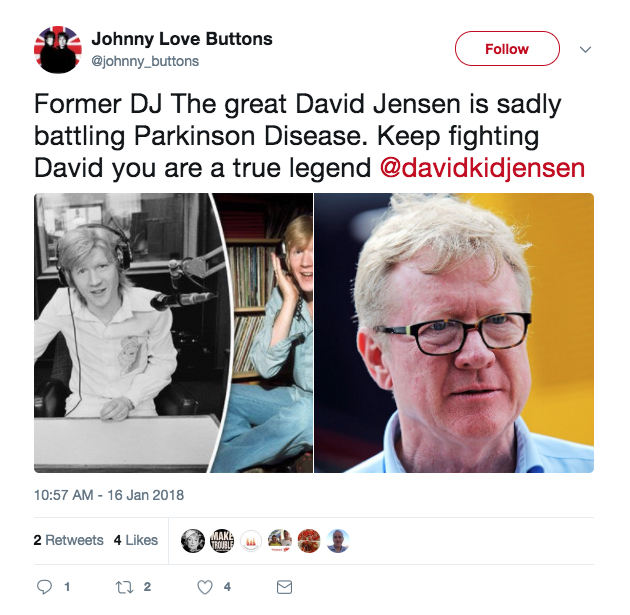 Jensen went on to say: “It’s an opportunity for me now to put something back, in the sense that I’d like to share my experiences with Parkinson’s with people who are either just going through it, or are fearful they might be.”

He added: “Don’t be afraid, don’t be scared, come on-board, enjoy the journey, we’re going to have fun together.”

Read more: 13 famous people you didn’t know had a connection with Parkinson’s

Could a cough medicine help slow the progression of Parkinson’s disease?

Researchers say this trial is “a big step forward”