If you have Parkinson’s, you’ll recognise it straight away – it’s all to do with how we feel and not necessarily how we look 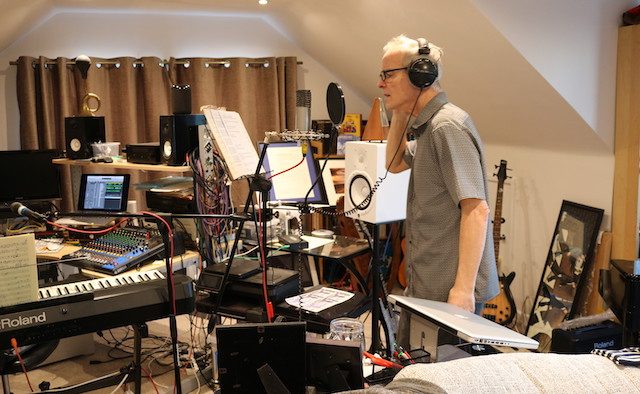 Tell us about your album, ‘Out My Head’.

Parkinson’s is more complicated the older you get, and that’s what the album’s about ­– all the symptoms, all the feelings you get and the strange ways that people start to treat you. If you have Parkinson’s, you’ll recognise it straight away – it’s all to do with how we feel and not necessarily how we look. The message for those with Parkinson’s is ‘you’re not alone’.

The condition came along when I was about 54. It started off in the shower ­– I was trying to rub my back and realised my left arm wasn’t working very well. I went to the piano and I thought, “actually, it’s falling behind the right hand”. My doctor referred me to a neurologist in Nottingham, who said: “Have you ever heard of Parkinson’s disease?” It wasn’t a very nice moment.

Parkinson’s can take you to dark places in your head. It’s not the shaking and it’s not the stumbling or falling – it’s the phases of nightmares and sleeplessness. That’s where I was at the time I started to write my album two years ago. Parkinson’s impacted my piano playing – so the only thing left to me now is to write music.

It’s not all doom and gloom. There’s a lot of humour to be had – we get ourselves into some interesting situations! If you can find a reason to laugh, you’ve got to take it.

I’m a retired music teacher, but a full-time musician. I’ve worked with lots of young people over the years through choirs, classroom teaching and practical music making. I wrote music for amateur and professional theatre and used to direct and write music for Derby youth theatre. I was a busy bloke.

That’s where my MBE – an order of the British Empire award – came from. When I received the letter, I thought it was a joke actually because it was all typed out like on an old typewriter. Prince Charles gave me the award and it was very special.

Why did you choose to feature a range of different genres and styles?

It was a conscious decision to explore different styles. The fascinating thing about Parkinson’s is that all sorts of different talented people and all different types of character can get it. The different styles reflect these different people. There’s going to be something for everyone – there’s folk, modern rock and a bit of country ­– there’s even opera in there.

How has music been important to your experience of Parkinson’s?

Sometimes it’s almost miraculous. I’m working on a new album and I put it on the other day. To be honest, I couldn’t walk at the time. I literally had to crawl because I was so worried about falling over ­– one of these days I’m going to fall straight through the drum kit! I put this track on, and it motivated me so much that I was able to snap straight out of it. And by the end of the track, three minutes later, I was dancing. I could even dance on one leg.

What role do you think that music can play during the coronavirus crisis?

Music can shake up our emotions and also straightens them out. I love dancing around the studio listening to a track that I have just recorded. A Beethoven symphony or a Benjamin Britten opera, or the White Album can all take me to a special place in my head that Parkinson’s can’t get to.

Take some time out to plan some making and listening time for music. It does not matter how skilled you are, what experience you have, what style, where in the world the music originates, whether you are making music or listening or dancing – or all of these simultaneously. Just do it. Music, however you engage with it, will help you through.

I’d like to raise more money for Parkinson’s research. 50% of anything I make on the album is going to a charity for Parkinson’s and if there’s any profit, the rest is going to be invested in my next album. I’d like to take it to a professional studio and producer, because collaboration has always been the key to the best things I’ve done.

Do you have a message for people with Parkinson’s at the moment?

My hope for Parkinson’s community is that the science and the determination of humanity to find a vaccine to stop the coronavirus, will continue to advance and find a cure for Parkinson’s and all other disease. It’s ambitious, as well as hopeful – but we can do anything if we all put our minds to it.

You can listen to Tony’s album, ‘Out My Head’, on Spotify, YouTube, Apple Music and iTunes.

To find out more about Parkinson’s and creative therapies, please visit the Parkinson’s Europe website.

Tony Coffey from Guernsey, Channel Islands, was diagnosed with Parkinson’s in 2009. He retired as a music teacher aged 60 – a year after receiving an MBE for services to education in 2014. His album ‘Out My Head’, dedicated to the carers of people with Parkinson’s, features 18 tracks about his experience of the condition.

If you have Parkinson’s, you’ll recognise it straight away – it’s all to do with how we feel and not necessarily how we look

We spoke to the artist portraying Parkinson’s symptoms